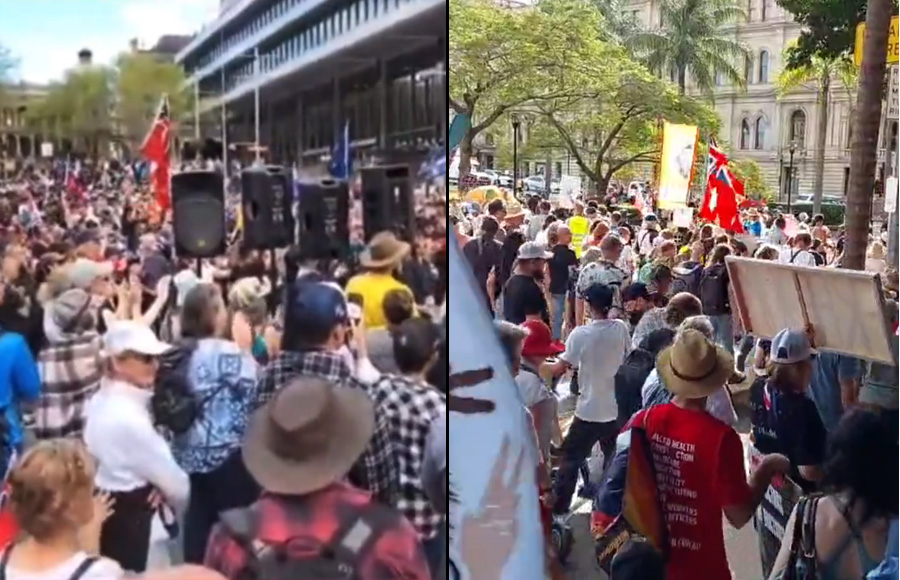 PORTSMOUTH, OH –   The courageous citizens of Australia are uniting in the fight against national and international tyranny. Their feet are marching for freedom to expose the Great Reset cabal (aka World Economic Forum, New World Order, Fourth Industrial Revolution) and their corrupt turncoat leaders for all of humanity to see.

A recent article in the informative TOTT News, an Australian media source, featured myriad tweets, video clips, and photos across the country of patriots standing up for freedom.

Likened to American mainstream media outlets, the press has been paid off or silenced in Australia as well.

A video clip features police officers turning in their badges because they refuse to arrest innocent citizens speaking out for freedom and against vaccine mandates.

Police officers, law enforcement and soldiers in every free nation need to unite and stand against tyranny and treason. And refuse to arrest citizens gathering for peaceful demonstrations against vaccine mandates and socialist government.

Watch the peaceful march of The Peoples Revolution rally in Brisbane Australia. “The people united will never be divided!” was their freedom chant.

Global citizens must unite, but not for a one-world governmental empire based on a combination of communism/fascism/Marxism with a self-appointed dictator – but for each nation’s independence and freedom for the people.

Applause, support and prayers for Australia. My hope is that American citizens will follow in the footsteps with continuous peaceful protests and rallies for freedom against the Deep State agenda that is in the process of kidnapping Democracy in our liberty land and destroying our U.S. Constitutional Republic. And may God bless America – again.

America needs a Peaceful Peoples Revolution with crowds that gather with flags, signs, music, Bible and prayer in their states, cities, and counties – We The People. God’s Truth is a mighty weapon.

Whether conservative or liberal, all freedom-loving Americans that value life and liberty need to vote against the Team Biden regime (aka Deep State, shadow government, New World Order) in November and in 2024.

Ukraine’s first lady attends funeral of Queen Elizabeth II as war rages in her country: “She wished us better times”

49ers’ defense delivers on its goal of dominance vs. Seahawks

What can we expect from Friday’s mini-budget?