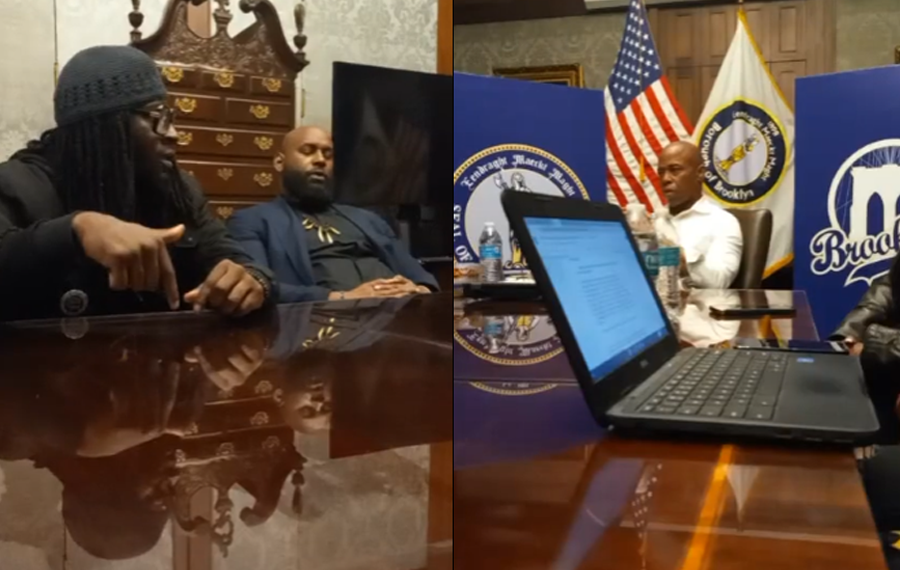 NEW YORK, NY – We truly have pity on New York City’s Mayor-elect Eric Adams, who can’t even enjoy any kind of an post election honeymoon with likes of the rabid Black Lives Matter dogs snarling at his ankles with threats of outright violence against the citizens of his city. Eric was also outright ridiculed by local BLM leader, Hawk Newsome, who was quoted last Wednesday, before a closed meeting with the Mayor-to-be, as saying, “We don’t believe in good cops,” knowing full well, that Mr. Adams served for 22 years as a NYC cop. To make matters worse, this Newsome guy (basically a local thug), after being given the courtesy of a pow-wow with the soon to be mayor of the world’s greatest city, had the chutzpah and temerity to threaten that if Adams as Mayor, even attempted to restore law and order to the Big Apple, he would call out his terror-ready street troops. His words: “If they think they are going back to the old ways of policing, then we’re going to take to the streets again. There will be riots. There will be fire and there will be bloodshed.” Makes your hair stand on end.

Who is this Hawk guy? He’s a controversial black, NY figure who has called members of the U.S. government “terrorists.” He tells his crowd that our “government goes and pillages different countries.” Sounds like his interests extend as well, into international affairs and makes us wonder if he gets any financial support from the likes of China, North Korea, Cuba or Russia? Think about foreign infiltration into our nation from our enemies, using domestic terrorist groups like BLM as their agents?

To us and to all New Yorkers, he has spoken an outright threat to terrorize, intimidate and even murder innocent people. This is a warning that if Adams attempts to restore law and order to the city by increasing funding for the NYPD and follows through on his pre-election promise to reinstate plainclothes police anti-crime units that DiBlasio terminated, and as well, revives the now dormant strategy of “stop and frisk,” the BLM domestic terrorists will close down the city with a violent crime wave. The residents of the city cannot, will not and must not live under these threats. They’ve done it before. And thankfully, Mr. Adams seems to indicate he will not be cowed by these low lifes. He spoke directly to Thug Newsome: “You’re on the ground. Stop the violence in my community. I’m holding you responsible.”

Mr. Adams was elected to clean up the city. We’re nearly broke. Crime is exploding. Our schools are not punching out college ready students. Retailers are fearful of more street violence. The money’d people are leaving for more welcome states in the south, taking with them their tax money, business acumen and civility, all for a better life style for their families. This exodus must be stopped. Frankly, the “Fun City” is going down the drain. Most New Yorkers supported the candidacy of Eric Adams because they believed in his words promising to bring us back to the greatness of earlier times. We will continue to support him and I urge all of us, of all political stripes, colors, religions and ethnicities to back Mr. Adams in his attempts to revive our beloved city. He needs us… and we need him. Don’t let him (and us) down.