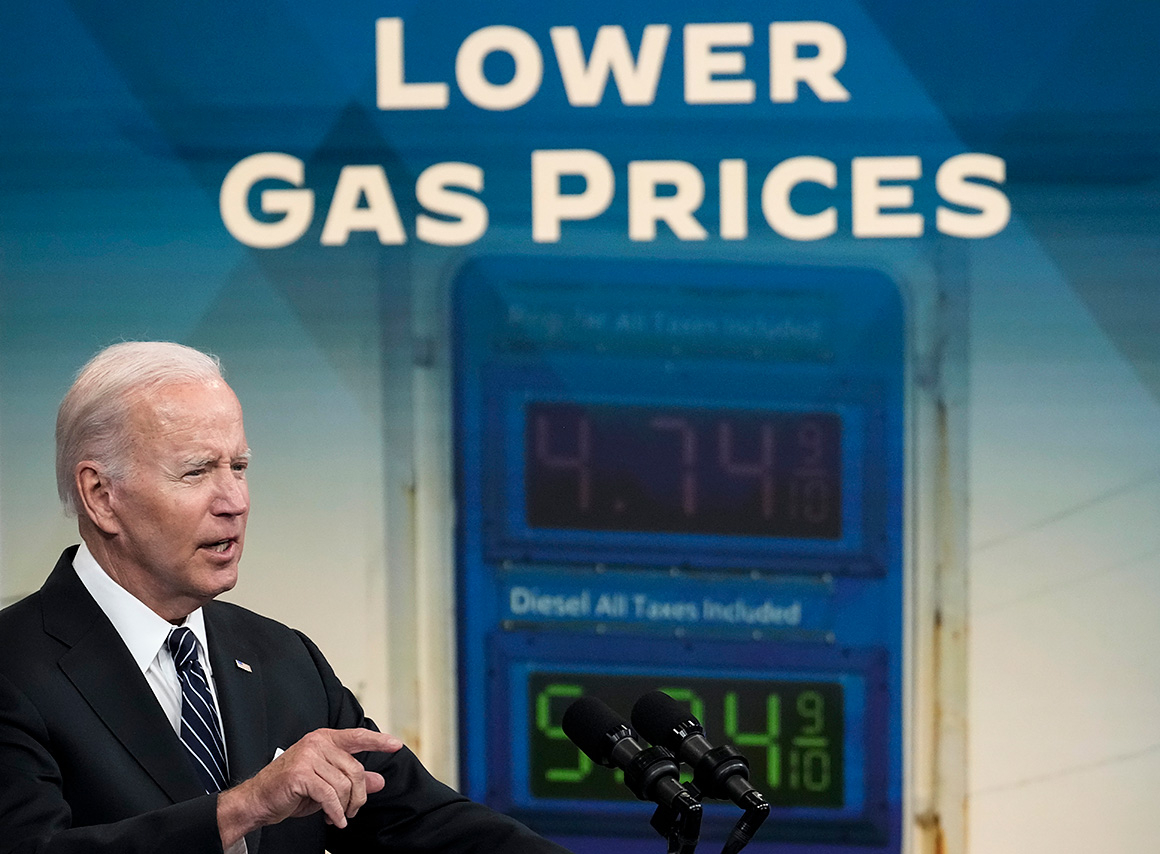 Democratic leaders in Congress wouldn’t commit yesterday to a vote on President Joe Biden’s plan to suspend the federal gas tax. They instead suggested that the best way forward was to go after the profits of big energy companies.

Biden proposed a 90-day suspension yesterday of the 18.4-cent-per-gallon federal tax on gas and the 24-cent-per-gallon tax on diesel to provide “immediate relief.” He suggested if the federal breaks were coupled with state gas tax cuts and increased refining by energy producers it could cut record-high gas prices by $1 per gallon (E&E News PM, June 22).

But both House Speaker Nancy Pelosi (D-Calif.) and Senate Majority Leader Chuck Schumer (D-N.Y.) stopped short of saying they’d craft legislation and bring it to the floor for a vote.

Both have raised concerns that there is no guarantee energy companies would return the tax cut to consumers. They also noted the current tax is the main revenue source for the federal Highway Trust Fund, which funds infrastructure projects nationwide.

“We will see where the consensus lies on a path forward for the President’s proposal in the House and the Senate,” Pelosi said in statement yesterday after Biden’s announcement.

Asked if the proposal could pass the House where Democrats hold a narrow five-seat majority, Majority Leader Steny Hoyer (D-Md.) said yesterday, “I don’t know that we have the votes.”

Schumer said yesterday that Republicans have blocked gas tax suspension bills in the past. He suggested the “most important thing we can do to lower gas prices is crack down on Big Oil’s manipulation of the oil markets.”

Schumer had previously said that the Senate would hold a vote, but a similar FTC-themed bill tied in a Senate committee last month (Greenwire, May 25). Schumer has not said whether he plans to push the all-but-doomed bill.

Democratic leaders and many rank-and-file members said their preference would be to take aim at the profits of oil companies that have soared amid global fuel shortages.

“Democrats are united in our determination to lower gas prices for families at the pump. It is unacceptable that American families are being squeezed at the pump while Big Oil rakes in massive profits at their expense,” Pelosi said.

Transportation and Infrastructure Chair Peter DeFazio (D-Ore.) said he would oppose any cut in the federal fuel tax because it would be “degrading” the nation’s ability to pay for overdue infrastructure projects. He cited studies that showed most dollars from fuel tax cuts are never returned to consumers.

DeFazio called for lawmakers to get behind his proposal, H.R. 7099, for a windfall tax on energy company profits that would be rebated to consumers monthly.

But a windfall tax alone is seen as nonstarter in the evenly divided Senate and some centrist House Democrats have suggested putting more money in consumers’ pockets would only add to inflation.

Hoyer noted that Rep. Adam Schiff (D-Calif.) has proposed legislation, H.R. 7926, to address concerns about energy companies pocketing any reduction in the federal gas tax. Schiff’s bill would suspend the gas tax and then refill the federal Highway Trust Fund with a windfall tax on energy companies.

Ways and Means Chair Richard Neal (D-Mass.), who also isn’t ready to back Biden’s plan, said Schiff’s proposal and similar ideas were floated at Democratic caucus meeting yesterday without any consensus. He said staff is continuing to study the idea.

“What we gotta figure out is who gets the money,” Neal said. “If it’s a tiny savings for the consumers and big savings for the oil companies that does not accomplish the goal.”

Natural Resources Chair Raúl Grijalva (D-Ariz.), also a leading progressive, said he would back the gas tax repeal but cautioned it’s not a “panacea.” He also warned it would be “difficult” to pass the House given concerns over the Highway Trust Fund.

“I think it’s a necessary gesture right now for families and consumers,” said Grijalva, who said he also supports a windfall tax.

Republicans meanwhile dubbed the idea a “policy gimmick,” noting former President Barack Obama made the same comment on the idea of a tax holiday during his 2008 presidential run.

The GOP opposition likely dooms any chance for the tax holiday in the Senate.

“The administration of course is coming up with yet another gimmick, another Band-Aid and something they know is dead on arrival up here in Congress,” Senate Minority Whip John Thune (R-S.D.) told reporters. “The president knows it, Democrats know it up here, and I think from what we’re told, they have conveyed that to him.”

Republicans have used rising energy prices to bludgeon the Biden administration, arguing that by embracing climate policies they have negatively affected the domestic supply of oil and gas resources. Instead, they argue, the White House should be working to build out fossil fuel infrastructure and expand access to federal lands for oil and gas producers.

Republican leaders have already vowed that addressing energy needs would be one of their priorities, should they win control in the midterm elections.

Industry groups and interest groups normally at odds with one another came out against the proposal too.

The Americans for Transportation Mobility Coalition and the Transportation Construction Coalition, a collection of building, manufacturing and business trade groups like the U.S. Chamber of Commerce that backed last year’s infrastructure bill, wrote Biden yesterday warning against the plan.

“Gas tax revenues are fundamental to the solvency of the Highway Trust Fund, which helps fund these critical transportation programs. Support for a gas tax holiday risks undermining funding for these efforts, which is essential for our economy’s long-term, sustained growth,” the group warned.

From the environmental perspective, Matt Casale, U.S. PIRG’s environment campaigns director, said a gas tax holiday would only “exacerbate our problems” by deepening the nation’s dependence on oil. Instead, he called for a “holiday” on transit fares and investing in cleaner commuting options.

“President Biden should be calling for concrete steps that help Americans save money and also drive us toward a long-overdue off-ramp from oil and car dependence,” he added.

Lanzante To Release A New Project Every Year, Will…

Is Loki In Thor: Love and Thunder?

Warning that inflation means half feel…