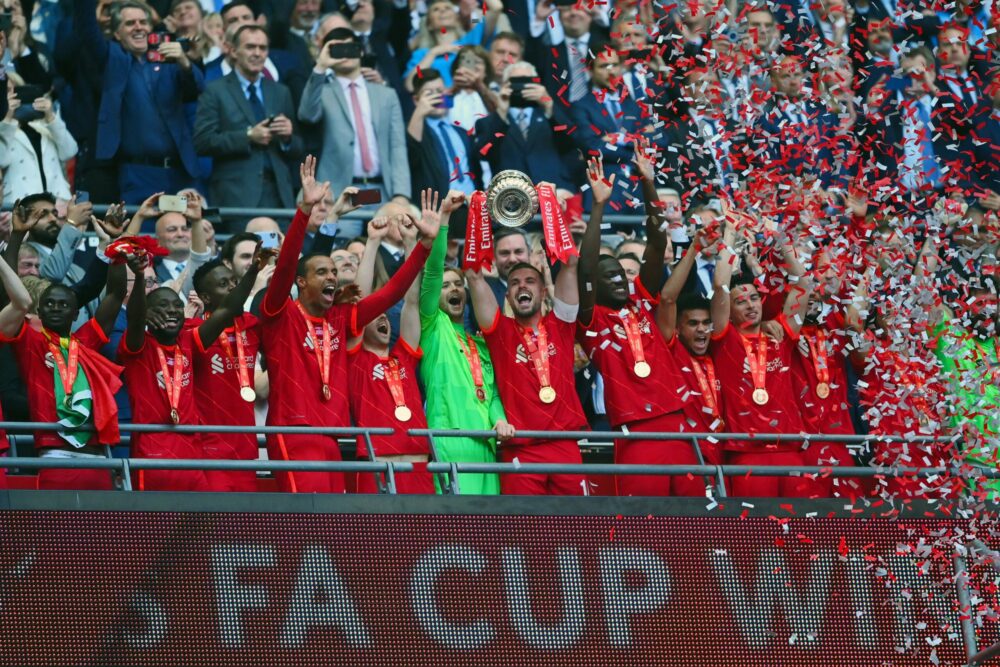 Liverpool claimed the second of their targeted quadruple of titles on Saturday by putting Chelsea to the sword once again on penalties. Substitute Kosta Tsimikas scored the winning penalty after Alisson had saved Mason Mount’s effort.

Chelsea chose to change from their traditional blue to yellow as they tried to combat the final bad luck from their last three visits to Wembley but it failed as they lost a third consecutive FA Cup final-the first team in history to achieve this infamy.

Mateo Kovacic was passed fit to start and Romelu Lukaku started in the center-forward position after Kai Havertz copped an injury in training. Klopp started with Luis Diaz on the left flank while Ibrahima Konate started ahead of Joel Matip.

Liverpool were by far the superior side in the first half with more ball possession and they created more goal-scoring chances. The first five minutes were all Liverpool, with more than 80% of the ball, and camped in the Chelsea half.

Luis Diaz was the main Liverpool protagonist in the opening quarter. In the fifth minute, Diaz beat Trevor Chalobah down the flank and crossed into the Chelsea box, inches away from a diving Thiago. Mohamed Salah headed the second chance over the bar. Three minutes later, Diaz was at it again but both Sadio Mane and Salah failed to connect.

Chelsea were just defending the edge of their box as Liverpool threatened to ride roughshod over them. Mendy made his first big save of the final when he saved Diaz’s shot with his legs. It was not yet 10 minutes on the clock.

In the aftermath, Thiago Silva needed medical attention after getting in the way of Chalobah’s clearance. On 22 minutes Andy Robertson waltzed forward and allowed the freedom of Wembley, he attempted a shot that was high and wide.

Thomas Tuchel was almost tearing his hair out on the sidelines as he continued to shout at his players. Chelsea then sprung their first attack and it should have been scored by Christian Politic, who got on the end of Mason Mount’s clever cutback.

Alisson made a save at Alonso’s feet after Politic drove at the Liverpool defence and split it with a pass. The Liverpool goalkeeper needs treatment after colliding with the onrushing Alonso.

Salah had to be taken off for an injury in the 32nd minute with Diogo Jota his replacement. Pulisic could have done better when he burst into the Liverpool box in the 34th minute as the Blues got a foothold in the match.

Romelu Lukaku got a chance in the box after being fed excellently by Mount but he blasted wide and then a second in added minute but his aim was off target.

The second half saw a more determined Chelsea and they almost took the lead from the kickoff but Alonso’s shot went marginally wide.

Pulisic went close but Alisson smothered his effort. Alonso then curled a free-kick off the crossbar. Robertson was caught in two minds at the back post in the 51st minute.

Liverpool responded through Diaz, who spun and shot just wide. Jota rolled another chance wide on the hour as Liverpool re-exerted their dominance.

On 66 minutes, N’Golo Kante replaced Kovacic, who had fought to be fit for this final. Politic, who had been on the end of Chelsea’s best chances, whipped another effort just wide in the 68th minute.

Klopp sent on James Milner for Baby Keita in the 74th as the intensity went down. His first action was to foul James. The Chelsea defender took his pound of flesh from Thiago and was shown a yellow card.

With five minutes left on the clock, Tuchel replaced Lukaku with Hakim Ziyech and Politic went into the false nine role.

Robertson should have won it at the death but he smashed his effort against the post. Mateo came on for Virgil van Dijk in the first minute of added time.

For the fourth time this season, Liverpool and Chelsea could not be separated after 90 minutes.

The extra time was more of the 90 minutes as both teams created chance after chance but lacked the finesse to convert.

In the penalty shoot-out, Chelsea captain Cesar Azpilicueta missed the second kick while Liverpool stayed perfect until Mendy saved from compatriot, Mane to send the shootout into sudden death.

Ziyech scored and Jota held his nerve but Allisson foiled Mount’s effort and substitute Kostas Tsimikas scored the winner. Liverpool thus claimed the second of the targeted quadruple of titles.