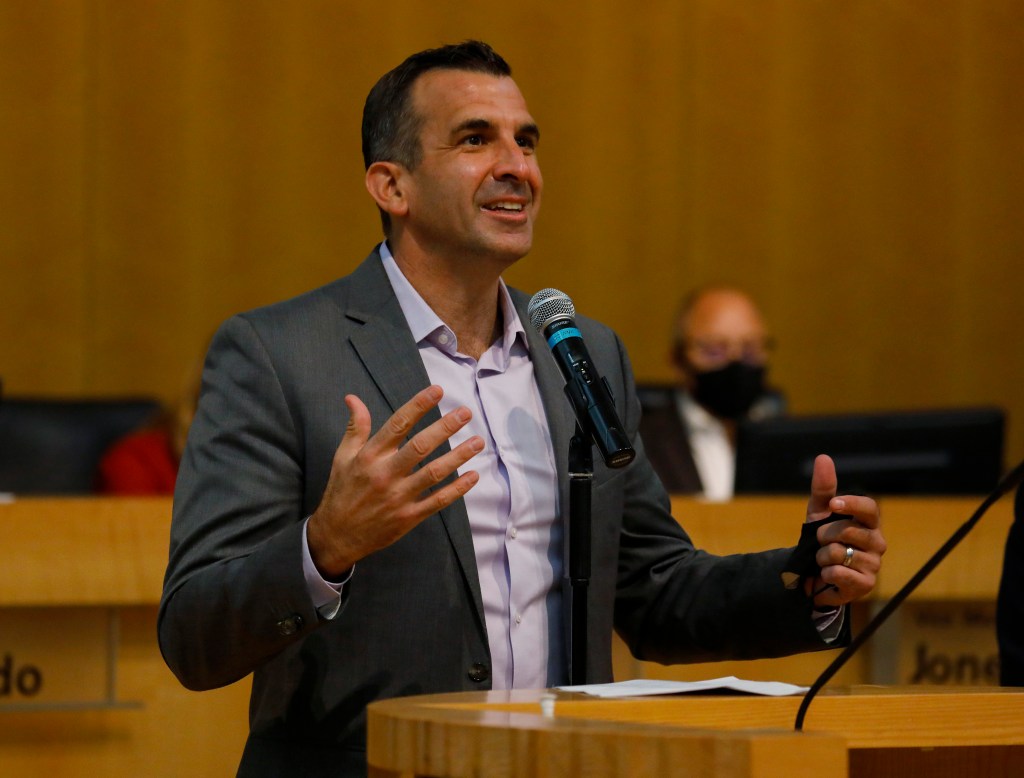 In a move to offset the influence of labor groups, San Jose Mayor Sam Liccardo is tapping into the deep pockets of real estate developers to continue influencing city politics even after he leaves office in a year.

Still, Liccardo says that he created the committee to support candidates who “have the courage to be independent of larger forces.”

“We’re not looking for candidates who toe the line with one interest group or another,” the mayor said in an interview. “We’re interested in supporting candidates who are independent of the larger forces in politics today but have a fundamental belief in supporting jobs and housing in our community.”

Labor leaders, however, see it as a way for the mayor to maintain “business as usual” even after he leaves his post with the city.

“I think this is an attempt by Mayor Liccardo to keep power in the hands of a very small few and particularly, those who prioritize the needs of corporations over people,” said Maria Noel Fernandez, campaign director for Silicon Valley Rising.

The decision by Liccardo to launch his own political action committee, which was first reported by San Jose Spotlight, comes as the 2022 election cycle heats up and follows decisions by other organizations and individuals that typically align with Liccardo to either not endorse candidates or support those that he would be less inclined to.

The San Jose Chamber of Commerce, which was previously known as the SVO and endorsed business-friendly candidates like Liccardo, dissolved its political fundraising arm last year during turmoil over the wake of a racist campaign ad posted by the group. And Carl Guardino, a registered business lobbyist and former head of the influential Silicon Valley Leadership Group, recently endorsed Santa Clara County Supervisor Cindy Chavez, a longtime labor leader, for San Jose mayor. Hence, funds raised by Guardino’s formidable political fundraising committee Innovation for All will be going toward a labor-backed candidate rather than someone more aligned with Liccardo’s values.

In June, primary elections will be held for a new mayor to succeed Liccardo, who terms out next year, and representatives in council districts 1, 3, 5, 7 and 9. Fundraising for those races can officially begin on Dec. 9.

Liccardo has yet to endorse a San Jose mayoral candidate but some suspect his PAC will be backing and fundraising for political newcomer Matt Mahan, a former tech executive who joined the city council in January.

Tom Saggau, the spokesperson for the San Jose Police Officers Association, said it would take “truckloads of money” to prop up Mahan.

“We hope Mayor Liccardo continues his less than stellar Midas Touch streak of supporting failed council candidates like Jim Zito and Lan Diep as well as others like State Senate candidate Ann Ravel with his new PAC,” he said.

The PAC is still forming its board of directors and has yet to endorse any candidates. Liccardo said he does not plan to serve on the board but will play an integral role in fundraising.

Terry Christensen, a professor emeritus of political science at San Jose State University, called it a “usual move” for a sitting mayor to create his own fundraising committee, adding that he has concerns about how much money is likely to be spent on the upcoming mayoral race.

“The more money that gets spent, the more likely it is for a campaign to go negative,” he said. “I’m not saying that’s what Sam will do, but that’s what money often buys — especially independent expenditures.”

Although negative campaigning tactics had been used before, they reached a boiling point in late 2019 when the Chamber’s PAC posted an ad denounced across the board as racist.

The backlash was swift. The organization’s former CEO Matt Mahood stepped down, dozens of well-known board members announced they were leaving and the chamber’s executive board announced it was dissolving its fundraising arm.

The San Jose Chamber of Commerce will not be endorsing any political candidates in the 2022 election nor will it be donating to any candidate or political action committee.  Derrick Seaver, the chamber’s new president and CEO, is adamant that the mayor’s new fundraising group is “not a replacement of the former Chamber or SVO PAC.”

Nevertheless, Seaver confirmed that he did attend Liccardo’s kickoff event.

“I think the topics that the city is facing are of interest to the chamber, but I did not donate to the event nor did the chamber,” he said. “I will be attending any number of candidate announcements over the coming weeks just simply with the intention of bringing information about what issues are facing our cities back to our members.”

Gomez, who ran the SVO PAC prior to 2017, helped start the Silicon Valley Business PAC in 2017 after a group of small and medium-sized businesses decided they wanted to break away from the larger Chamber’s PAC, which they felt focused disproportionately on the interest of large corporations.

In this coming election, Gomez said he expects the Silicon Valley Business PAC and Liccardo’s new PAC to endorse — and put their money behind — nearly all of the same candidates.

“Sam is a person of high integrity, so I expect him to run a very effective, very clear PAC,” Gomez said. “He’s likely going to be very interested in making sure anything like what happened to the SVO PAC doesn’t happen to this one.”

Somy Ali will be back on screen with docu-series…

LEADING OFF: Mets' Scherzer set for MRI on…