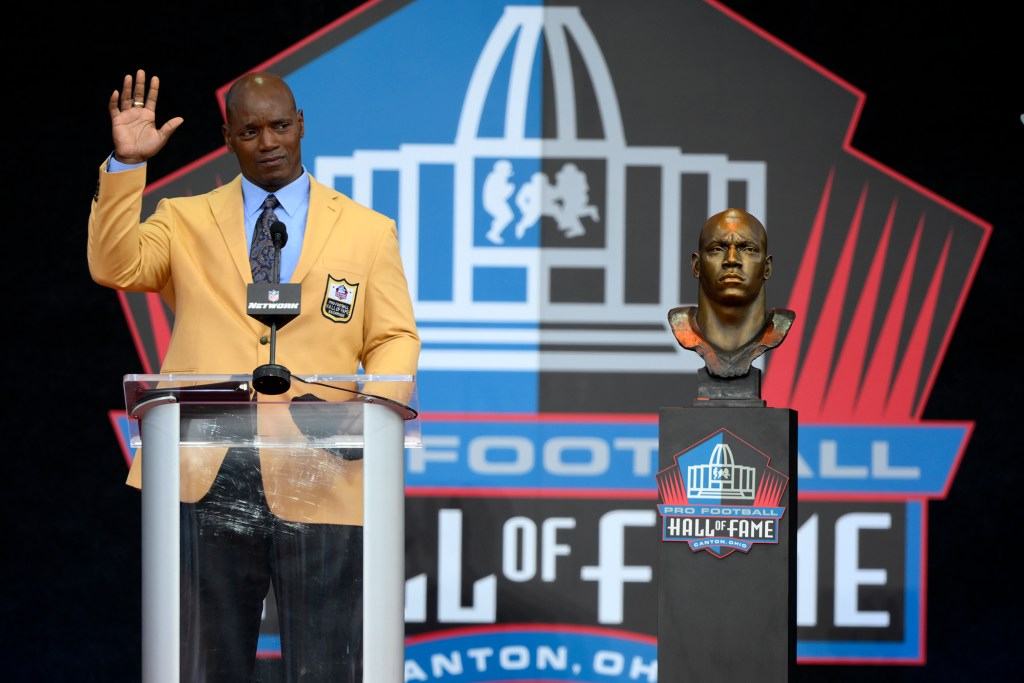 Bryant Young was inducted into the Pro Football Hall of Fame Saturday, and his acceptance speech extolled the virtues of “sacrifice, selflessness and integrity” that marked a 14-year career with the 49ers.

Young made reference to his devasting knee injury in 1998 from which he made a miraculous recovery, but was brought to tears, along with many others in the audience, with an inspirational message about a far greater loss.

Bryant Colby Young, one of six children of Bryant and Kristin Young, died of brain cancer in 2016 at age 16. Diagnosed with a brain tumor at 13, Colby had surgery to remove the tumor and was back at school eight days later.

“His spirits were good. He had the heart of a lion,” Young said.

Colby was told radiation treatments would make playing football impossible, so he concentrated on basketball instead.

“The treatments were hard. Colby showed immense courage,” Young said. “We were really hopeful, and the following October, Colby said, `Dad I have a headache.’ The cancer was back.”

The cancer had spread and Colby’s condition was grave.

“Colby sensed where things were heading and had questions,” Young said. “He didn’t fear death as much as the process of dying. Would it be painful? Would he be remembered? We assured we would keep Colby’s memory alive and continue speaking his name.

“On Oct. 16, 2016, God called Colby home. Colby, you live on in our heart,” Young said as his voice cracked with emotion. “We assured Colby we would keep his memory alive and keep speaking his name.”

An eight-time winner of the 49ers’ Len Eshmont Award as selected by his teammates as the most inspirational player, all of the qualities which made Young such a revered teammate were on display during his 12-minute speech. He was understated but profound, honest and spiritual. In his 10th year of eligibility, Young got the requisite votes in part because a group of offensive linemen that faced him lobbied Hall of Fame voters in Zoom calls.

The audience included Hall of Famers and former teammates Steve Young and Terrell Owens among others. Young becomes the 29th 49ers player to receive a gold jacket.

Young was presented by daughter Kai and former owner Eddie DeBartolo, and in the crowd were his wife Kirsten, his father Tommy and four children.

In 14 seasons, Young set a franchise record with 89 1/2 sacks and as a rookie starter was a key component of the 49ers’ last Super Bowl championship following the 1994 season. Young suffered a broken tibia and fibula in the 12th game of the 1998 season against the New York Giants that not only threatened his career but his ability to walk. Young made a miraculous recovery, playing all 16 games of the 1999 season and being named NFL Comeback Player of the Year.

Young gave credit to his wife for helping him get through a difficult time.

“There were complications. I could have lost my leg,” Young said. “I fought back, playing another nine seasons, but while dealing with my injury, Kirstin was pregnant with Kai. Few knew it at the time. Rather than being cared for, Kristin was caring for me. My vulnerability and loss of control were disorienting. I learned some things about trusting God, living with doubt, accepting help.”

Young closed with lessons he said he learned along the way.

“From my pain I found purpose. Letting someone grab my hand is as important as reaching for theirs,” Young said. “In an isolated world, personal connections matter more than ever. I keep  my gaze on Christ and pour myself into good works, including the Pediatric Brain Tumor Foundation and I’ve learned to live with God’s plan and timing not mine.”

Was there a message in being in the Class of 2022? Possibly. Young said 22 was “Colby’s favorite number.”

Branch, who was elected by the senior committee, was the prototype Al Davis deep threat for the Raiders, catching 501 passes for 8,685 yards and 67 touchdowns form 1972 through 1985. A sprinter out of Colorado, Branch at 5-foot-11 and 170 pounds went from a raw talent to a polished receiver who retained his speed. At age 35, Branch caught a 99-yard touchdown pass from Jim Plunkett.

At age 77, Branch died of natural causes at age 77. While he missed the ceremony in the flesh, Branch’s sister Elaine Anderson noted his presence in giving the acceptance speech for his brother.

“Clifford was delayed but not denied. He never, ever gave up on his dream,” Anderson said. “Today is bittersweet, because we miss our beloved Clifford, and sweet because it is now history. I want to tell you there’s a sweet spirit in this place today. Our Clifford, No. 21, would not miss his enshrinement for nothing. He longed for this day and is seated front and center with Al Davis and John Madden.”

Seymour, 42, played his last four seasons with the Raiders in Oakland where he played in 53 games with 52 starts and 18 1/2 sacks out of his career total of 57 1/2. He was a three-time Super Bowl champion in eight seasons with New England.

“I grew up a huge Raiders fan so spending my last four years in Oakland learning under the late, great Al Davis was an unexpected gift,” Seymour said. “Mr. Davis was a coach, commissioner and Super Bowl champion. Above all else, he was a great leader because he listened to every voice. It didn’t matter if you were a man, woman, black, white, gay or straight. He believed football was a game of values and Mark Davis continues to serve as a beacon today.”

Vermeil, 85, was 120-109 in coaching stints with the Philadelphia Eagles, Los Angeles Rams and Kansas City Chiefs, winning a Super Bowl championship with the Rams following the 1999 season. He was the first special teams coach in NFL history as hired by George Allen in 1969 for the Los Angeles Rams.

He graduated from Calistoga High in 1954, enrolled in Napa Junior College and then attended San Jose State, where he was a backup quarterback in 1956. His first head coaching job was at Hillsdale High in San Mateo.

“Thanks to two San Jose State football coaches who saw talent in me I didn’t see in myself,” Vermeil said. Six players from Hillsdale attended the ceremony.

Denial of responsibility! Yours Bulletin is an automatic aggregator of the all world’s media. In each content, the hyperlink to the primary source is specified. All trademarks belong to their rightful owners, all materials to their authors. If you are the owner of the content and do not want us to publish your materials, please contact us by email – [email protected]. The content will be deleted within 24 hours.
49ersBryant YoungEddie DeBartolopro football hall of fame
0
Share

Why Governor Abiodun must be removed from office

Why the N.B.A. Won’t Schedule Games on Election Day in November

Tell us about a music venue in the UK or elsewhere…

Here’s what the Yankees can do about Aaron Hicks…

Tim Ryan voted for Dem bill that will raise taxes,…

‘Was I vaccinated for polio?’ and…