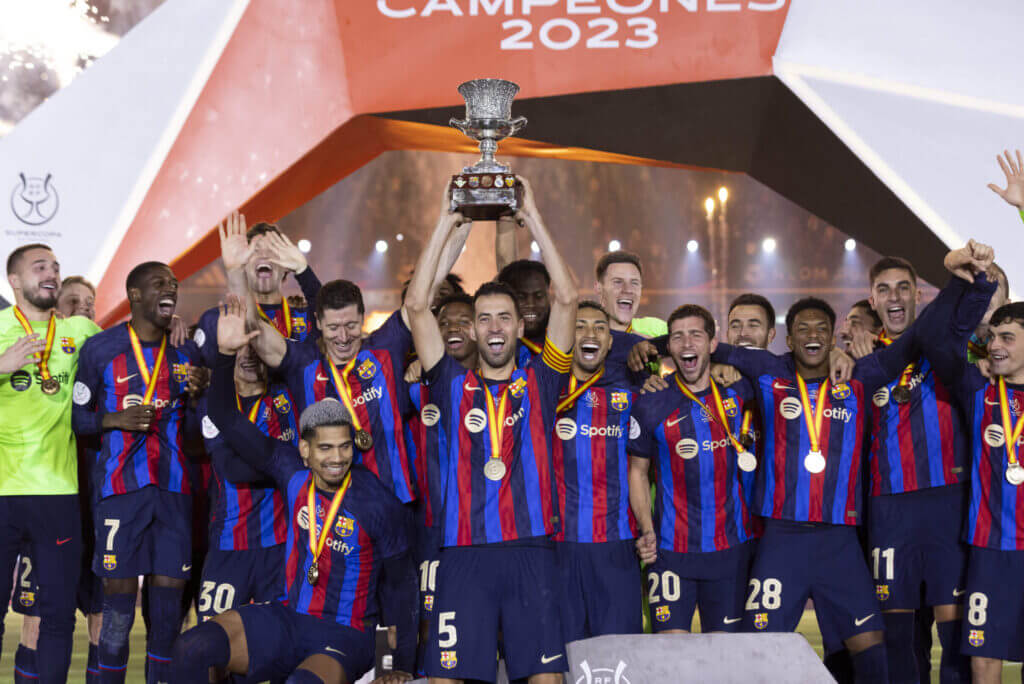 Being a Barcelona fan in the last couple of years has been so demoralising that all anyone could really hope for was one beautiful night.

Xavi Hernandez won his first trophy as the club’s manager in a magnificent win, and signature display, against the Spanish champions, European champions and his club’s fiercest rivals – Real Madrid.

The final score of 3-1 wasn’t even a fair reflection of their dominance, as their young stars – the final’s MVP Gavi (18), and Pedri (20) – shone brightest in Saudi Arabia.

The Spanish Super Cup may not be a major title, and there’s still a lot of work for Barcelona to do this season, but what happened in Riyadh could prove to be as momentous a triumph as some of those historic nights of the past.

“I’m so pleased,” a delighted Xavi said after the match. “You know I care a lot about how we win. Sometimes we win but we are not sharp, or we don’t play as we expect to, and I can’t go home fully happy. The ‘how’ is always our motto, what we plan around. The day before the match we thought about how to create overloads with four midfielders. Gavi could not read it any better. Pedri, Busquets, and Frenkie De Jong were phenomenal too in that regard.”

The last time Xavi’s Barca gave a masterclass of this magnitude was last March, when Real Madrid were once again the opposition. A 4-0 win at the Santiago Bernabeu was an unexpected morale boost for a club that at the time looked closer to calamity than glory.

It set the bar in terms of how Xavi Hernandez demands his team play, but also underlined that becoming a truly elite team requires endless work behind the scenes rather than just one brilliant win.

Senior figures from the club, such as president Joan Laporta or former captain Gerard Pique, were particularly bold after last year’s showcase in Madrid.

Both claimed that Barcelona were ‘back’, but that was soon proven to be premature.

Less than a month later, Barcelona were knocked out of the Europa League quarter finals after a humiliating home loss to Eintracht Frankfurt. They they failed to win four of their last eight La Liga games, three of which coming at Camp Nou against teams like Rayo Vallecano, Getafe and Villarreal.

But in the end, this is the whole point of the process. This Barca side is still so raw that it simply cannot be expected to match the brilliance of past teams. Even more so when you consider two of the key players in these huge matches are barely old enough to buy a bottle of wine at the local supermarket.

Pedri and Gavi are still both young starlets, but ran the show against a Real Madrid side featuring 11 Champions League winners.

Nights such as this one in Riyadh evoke memories of the process all elite teams have followed on the road to greatness – slowly-built foundations, fortified by mistakes and momtns to forget, but ignited by sparks of talent so powerful they can make a whole fanbase believe their club’s future can be so much brighter.

Jürgen Klopp’s first season at Liverpool offers a good example. Even in those early days they provided some European nights for the ages, particularly in two epic remontadas against Borussia Dortmund and Villarreal on their way to the 2016 Europa League final. They also had statement wins at Stamford Bridge and the Etihad Stadium in the Premier League. They may have finished eighth in the league, 21 points off the top, and lost that Europa League final to Sevilla, but the signs of resurgence were clear.

They felt a flawed team, but one with obvious potential. They had won nothing yet, but the flame had been lit.

FC Barcelona could lose their next game in La Liga (they will host Getafe on Sunday). There will be bumps in the road and more uninspiring nights to come. In fact, they would not have even been playing in the Super Cup final had goalkeeper Marc-Andre Ter Stegen not put on something of a masterclass against Real Betis, helping them scrape through on a penalty shoot-out.

“I’m especially thrilled for my players,” said Xavi. “Since I’ve been here they have worked so hard. Sometimes results did not go our way and they received a lot of criticism. It was unfair, if you ask me. But this makes us calmer and more confident for the future”.

Joan Laporta will need to improve an unbalanced squad, and Xavi will need to assure dominance can become a weekly habit. But again, this wasn’t at the front of anyone’s mind last night.

“For all the barcelonismo, this is so positive. We’ve seen it all recently. We’ve been through thick and thin. Financial problems, Leo Messi’s departure was a tough episode. Tonight we won a title that can ignite this generation”, Xavi added.

“We have to keep maturing. There will be tougher moments. Now I think a lot about our fans and the day we lost 3-0 at home to Bayern this season. We were kicked out of Europe and they stayed there, cheering us on. This is for them. We are in a process and there’s still a way to go.”

Barcelona are no longer a team on a downward trajectory.

Denial of responsibility! Yours Bulletin is an automatic aggregator of the all world’s media. In each content, the hyperlink to the primary source is specified. All trademarks belong to their rightful owners, all materials to their authors. If you are the owner of the content and do not want us to publish your materials, please contact us by email – [email protected]. The content will be deleted within 24 hours.
BarcelonaChampions LeagueLa Ligapremier leagueSoccer
0
Share