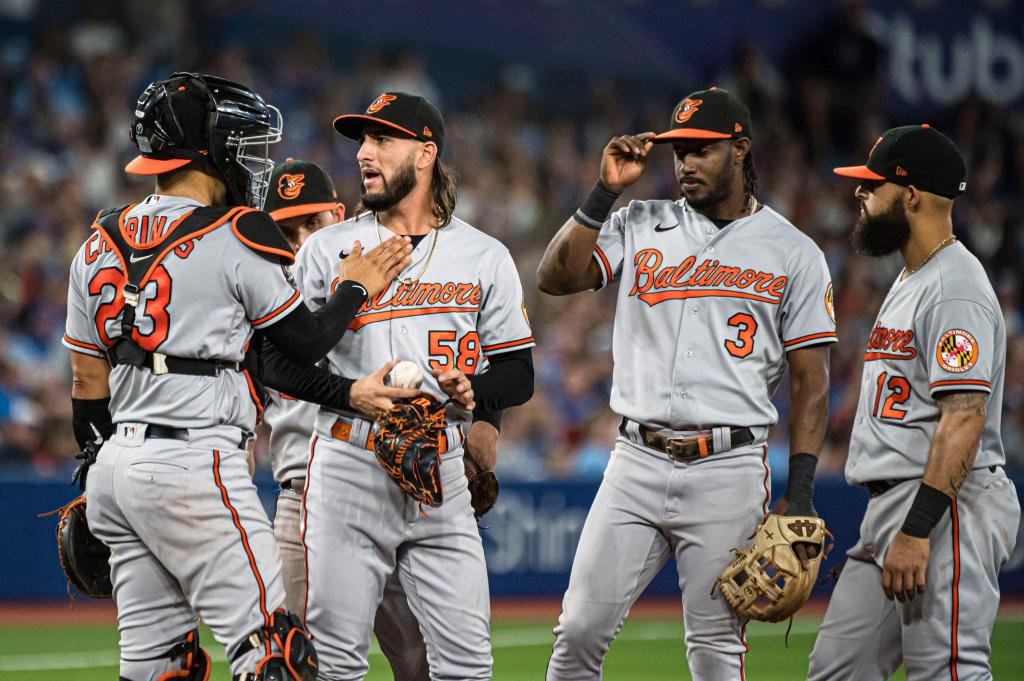 In the just more than two weeks since the deadline deal that sent All-Star closer Jorge López to the Minnesota Twins, the Orioles’ bullpen has largely avoided melting down. The offense, meanwhile, has had its struggles of late, though it’s unclear whether the freshly traded Trey Mancini would have been a solvent.

Both absences were felt in Wednesday afternoon’s 6-1 loss to finish a three-game series against the Toronto Blue Jays. With Mancini playing for the Houston Astros and count-working rookies Adley Rutschman and Terrin Vavra on the bench, Toronto right-hander Ross Stripling efficiently took a perfect game bid into the seventh inning, the second time in four games Baltimore went into the seventh without a base runner.

Half an inning after Cedric Mullins spoiled the effort with a single up the middle, the Blue Jays (62-54) struck for all of their runs. Dillon Tate and Félix Bautista, who served as López’s primary right-handed setup men before he was traded, had both pitched in the first two games of the series, each an Orioles (61-56) victory. With manager Brandon Hyde yet to use a reliever three days in a row, he had Joey Krehbiel replace Austin Voth after the latter’s six shutout innings.

Krehbiel has been effective in Baltimore’s bullpen this year, entering Wednesday with a 2.40 ERA, but he couldn’t get the job done this time.

Krehbiel allowed two of the three batters he faced to reach base, and Cionel Pérez allowed them both to score on a pinch-hit RBI single by George Springer and a two-run double to deep right field by Santiago Espinal. Louis Head later walked in a run with the bases loaded and allowed a two-run double by All-Star catcher Alejandro Kirk to make it 6-0.

Still, it’s notably the first time in the two weeks since trading López that the Orioles were burned by the subsequent change in their bullpen ladder.

More impactful Wednesday was the lack of offense. Stripling, on a limited pitch count in his first start off the injured list, needed only 67 pitches through his six perfect innings. Rutschman, leading the Orioles in most offensive categories in the past couple of months, got his first full day off since late July, while Vavra was out of the lineup because Stripling tends to be more effective against left-handed hitters. The Orioles’ lone run came in the eighth after Vavra delivered a pinch-hit single and eventually came around to score.

The loss cost the Orioles a sweep that would have propelled them into a playoff spot. Instead, they trail Toronto by 1 1/2 games for the American League’s third wild-card spot and fell behind López’s Twins in the process.

In June, Voth came to the Orioles as a waiver claim from the Washington Nationals, having posted a 10.13 ERA with Baltimore’s regional foe.

With his six scoreless innings Wednesday, Voth brought his ERA with the Orioles to 2.81. He allowed two hits and a walk while striking out three. His six innings and 86 pitches were both season highs, prompting Hyde to pull him before the decisive seventh.

>> Vavra continued to get work at first base before Wednesday’s game, working on pickoff situations at the bag with infield coach Tony Mansolino.

This story will be updated.

Denial of responsibility! Yours Bulletin is an automatic aggregator of the all world’s media. In each content, the hyperlink to the primary source is specified. All trademarks belong to their rightful owners, all materials to their authors. If you are the owner of the content and do not want us to publish your materials, please contact us by email – [email protected]yoursbulletin.com. The content will be deleted within 24 hours.
0
Share

4 burglary suspects arrested after chase across 6…