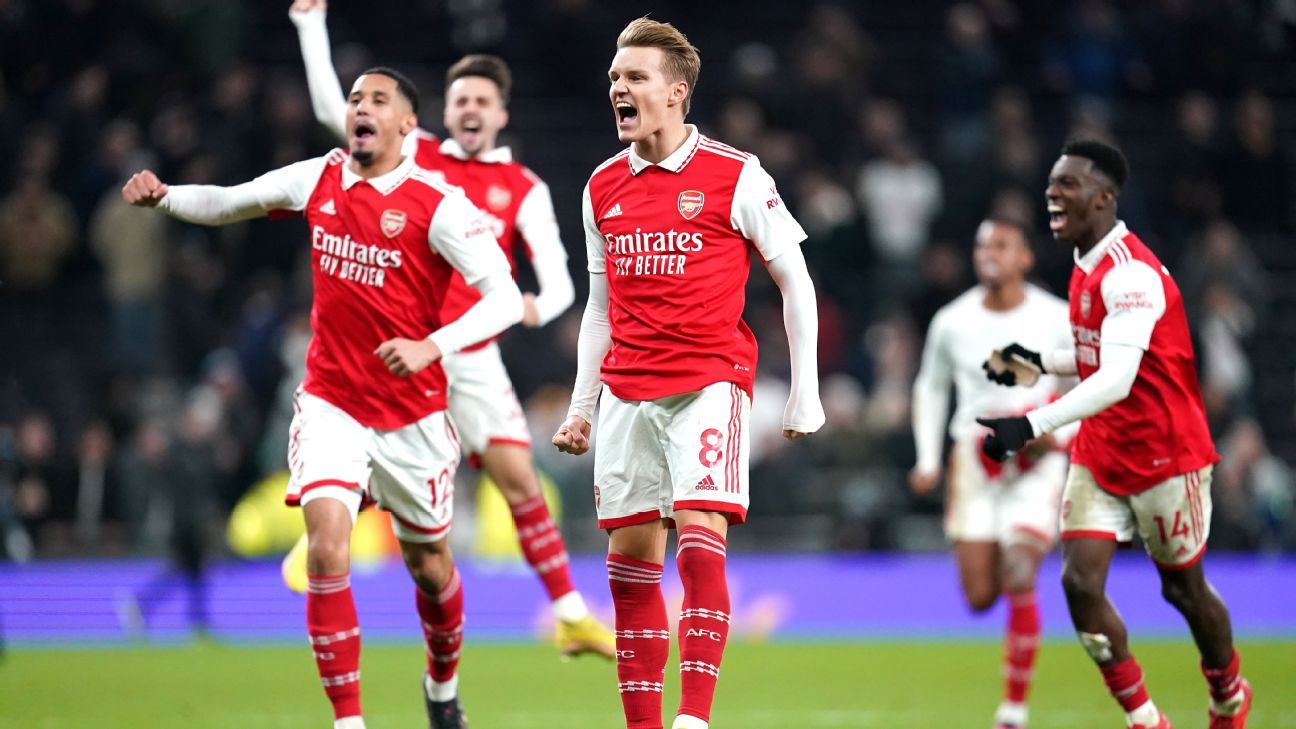 LONDON — Arsenal opened an eight-point gap at the top of the Premier League table by cruising to a 2-0 win against Tottenham Hotspur in the North London derby on Sunday.

A Hugo Lloris own-goal followed by a long-range strike by Martin Odegaard — both in the first half — were enough to claim the points and maintain Arsenal’s bid to win their first title since Arsene Wenger’s Invincibles in 2003-04. Odegaard, goalkeeper Aaron Ramsdale and attacker Bukayo Saka were all outstanding for the Gunners, as Spurs were outclassed by their rivals and are now five points off the pace in the race to finish in the top four.

Arsenal’s Premier League title charge is now indisputable. For the first time this season, the Gunners are listed as favourites to win the league with the bookmakers after their 2-0 win at Tottenham confirmed a crucial shift in momentum in the title race this weekend.

Manchester City’s defeat at Manchester United, coupled with Arsenal’s North London derby victory, gave Mikel Arteta’s team an eight-point lead ahead of Pep Guardiola’s side. That advantage has made them title favourites for the first time at any stage of the season since Wenger’s side beat eventual champions Leicester in February 2016.

Although Arsenal, City and fourth-placed United are one game short of the halfway stage of the season — third-placed Newcastle United hit that mark with their 19th fixture at home to Fulham on Sunday — an eight-point lead seems a substantial one in a campaign in which only the Gunners have shown any kind of consistency.

This clash with their traditional rivals looked to mark the start of a testing period for Arteta’s side, who had lost all of their previous visits to the Tottenham Hotspur Stadium. With the Spurs game followed by United at the Emirates next Sunday and a home game against City on Feb. 15, Arsenal’s title credentials really will be placed under scrutiny, but they breezed through the first challenge by beating Spurs with a scoreline that flattered the home side.

Arteta has built a team that has flair and tenacity in equal measure, and they don’t appear — yet at least — to be troubled by nerves or the pressure of expectancy. Whether Arsenal’s squad is deep enough to last the course remains to be seen, and plenty of teams have failed to sustain a good first half of the season into the second half. But they’re passing every test they face while others are slipping up. Arsenal deserve to be tagged as title favourites.

This was a day of contrasts for the two goalkeepers on duty. Lloris started badly, playing a big part in his team’s defeat, while Ramsdale was a match winner.

Even before Lloris conceded an own-goal on 14 minutes, when he fumbled Saka’s cross into the net, the former France keeper — he announced his retirement from international football after the World Cup — almost gifted a goal to Eddie Nketiah with a poor clearance. The 36-year-old provoked nervousness in his defenders and was then slow to get down in his failed attempt to keep out Odegaard’s 20-yard shot for Arsenal’s second.

Lloris used to be a top goalkeeper, but he has always made too many mistakes to be considered truly world class. Now, the mistakes are becoming too regular, and Spurs need to start looking for a replacement.

Arsenal have no such worries with Ramsdale, though. The England keeper can be eccentric and unpredictable at times, but he has great athleticism and presence, and his first-half saves from Son Heung-Min and Harry Kane came at crucial moments. He then denied Kane again and Ryan Sessegnon early in the second half as Spurs fought to get back into the game, so his contribution was vital.

All title-winning teams need a reliable goalkeeper. Arsenal are in the hunt because they have one; Spurs are outside the top four because they don’t.

Tottenham are now in an increasingly desperate battle to secure Champions League qualification following this defeat. Antonio Conte’s team are five points behind fourth-placed Man United, having played one game more than Erik ten Hag’s side, and their margin for error is quickly running thin.

The reality, though, is that Tottenham’s league aspirations are likely to be defined by their next three games, in which they face Manchester City home and away on either side of a difficult trip to sixth-placed Fulham on Jan. 23.

Last season, Spurs came back from a similarly bleak position at this stage of the season to finish in the top four, but that was because they benefited from the bounce of appointing Conte as coach midway through the campaign. There is little sign of another bounce this term, but Spurs will need to find something pretty quickly because those next three league games could see them come away with zero points if they perform as poorly as they did against the Gunners.

They lacked ideas and organisation, and confidence seems to be in short supply, but Spurs have now reached the decisive stage of their season. The worry will be that they fall short just when they need to raise their game.

BEST: Bukayo Saka, Arsenal. Seemed to have the right-hand side of the pitch to himself as he tormented Spurs constantly with his pace, trickery and delivery.

BEST: Pape Matar Sarr, Tottenham. A tough gig for every Spurs midfielder as Arsenal dominated, but Sarr can hold his head high after putting in a solid performance.

BEST: Aaron Ramsdale, Arsenal. The Arsenal goalkeeper made four crucial saves. Even though his team dominated, Ramsdale’s contribution was huge.

WORST: Hugo Lloris, Tottenham. Lucky to get away with one big mistake before he fumbled Saka’s cross into the net. Fading fast as a top-class keeper.

WORST: Cristian Romero, Tottenham. Booked in the first half and proceeded to be a liability in the second. Too reckless.

This was not Lloris’ proudest moment.

SAKA SCORED FROM THIS ANGLE 😵😵 pic.twitter.com/wvqXM2J7Vc

After the match: What the players/managers said

Odegaard on Arsenal’s eight-point lead over Man City: “We are in a good position, there is no doubt about that. We’ve got to stay humble and keep working hard. You saw the difference in the first and second half today, so we have things to improve. We have to keep going.”

Ramsdale on an incident with a fan after full-time: “The Spurs fans gave me some throughout the game, I was giving some back. The people I did give it to greeted it in sportsmanlike terms, but one fan tried to give me a little punch on the back. It is a shame as it is just a game of football at the end of the day. Both sets of players tried to bring me away but thankfully nothing too drastic happened. It is a sour taste but I’m sure we will enjoy it when we go back into the dressing room.”

Dan Thomas is joined by Craig Burley, Shaka Hislop and others to bring you the latest highlights and debate the biggest storylines. Stream on ESPN+ (U.S. only).

– Lloris’ own-goal was the first in his 440-game Tottenham career.

– Arsenal’s 2-0 victory at Tottenham is the largest margin of victory for a road team in a Premier League edition of the north London derby since September 2007, when the Gunners won 3-1 at White Hart Lane.

Tottenham: As if the derby wasn’t enough, Spurs will have to travel to Manchester City on four days’ rest to take on the reigning Premier League champions on Thursday.

Arsenal: The Gunners will next be in action a week from Sunday, when they welcome Manchester United to north London.