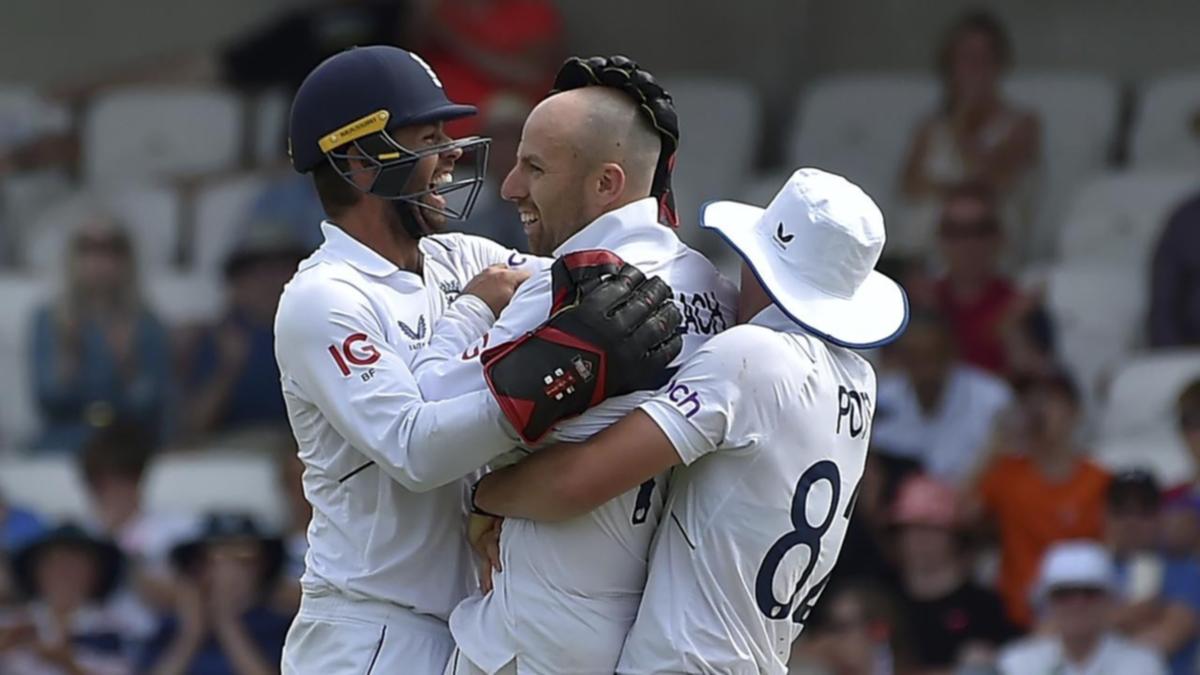 Henry Nicholls has been dismissed in the most bizarre fashion off the final ball before tea to leave New Zealand struggling on 5-123 against England on day one of the third and final Test at Headingley.

A straight drive by Nicholls in Thursday’s post-lunch session struck the outstretched bat of partner Daryl Mitchell, who was looking to take evasive action at the non-striker’s end, and deflected towards mid-off where Alex Lees took a simple catch.

Spinner Jack Leach celebrated taking his second wicket of the day with a look of bewilderment on his face as Nicholls trudged off, out for 19 off 99 balls.

Mitchell was 25 not out and will be joined in the middle by Tom Blundell after tea.

The other wicket to fall after lunch, from which the New Zealanders resumed on 3-65, was that of Devon Conway, who played on to the stumps for 26 to give Jamie Overton a first Test wicket on debut.

Nicholls had been given a life on 10 after being trapped in front of his stumps off a delivery from Matthew Potts.

Not out was the on-field call by the umpire and England captain Ben Stokes chose to not review, only for replays to show the ball would have hit middle and leg.

Mitchell has already hit two centuries and a fifty in this series and was looking to be a scourge for England again. His highlight was a six down the ground off Leach.

Trailing 2-0 in the three-match series, New Zealand won the toss and opted to bat under a blue sky in a bid for a consolation victory but they lost Tom Latham for a duck on the sixth ball of the match, with Joe Root taking a catch at slip off the impressive Stuart Broad.

Denial of responsibility! Yours Bulletin is an automatic aggregator of the all world’s media. In each content, the hyperlink to the primary source is specified. All trademarks belong to their rightful owners, all materials to their authors. If you are the owner of the content and do not want us to publish your materials, please contact us by email – [email protected]. The content will be deleted within 24 hours.
cricketsport
0
Share

How to explore ancient Egypt by river and road – Daily News

South Africans could pay more than R26 per litre…

Aussie uni student can only watch as scammers…