Braves’ rotation is deep, and Spencer Strider can make it next-level formidable 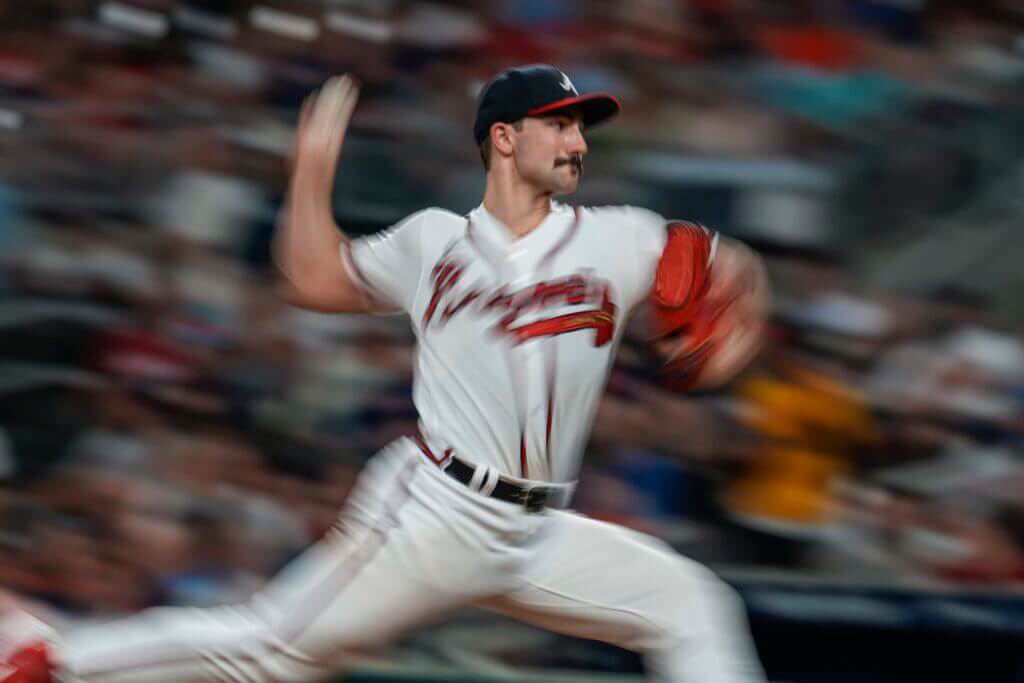 His listed height of 6 feet seems generous, even in cleats. And to listen to Spencer Strider speak — low volume, thoughtful, philosophical, technical — or look at him from the waist up offers no inkling of what he becomes when he steps on a pitcher’s mound.

Utterly dominant. Supremely confident. Punishing power, with some panache — that little spin on his landing foot while kicking his right leg upward and across his body on a pitch he seems to know is a strike that won’t be hit.

The Braves have a pitching pedigree of the highest order, more Cy Young Awards and Hall of Famers than most franchises could dream of producing. But they’ve never had anything quite like Strider, an intellectual vegan with massive thighs and overwhelming fastballs that in 2022 carried him to 200 strikeouts faster than any pitcher in major-league history.

Did we mention he did that as a rookie?

His record-shattering performance pushed the parameters of power pitching and forced everyone to reset expectations for the right-hander, a fourth-round pick out of Clemson in the 2020 draft.

Strider became a household name and one of the more recognizable Braves, with a distinctive mustache he’s featured since his man-against-boys 2021 season in the minor leagues. He and his wife — they got married after the season — and their two dogs make their offseason home in Knoxville, Tennessee.

“We’re right there in Braves Country,” said Strider, who grew a beard early in the winter to try to go unnoticed. “It didn’t work,” he said, smiling before adding, “It’s cool to see fans. And it just reminds you that you play in one of the best organizations in the game. And the fans are everywhere.”

As he prepares for his second season, Strider is the component most capable of making the Braves’ preseason rank among MLB rotations seem conservative. Pundits have their starters rated somewhere between fifth and seventh, but this could be an elite unit with at least two Cy Young Award contenders, Strider being one if he pitches for a full season anything like he did after joining the rotation two months into his rookie season.

“I think that can be the strength of the team,” Strider said of the rotation. “We’re pretty well stacked everywhere, but I think we consider ourselves kind of, not the backbone necessarily, but the game can be won and lost on the mound, for sure. And we all take pride in the fact that we can give us a chance to win.”

He was the first in MLB history to have at least 200 strikeouts with fewer than 100 hits allowed and notched his 200th K in exactly 130 innings — two outs faster than Hall of Famer Randy Johnson’s previous mark in 2001. Strider was the NL Rookie of the Year runner-up to Braves teammate Michael Harris II.

“We’ve got a lot of talent,” said Wright, who was 21-5 with a 3.19 ERA in his first full season. He’s a former first-rounder who put it all together after wildly inconsistent spurts with the Braves during parts of the previous four seasons. “Obviously it starts with Max; Max has been incredible. He’s just kind of our leader, makes us go. And then Strider might have 400 strikeouts this year, starting from the very beginning. I’m excited to see him have a full year, starting from the very jump.”

Significant contributions from their fifth starter — whether that’s Mike Soroka coming off two-plus years of rehab for a twice-torn Achilles, Ian Anderson coming back from a demotion to Triple A, Bryce Elder coming off an impressive rookie season, or a combo of all three — could make Atlanta’s rotation the deepest in the majors.

But it’s Strider, with his spectacular ability to miss bats and force weak contact, that could make the rotation next-level formidable.

Strider began the 2022 season in the bullpen and didn’t move into the rotation until May 30. The Braves were 23-25 and had a 4.38 starters’ ERA before he went to the rotation, a move made after multiple pitchers struggled in the fifth spot. After Strider’s transition, the Braves went 78-36 and their starters posted a 3.46 ERA.

Obviously, the turnaround wasn’t all Strider’s doing. It also coincided with Harris being brought up directly from Double A and thrust into the lineup in center field. The rotation’s improvement also reflected Morton overcoming a slow start after a winter spent rehabbing a broken leg.

But there was no disputing the impact of Strider, whose starts became must-see TV. His performances energized the Braves and left countless opposing hitters shaking heads and muttering as they trudged back to the dugout. They were unable to catch up to his 98-101 mph fastballs, made to look foolish by his devastating slider or fooled by his changeup.

Strider added the changeup to his repertoire last year because he knew it would be hard to thrive long-term as a starter with only two pitches, even if there were plenty of games where he did just that — and even some in which he barely used the slider.

His fastball is that good. It’s different than what hitters are used to seeing because Strider is four or five inches shorter than most triple-digit fastball pitchers, and his release point is accentuated by the fact that he uses his huge legs for stability to get more extension than most pitchers. The result is that he’s releasing the ball several inches closer to the plate, like a much taller and longer-armed pitcher.

The whole effect is a fastball that appears to be rising from the hitter’s perspective. It helped him strike out batters at a dizzying rate — 13.8 per nine innings, more than a full strikeout above the previous best rate by any rookie in 12 or more starts, Kerry Wood’s 12.6 with the Cubs.

There were plenty of games when Strider’s fastball was nearly unhittable. On July 7 against the Phillies, he became the first Braves pitcher since at least 1961 to record nine strikeouts in the first three innings of a game. On Sept. 1 versus Colorado, he set an Atlanta-era franchise record with 16 strikeouts while allowing two hits in eight innings.

That broke the Atlanta record of 15 strikeouts, done twice by Hall of Famer John Smoltz. Strider was only the fourth MLB rookie with as many as 16 strikeouts in a game. (Dwight Gooden did it twice.)

In four regular-season games against the Phillies, including three starts, Strider was 4-0 with a 1.27 ERA and had 34 strikeouts in 21 1/3 innings while allowing a .097 average (7-for-72). That only made it harder to swallow the results of his final outing of the year, in Game 3 of the NL Division Series at Philadelphia.

Strider had ended the regular season on the injured list with a strained left oblique, which he sustained in a Sept. 18 game against the Phillies — the outing in which he surpassed Johnson’s fastest-to-200 strikeout mark.

Strider had not pitched in 26 days when he faced the Phillies in the division series, which was tied 1-1. Despite the long layoff, he continued his mastery of the Phillies early, averaging 98.4 mph with his fastball in the first two innings including a 100.6-mph clocking on his fourth pitch.

But after striking out two in the first inning and cruising through two innings with his usual velo, Strider tired in the third, when he issued a four-pitch walk to Brandon Marsh to start the inning and threw some uncharacteristically low 95-96 mph fastballs.

Strider’s one-out error on a pickoff throw moved Marsh to third, and Bryson Stott doubled on a nine-pitch at-bat to drive in the first of five runs charged to Strider in 2 1/3 innings. An intentional walk to Kyle Schwarber was followed by a first-pitch homer from Rhys Hoskins on a 93.8 mph fastball that was the slowest of Strider’s career.

He insisted afterward that the layoff wasn’t the cause of his rough outing, but players in both clubhouses knew otherwise. The Phillies, the NL East’s third-place team, seized the opportunity to take a 2-1 lead in a series they would finish a day later, then beat San Diego in the NLCS before losing to Houston in the World Series.

Anyone who knows him will tell you Strider is never lacking for motivation. He’s borderline compulsive with his workouts and fitness, and has studied every iota of his pitching mechanics in an effort to become as close to a perfect baseball-delivering machine as possible.

He used downtime during rehab following Tommy John surgery in 2019 to his advantage, seeking knowledge on eating, training and pitching at optimum levels. Now, he’s there. But if there was any way to amp up his inner drive even more, that ending to the postseason perhaps did it. That was apparent when he was asked Saturday at Braves Fest about having time during the winter to reflect on his stellar rookie season.

“I kind of enjoy those things in the moment,” he said. “My goal is to go out every five days and give us a chance to win. If that happens, I enjoy it that day. Then you kind of have to just start over between every start. And the way the (postseason) ended, it made it easier to just kind of lock into 2023 and go ahead and get ready. I had the wedding early; that was sort of my vacation from baseball. But I wanted to get work in since I’d just had the injury and I knew I was healthy (now). I wanted to sort of build off that.”

He said of the oblique injury and NLDS, “In a weird way, I’m glad that it worked out that way. Because I don’t want to go to the offseason going, ‘I had a good year; I’m pretty good.’ Then it’ll happen again. The game is going to adjust to you, and the biggest teacher is failure. You don’t really know what you need to improve upon until something goes wrong, so that area is highlighted in some way.

“Obviously an oblique injury is something that everybody in baseball is susceptible to. Mine was not super severe. The training staff did a great job getting me back. And I thought that I was effective for a little bit there in the DS. Unfortunately, we didn’t pull it out. But I think the group we have now is capable of going all the way.”

Denial of responsibility! Yours Bulletin is an automatic aggregator of the all world’s media. In each content, the hyperlink to the primary source is specified. All trademarks belong to their rightful owners, all materials to their authors. If you are the owner of the content and do not want us to publish your materials, please contact us by email – [email protected]. The content will be deleted within 24 hours.
atlanta braves
0
Share