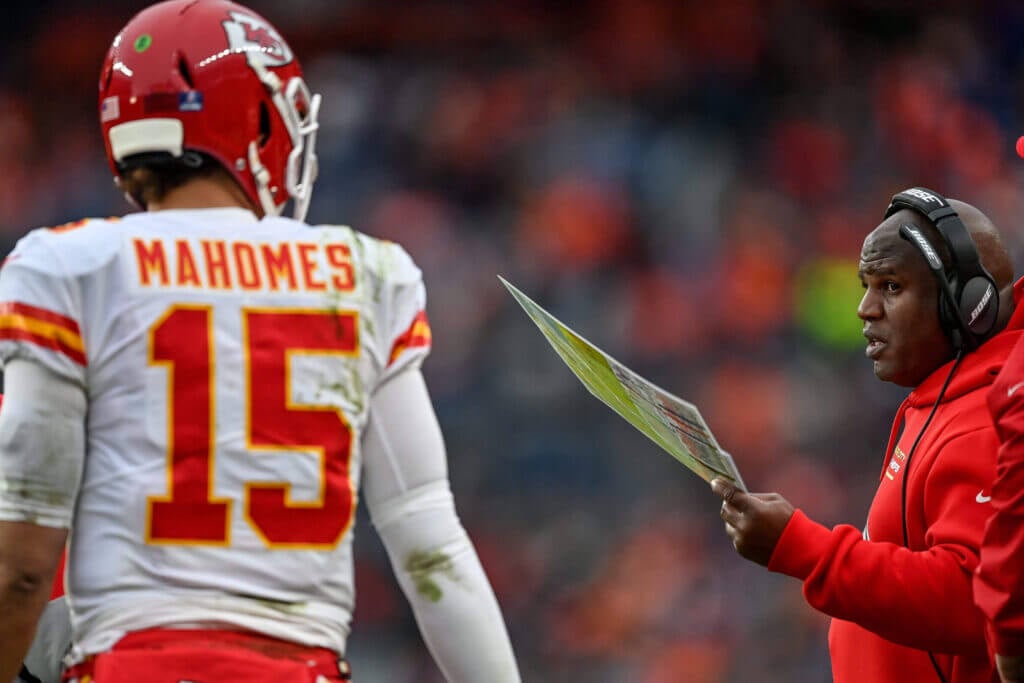 KANSAS CITY, Mo. — He went through his usual warmup routine. He chatted with superstar tight end Travis Kelce, one of his favorite teammates. At times, he smiled. Then, as part of his stretching session alongside his teammates, he put most of his weight (225 pounds) on his right ankle.

The first positive sign for the Chiefs during their practice Wednesday — in a week they hope to observe several such moments — was what superstar quarterback Patrick Mahomes did next: He smoothly jogged across the team’s indoor practice field without a limp, something he couldn’t do just four days ago.

Mahomes was eager to test himself in Wednesday’s practice, his pain tolerance and his right high ankle sprain, which he sustained Saturday in the Chiefs’ divisional round playoff victory over the Jacksonville Jaguars. He was a full participant, meaning he took every repetition with the first-team offense. That was the first step in his plan to lead the Chiefs in Sunday’s AFC Championship Game against the Cincinnati Bengals at Arrowhead Stadium.

“It’s feeling good so far,” Mahomes said before the team’s practice. “I felt better than I thought I was going to be after the game. Moving on it during the game definitely hurt. The next morning it felt a little bit better, and I’ve continued to get better throughout the week.”

Analyze away twitter! Patrick Mahomes is practicing today. We got to see him stretch. Full zoom on the iPhone pic.twitter.com/4AU2O2g5OG

Mahomes acknowledged that, in his estimation, he has spent more time at the Chiefs’ training facility since Sunday to receive treatment on his ankle than at his home.

The other half of Mahomes’ job before Sunday’s game is discussing and modifying the Chiefs’ offensive game plan with coach Andy Reid, offensive coordinator Eric Bieniemy and quarterbacks coach Matt Nagy. One major reason Mahomes is arguably the league’s most talented passer is because of his mobility and creative improvisation when scrambling out of the pocket. Such a rare combination of skills translated to just 11.4 percent of Mahomes’ pressured dropbacks this season resulting in a sack, the lowest pressure-to-sack rate among 34 qualified quarterbacks, according to TruMedia.

This week, the Chiefs will try to find the appropriate balance in their game plan between protecting Mahomes and allowing the unit to be aggressive against the Bengals’ brawny defense.

“We’re all searching for that little extra thing that you can throw at them,” Reid said.

Although reporters weren’t allowed to see Mahomes go through his usual footwork after receiving the snap from center Creed Humphrey on Wednesday — or dropping back before passing the ball — Reid explained that the Chiefs will have around 300 offensive plays at their disposal Sunday to help Mahomes be as effective as he can be from within the pocket.

“I think we have enough in the game plan where you can kind of pick and choose where you want to go with it according to how the players are feeling while they’re playing,” said Reid, who is in his 24th season as a head coach. “Maybe experience helps, but you have a variety of things that you can go to if you have to go a certain direction with the calls.”

The Bengals allowed the most targets (71), completions (47) & receiving yards (495) to tight ends aligned in the slot this season.#CINvsKC | #ChiefsKingdom pic.twitter.com/SgqXqC9QYP

Mahomes shared that the pain and limitations in his right ankle feel similar to what he experienced in 2019, when he sustained a left high ankle sprain in the Chiefs’ season-opening win over the Jaguars. In the week that followed, Mahomes was a full participant in the Chiefs’ three practices, then led the team to a blowout victory over the then-Oakland Raiders by throwing four touchdown passes, all of them in the second quarter.

Before that game, Mahomes said he had to figure out the best way for his left foot to land on the turf after his throwing motion to maintain his accuracy.

The Raiders’ defense in 2019 is not the same challenge as the Bengals’ defense, a unit that has prevented the Chiefs from scoring a touchdown in the fourth quarter of the previous three meetings between the new rivals, all Cincinnati wins.

If Mahomes doesn’t escape the pocket against the Bengals as much as he often does, his usually strong pocket awareness likely will need to be exceptional, creating enough time for him to complete short and intermediate passes. One of the Chiefs’ best personnel groups this season has been when they have one running back and two tight ends on the field. With that “12” personnel, as it’s called, mMahomes has completed 70.5 percent of his passes this season for 1,390 yards, with 11 touchdowns and just two interceptions, according to TruMedia. His average time to throw has been 2.8 seconds and he has been sacked just five times while facing a blitz on 24.3 percent of his dropbacks.

Last month, the Chiefs ran just 12 plays with 12 personnel against the Bengals. One of those plays led to Mahomes’ lone touchdown pass in the game, a 2-yard connection to running back Jerick McKinnon.

Got a game in Cincy.

Mahomes’ best options for short and intermediate passes are Kelce, McKinnon and receiver JuJu Smith-Schuster. Kelce led the Chiefs in last week’s victory with 14 receptions for 98 yards and two touchdowns. As a nine-year veteran, McKinnon led all NFL running backs in the regular season with nine touchdown receptions, tied for the most in a single season in the Super Bowl era. When opponents have used two defenders to cover Kelce, Smith-Schuster has been Mahomes’ best secondary target. Smith-Schuster made a pivotal 16-yard reception in the fourth quarter against the Jaguars on Saturday on a back-shoulder throw.

“There’s nothing that’s going to stop Pat from doing what he does,” Smith-Schuster said. “I’m super-excited. That kid is a dawg. He doesn’t give up. That just shows how much heart he has for this team and how much love he has for everyone.”

Mahomes knows the Bengals’ defense could counter Sunday with several different tactics, such as more blitzes, an increase of dropping eight defenders into coverage or having the secondary switch from man-to-man coverage to zone coverage throughout the game, perhaps down to down.

“You have to be preparing for everything. I’m expecting them to have a mixture.”

Rookie running back Isiah Pacheco understands that his most important task against the Bengals is protecting Mahomes against a blitzing linebacker or safety.

But Reid and Bieniemy could give the ball more to Pacheco in Sunday’s game than they did against the Bengals a month ago to ease some of the burden on Mahomes. In the first meeting, Pacheco had 16 touches for 82 all-purpose yards. His best snap occurred in the red zone, when he bounced off three defenders to score an 8-yard touchdown on a third-and-4 play.

Last week, Pacheco had one of the best performances of his young career. He gained 101 all-purpose yards on 13 touches against the Jaguars, including a season-high 39-yard rush with Chad Henne at quarterback. When the Chiefs used 12 personnel in the regular season, Pacheco averaged 5.46 yards per rushing attempt, according to TruMedia.

“I’ve been waiting on this moment my whole life,” Pacheco said. “It doesn’t matter what (plays) we call. We’re ready to go out there and execute.”

Another section of the playbook that could be effective for the Chiefs is their screen passes to running backs and tight ends.

The Chiefs are also known for having a plethora of misdirection plays meant to confuse opponents and get the ball to their skill-position players in space on the perimeter. In the first meeting against the Bengals, the Chiefs ran only one jet sweep, one of their favorite plays. with rookie receiver Skyy Moore netting a 12-yard gain. Two players who excel at jet sweeps and end-arounds are receivers Kadarius Toney and Mecole Hardman. Due to injuries, neither player was available to the Chiefs in their Week 13 meeting against the Bengals, but Sunday’s game could be the first time Toney and Hardman are on the field together since early November. Hardman, who hasn’t played since Week 9 because of an abdominal injury, was the lone player on the active roster who was a limited participant in Wednesday’s practice.

“He feels better than he did the last couple of weeks, so that move (to rest him looks) like it worked to this point,” Reid said of Hardman. “We’ll just see how he does every day. He seems to be in a good place.”

In the red zone, the Chiefs could try to surprise and confuse the Bengals by resorting to a trick play. The Chiefs ran the play “Arctic Circle” in their regular-season finale against the Raiders, a play that began with the players transforming their huddle into a counter-clockwise carousel then quickly lining up in an unusual formation that featured Mahomes, Kelce, McKinnon and Toney all in the backfield. The play called for Mahomes to get the ball then throw it across the field to Toney, who was behind the line of scrimmage with multiple offensive linemen in front of him for a blocking advantage on the perimeter.

ICMYI … Andy Reid and the @Chiefs are just having fun 😄

Earlier this week, Reid and Bieniemy shared their initial game plan with Mahomes and the rest of the offense. When Smith-Schuster was asked to share his first reaction to all the plays the Chiefs could run against the Bengals, he flashed a big grin and paused for four seconds before responding.

Since Fortson and Edwards-Helaire are not on the active roster, their level of participation wasn’t included in the team’s injury report.

“There’s a chance (with) either one, but maybe more Fortson who can play,” Reid said. “We’ll see how it goes.”

Denial of responsibility! Yours Bulletin is an automatic aggregator of the all world’s media. In each content, the hyperlink to the primary source is specified. All trademarks belong to their rightful owners, all materials to their authors. If you are the owner of the content and do not want us to publish your materials, please contact us by email – [email protected]. The content will be deleted within 24 hours.
Kansas City Chiefs
0
Share