Chiefs to face Rams for first time since epic 2018 game 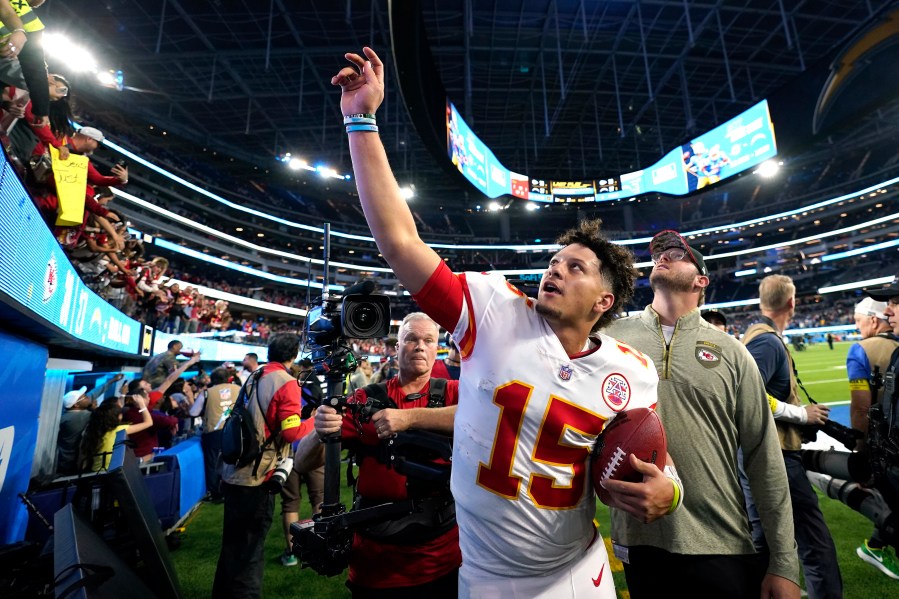 KANSAS CITY, Mo. (AP) — The Los Angeles Rams and Kansas City Chiefs were oh-so close to playing in the Super Bowl in February.

On Sunday, they’ll get to face each other under far different circumstances at Arrowhead Stadium.

The Rams are off to a 3-7 start, the worst in NFL history by a defending Super Bowl champ, and things only appear to be getting worse. Matthew Stafford is in the concussion protocol, which means unheralded Bryce Perkins will get his first start at quarterback, and his supporting cast will be without injured wide receiver Cooper Kupp and the Rams’ leading rusher, Darrell Henderson Jr., who was released this week.

“There’s a lot of different things that we’ve worked through as it relates to the injuries, the moving parts, and some of those types of things. And so you just have to be able to say, ‘Alright, who’s up next? What does that look like?'”

Up next for the Rams? One of the hottest teams in the league.

The Chiefs have followed up their brutal AFC title game letdown against the Bengals by romping to an 8-2 start, led by a young and hungry defense and an offense that may be even better without Tyreek Hill on the roster.

Kansas City has the league’s top offense, pass offense and scoring offense through the first 11 weeks, and coach Andy Reid’s group tends to get even better this time of year. The Chiefs have won 24 straight in November and December.

“We have good players, good locker room. Coach that are willing to work. I mean, a combination that does well, but it’s everybody,” Reid offered by way of explanation. “It’s not one thing we’re doing.”

Since the Bengals played spoiler in a Rams-Chiefs showdown in the Super Bowl, the franchises haven’t faced each other since 2018, when they played one of the epic regular-season games in NFL history. Jared Goff threw a 40-yard TD pass to Gerald Everett with 1:49 left to give the Rams a 54-51 victory that day.

Most of the faces have changed, though some remain the same. Aaron Donald will still be trying to chase down Patrick Mahomes, who in turn will be trying to get the ball out to Travis Kelce as quickly as possible.

“They still have a ton of talent. They’re still a great defense,” Mahomes said. “(Donald) strip-sacked me twice when we played them; we have to account for him every time we’re on the field. (Jalen) Ramsey is a great player. They have great players throughout that defense.”

The offense has been another matter this season.

“Without a doubt,” McVay said, “you try to remain positive within the framework of the things you can control and shift your energy and focus toward those things. That will continue to remain consistent for me and for our coaches.”

The Chiefs have won after trailing at halftime four times this season, and they improved to 9-6 with Mahomes when they trail after three quarters with their come-from-behind 30-27 win over the Chargers last week. No other quarterback with at least 15 tries has a winning record when behind entering the fourth quarter.

“Hopefully we can try to get some leads going into halftime and make it easy on us,” Mahomes said. “That would help.”

The Chiefs hope JuJu Smith-Schuster will play Sunday after spending last week in the concussion protocol. Mecole Hardman is on his second week on injured reserve with an abdominal issue and fellow wide receiver Kadarius Toney missed practice this week with a hamstring injury.

One of the rare bright spots for the Rams has been Tutu Atwell, who didn’t have a catch as a rookie after they chose him in the second round of the 2021 draft. Atwell finally showed his game-breaking speed and ability last week against the Saints, hauling in a 62-yard pass from Stafford for his first career touchdown.

The Rams’ decision to waive Henderson, one of their key players last season, means Cam Akers and rookie Kyren Williams will get the bulk of the work Sunday. Akers requested a trade after getting little playing time earlier this season.

There aren’t many players left that played in that 54-51 thriller in 2018, but one of them is Kelce, who caught 10 passes for 127 yards and a touchdown that day. His play hasn’t diminished over the past four years, either. Kelce had six catches for 115 yards and three touchdowns against the Chargers.

“I love the energy that he brings, and I love the positive impact that he has with our team on the sidelines,” Chiefs offensive coordinator Eric Bieniemy said, “so it’s been fun to watch.”

Apple rolls out Self Service Repair in UK and…

Brendan Fraser’s ‘Brain Was Misfiring’ During…