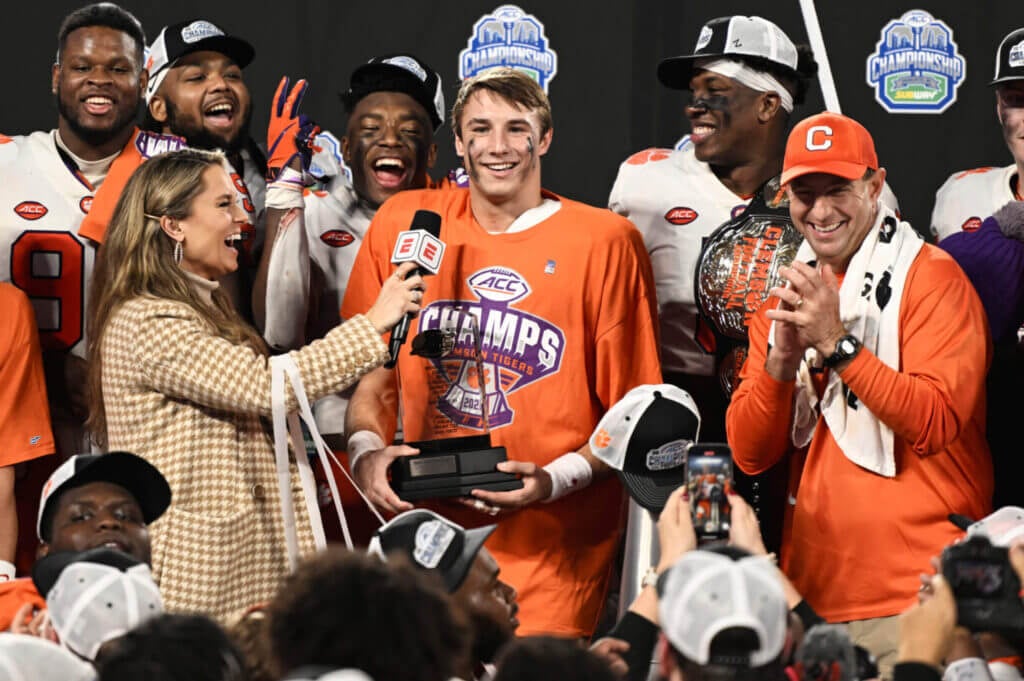 What started as a prime time showcase for North Carolina quarterback Drake Maye turned into a coming-out party for Clemson freshman quarterback Cade Klubnik and a gang of other young players as the Tigers secured their eighth ACC championship since 2011, defeating the Tar Heels 39-10.

Klubnik, the five-star Texas native, came into the game with 5:58 remaining in the first quarter, down 7-0 after the Tigers’ first two drives had amassed seven yards and starting quarterback DJ Uiagalelei had completed two of five passes for just 10 yards. Nine plays and 71 yards later, Clemson had tied it, with Klubnik completing all five of his passes for 50 yards and a 1-yard touchdown to senior tight end Davis Allen.

“I came in with a different mindset today,” Klubnik said of the success he found early in the game. “I don’t know exactly what it was, I was pretty pumped. I just came in ready to play free and trust in God’s timing for everything.”

Klubnik can hurt defenses with his legs, but he also showed off his massive arm Saturday, throwing a few deep balls that were perfectly placed. According to head coach Dabo Swinney, Klubnik was going to come in on the Tigers’ third series regardless of the game situation. He informed Klubnik of the decision last Sunday.

“You saw what Cade could do tonight, man, he’s worked his butt off to get ready,” Swinney said, while also confirming that Klubnik would be the starter going forward. “Thought he might take it in the Notre Dame game, it didn’t work out, but he kept grinding, kept preparing and tonight he took it.”

On the second play of the ensuing drive, Maye fumbled an exchange with his running back, and Clemson junior defensive tackle Ruke Orhorhoro recovered the ball at the North Carolina 23-yard line. A 19-yard gain on a trick-play pass from sophomore running back Phil Mafah back to Klubnik, followed by a 4-yard rush up the middle, and the Tigers took a 14-7 lead and never looked back.

The remainder of the game was bend-but-don’t-break for the Clemson defense, as the Tar Heels drove the ball up and down the field but were unable to get into the end zone. The Tigers gave up a lot of underneath plays, waiting for Maye to get anxious and make a mistake. When he did, they pounced. The only additional points the Clemson defense surrendered were thanks to a late second-quarter field goal by UNC sophomore kicker Noah Burnette.

Brian Bresee and Myles Murphy, who many believe will be first-round picks in next spring’s draft, played well in what could very well be their last game for the Tigers. In today’s college football climate, players who declare for the NFL Draft don’t participate in bowl games unless they have a chance to win a national championship. The two junior defensive linemen’s performances were overshadowed by a couple of sophomores playing at the second and third level. Middle linebacker Jeremiah Trotter Jr. was a tornado laying waste to everything in his path. He chased every ball carrier around the field and finished the game with nine tackles, including three sacks of Maye.

Cornerback Nate Wiggins was responsible for ending two North Carolina scoring drives. With the Tar Heels in the red zone, Wiggins broke up Maye’s pass to Antoine Green, then came flying in to block a field goal attempt on fourth down, spoiling a 16-play UNC drive. His second big play came after North Carolina had taken a nine-play drive down to the 5-yard line. Maye had a quick pass option to the tight end but turned it down and began scrambling, eventually coming back to the tight end but misfiring on the pass. The throw hit Wiggins in the chest on the 2-yard line, and he took it up the sideline for 82 yards and a game-breaking touchdown.

“He’s missed about three of those pick sixes earlier in the year,” Swinney said of Wiggins. “We got pressure on Drake and made him hold on to the ball more than he wanted to.”

The offense was humming once Klubnik took the controls. Five of the six series led by the true freshman ended with a score. In addition to Klubnik and sophomore running back Will Shipley, who scored the final touchdown of the game late in the third quarter, Swinney could not help but gush over freshman receiver Cole Turner, who has not played until recently to preserve his redshirt. Turner finished the game as the Tigers’ leading receiver with three catches for 101 yards, highlighted by a 61-yard bomb that he hauled in and struggled to maintain his balance while stumbling all the way to the goal line, where the official said he was down just before stretching into the end zone.

There was young talent on display all over the field. The offensive line only has one senior. Freshman receiver Antonio Williams was a factor today with three receptions for 40 yards. Freshman cornerback Jeadyn Lukus also picked off Maye. Sophomore linebacker Barrett Carter finished the game with nine tackles as well as a half sack; freshman linebacker Wade Woodaz collected six tackles and a pass breakup.

“I love our young guys,” Swinney said. “Beaux (Collins) had a great year and obviously he’s missed some games with injury, but Beaux and Antonio and Adam (Randall) and Cole, I think we got a really good nucleus of guys we can build around there. Obviously we got great backs and good young tight ends in Brady and Sage.”

“Collectively as a group, they saw tonight what they are capable of doing in the future as they move forward.”

Denial of responsibility! Yours Bulletin is an automatic aggregator of the all world’s media. In each content, the hyperlink to the primary source is specified. All trademarks belong to their rightful owners, all materials to their authors. If you are the owner of the content and do not want us to publish your materials, please contact us by email – [email protected]. The content will be deleted within 24 hours.
Clemson Tigers
0
Share

Crackdown on ‘dangerous’ toys ahead of Christmas rush