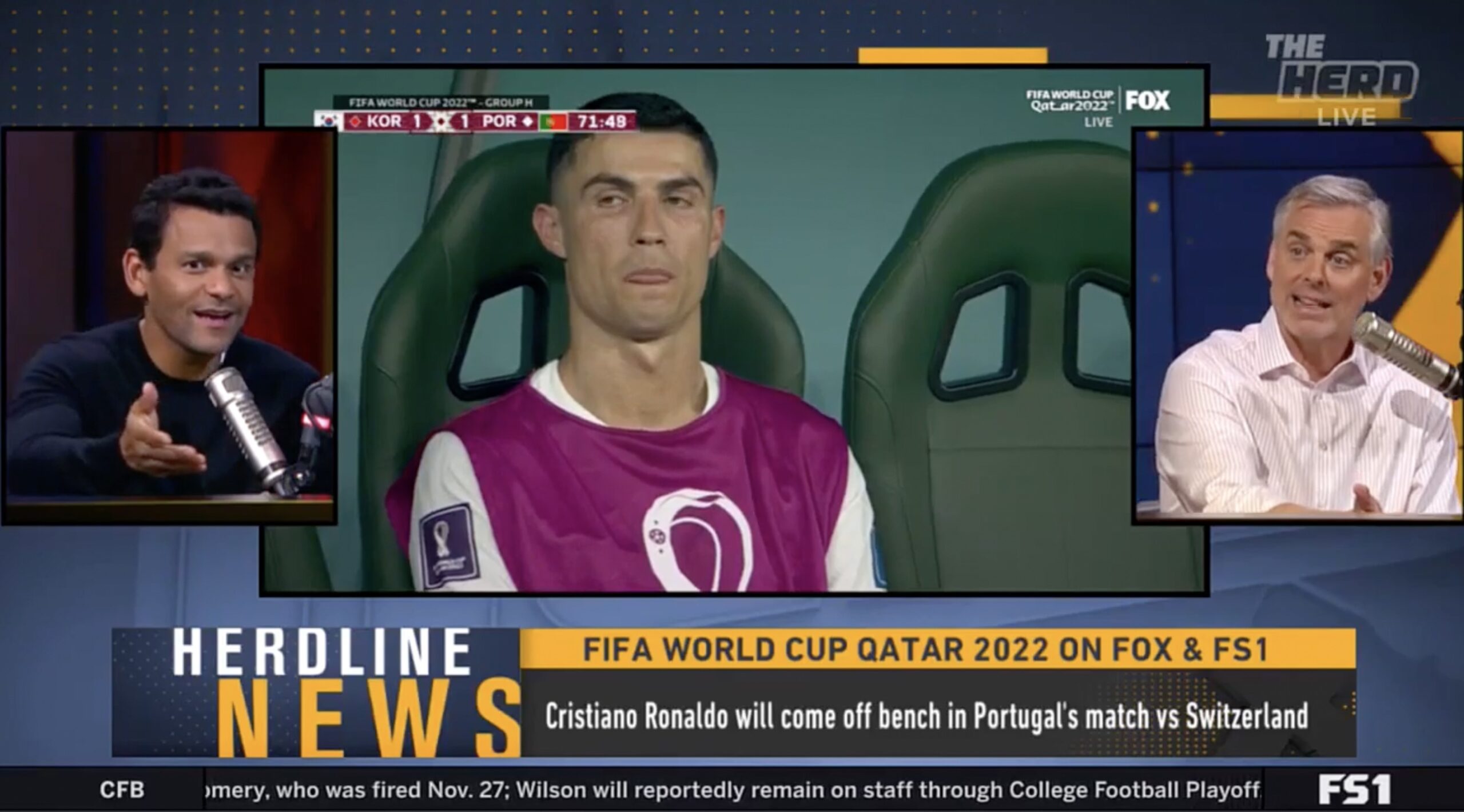 Fox Sports’ Colin Cowherd believes it is tough being soccer superstar Cristiano Ronaldo because of how good-looking the veteran Portuguese player is.

Before Portugual’s game against Switzerland, Portugual’s manager Fernando Santos held Ronaldo out of the lineup. TV cameras showed Ronaldo frustrated as he began to warm up for the match he knew would not start.

The club released Ronaldo, who played for Manchester United, before the start of the 2022 FIFA World Cup, after he did a sit-down interview with Piers Morgan and bashed the club. It has been reported that Ronaldo was offered a contract that would pay him $200 million a year by Al-Nassar, a Saudi Arabian soccer club.

On Tuesday’s The Herd with Colin Cowherd, co-host Jason McIntyre gave Cowherd the news during their Herdline News update. Cowherd had a strange take on why Ronaldo had an ego and why most people hate Ronaldo.

“I think it’s hard to be him,” Cowherd said. “If I was that good-looking, had a $200 million a year job staring me in the face, was the best soccer player in the world. How do you not have a little attitude?”

Cowherd explained that Ronaldo’s good looks were part of who he was, and he would behave however he wanted because of his status in soccer.

Cowherd elaborated and felt Ronaldo should be allowed to have an ego because people on Twitter have one.

“The average loser, who’s anonymous troll on Twitter’s got an ego,” Cowherd continued. “This guy doesn’t get one? If I looked like that and was going to make $200 million my last contract here, id be a nightmare to deal with.”

“He’s Brady if Brady was as good as Mahomes,” Cowherd added.

When McIntyre shot back and said Argentina superstar Lionel Messi did not act in the same manner as Ronaldo, Cowherd once again believed it was because of Ronaldo’s looks.

“Messi’s not an underwear model,” Cowherd continued. “And not making $200 million a year next year for Saudi Arabia.”

Portugal beat Switzerland 6-1, and Ronaldo was subbed on in the 73rd minute. Gonçalo Ramos, who replaced Ronaldo in the lineup, scored a hattrick.

Watch above via Fox Sports 1.