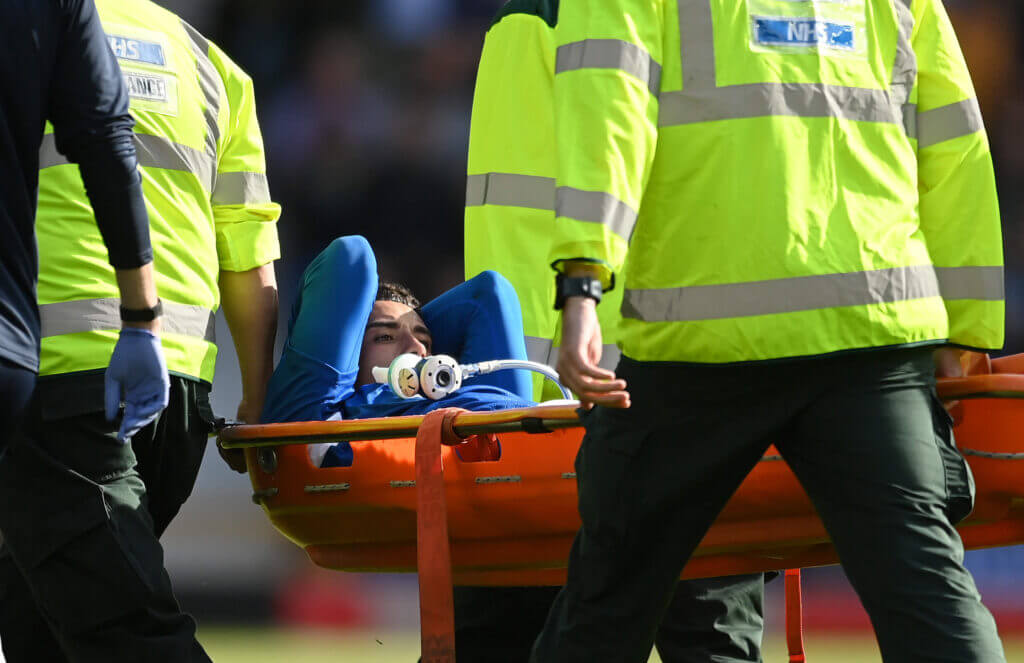 Everton defender Ben Godfrey was taken to hospital after sustaining a lower leg injury during their opening Premier League game against Chelsea.

Godfrey, 24, appeared to injure himself after sliding to tackle Chelsea forward Kai Havertz in Everton’s penalty box early in the first half.

The former Norwich City man immediately signalled for medical attention and there was a lengthy stoppage in play while he received treatment.

Godfrey was eventually taken off on a stretcher while breathing through an oxygen mask.

Everton then gave an update on his condition at half-time with a short statement that read: “We can confirm Ben Godfrey has suffered a lower leg injury and has been taken to hospital. We’re all with you!”

Godfrey’s injury occurred after his wayward backpass to goalkeeper Jordan Pickford. The ball appeared to go out for a corner kick before Pickford managed to clear it to a Chelsea attacker, but the officials allowed play to continue before Godfrey’s challenge on Havertz.

Godfrey has made 54 Premier League appearances since joining Everton from Norwich in the summer of 2020.

He has also made his senior England debut since moving to Goodison Park, with Gareth Southgate handing him two caps in pre-tournament friendlies ahead of the delayed Euro 2020.

Denial of responsibility! Yours Bulletin is an automatic aggregator of the all world’s media. In each content, the hyperlink to the primary source is specified. All trademarks belong to their rightful owners, all materials to their authors. If you are the owner of the content and do not want us to publish your materials, please contact us by email – [email protected]. The content will be deleted within 24 hours.
EnglandEverton
0
Share