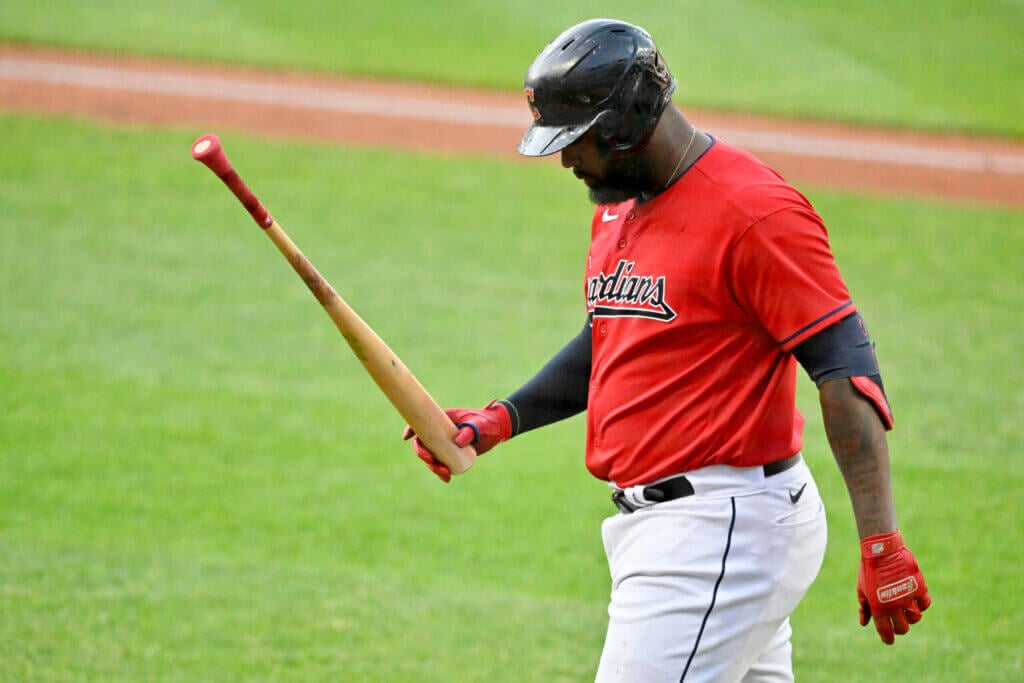 CLEVELAND — Franmil Reyes leaned against the dugout railing at Globe Life Field in October and pondered his future. Cleveland’s lineup was full of question marks, but he represented one of the few certainties, a safe bet to smack 30 or so baseballs to the outfield nosebleeds.

He wondered aloud whether he could amass 45 or 50 home runs and 120 RBIs. He stressed that “Cleveland hasn’t seen it all. Me, I haven’t seen it all. So, I don’t know what’s the limit. I have no limit.”

But when Reyes arrived at spring training once the league’s lockout ceased, he revealed he hadn’t faced any live pitching, and members of the organization thought he was out of shape. Six months earlier, on that afternoon before the season finale in Texas, Reyes said this:

“Going into the offseason, I want to work and come back like I did in 2020 spring training. You know, have my body a little bit more in shape. I want to prepare myself to play 162 games.”

It’s easy to highlight certain criticisms — weight gain, a lack of focus on his craft — when a player’s production craters. But Reyes’ approach to this season seems to have worn on the organization’s chief decision-makers.

Four months later, the Guardians designated Reyes for assignment and released Bradley. Odds are, neither will don a Cleveland uniform again.

The Bradley decision arose because he’ll be a free agent at the end of the year and had no future in Cleveland behind Josh Naylor, Nolan Jones, Oscar González, Will Benson, Owen Miller or whoever ultimately claims the first-base and designated-hitter spots. It also clears a spot for the club to promote an everyday position player to Triple-A Columbus.

As for Reyes, the front office dangled him on the trade market in recent weeks but couldn’t find any takers. Now, he’s available to be claimed by any of the 29 other teams. If he clears waivers, he cannot refuse an outright assignment to Triple A.

The Guardians would have non-tendered Reyes this winter anyway, making him a free agent. (He would have been owed at least $4 million via arbitration.) Now, another team can claim him, stick him on its 40-man roster and essentially grant him a two-month audition to determine whether he’s worth that salary next year. Or, he could clear waivers, return to Columbus and then become a minor-league free agent at the end of the season.

Reyes’ power is a treasured asset in a lineup like Cleveland’s, one full of contact hitters, but his power vanished and his strikeout rate soared to an uncomfortable level. Since the club demoted him to Triple A earlier this week, coaches have raved about having the designated-hitter spot unclogged, freeing up opportunities for Jones, González and Benson and sparing Naylor, José Ramírez and Amed Rosario from playing defense every day.

There’s no denying Reyes’ innate ability. He still swings a forceful bat. Making consistent contact is what proved elusive this season, and he acknowledged the frustration became overwhelming at times.

His chase rate increased, but his contact rate when chasing dropped drastically.

In other words, more swings at pitches out of the zone but far fewer connections on those swings.

Reyes’ 37.1 percent strikeout rate ranks second worst in the majors, ahead of only Joey Gallo, whom the Yankees dispatched out of the Bronx earlier this week. Reyes’ .196 expected batting average (based on the quality of his contact) ranks ahead of only Gallo, Martín Maldonado, Max Muncy and Mike Moustakas. His walk rate plummeted, too.

“He wasn’t getting to the fastball,” manager Terry Francona said, “and it seemed like the hanging breaking ball, he was maybe hitting for a single. And there was an occasional home run, but he just wasn’t getting the pitches he used to.”

Reyes hit 37 home runs in 2019, his first full big-league season. He clubbed 30 last season in only 115 games. He totaled nine in 70 games this season with Cleveland and logged a .350 slugging percentage, ahead of only Austin Hedges and Myles Straw among Guardians regulars. His swinging strike rate (17.1 percent) was more than six times that of Steven Kwan.

Victor Rodríguez, the club’s assistant hitting coach, said Reyes was attempting “to hit a three-run homer or grand slam with nobody on” to atone for all of his unfruitful at-bats. When he forced the issue, he fell deeper into a funk.

“There’s no way from one year to another this guy is going to disappear,” Rodríguez said.

Consider this bases-loaded at-bat against Detroit’s Alex Faedo from May 22. First, Reyes waves at a slider that never sniffs the strike zone.

Then, he swings through a slider that Faedo left near the middle of the zone.

Finally, on the third pitch, Reyes offers a futile swing at another slider that bounces in the dirt.

Three years ago, Cleveland traded Trevor Bauer to the Reds in a three-team deal that landed the club five players: Reyes, outfielder Yasiel Puig, pitchers Logan Allen and Scott Moss and infield prospect Victor Nova. None of the five remains with the organization.

Reyes chatted with new Cooperstown resident David Ortiz earlier this season, the second straight year the two have connected, with assistance from Cleveland’s coaching staff. Ortiz’s message: “Don’t allow them to get rid of you.” In other words, play yourself into their long-term plans. Ortiz reminded Reyes he spent his first six years in the majors with the Twins, who severed ties with him when he was 27, and wasn’t considered much of a potent slugger. He said he was fortunate the Red Sox scooped him up and that he had Manny Ramírez and other veterans to guide him to stardom.

Reyes is bound for a fresh start with a new organization, either next week or this winter.

Denial of responsibility! Yours Bulletin is an automatic aggregator of the all world’s media. In each content, the hyperlink to the primary source is specified. All trademarks belong to their rightful owners, all materials to their authors. If you are the owner of the content and do not want us to publish your materials, please contact us by email – [email protected]. The content will be deleted within 24 hours.
Cleveland Guardians
0
Share

Viking centres, roller skating rinks and the home to Terry’s chocolate orange – the UK city break to visit this summer

I’m a baggage handler and there is a bag you…

Support for Manchin-Schumer spending bill could be…

Young women being ‘put at risk’…