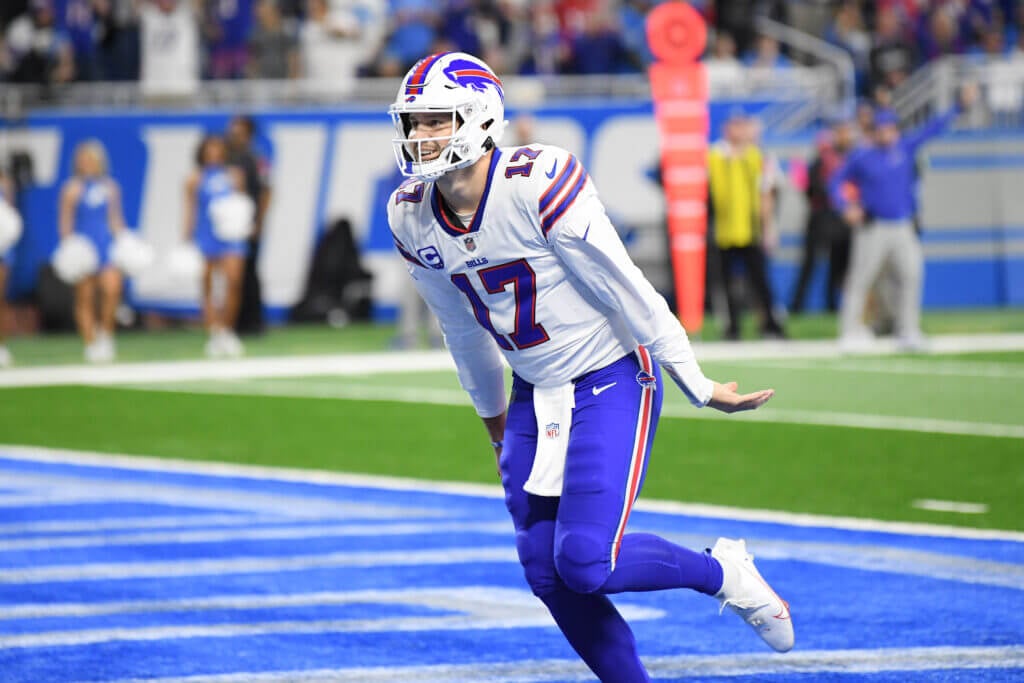 Graham: Even when all is not perfect, Josh Allen can still be remarkable when it matters

DETROIT — Even when Josh Allen isn’t dominating, even as his top receiver declares the Buffalo Bills’ passing game isn’t as sharp as it used to be and worries about Allen’s body language, their big ol’ quarterback still can be pretty damn impressive.

Allen hasn’t played particularly well for a few weeks, and the world has noticed. He has plummeted down the MVP betting chart, losing his status as the favorite and looking up now at Patrick Mahomes, Jalen Hurts and Tua Tagovailoa.

Allen’s performance against the Detroit Lions won’t improve his chances for the game’s highest individual honor, but he was remarkable when it mattered most and powered the Bills to a last-second 28-25 Thanksgiving victory in Ford Field.

“That’s what great players do,” Bills coach Sean McDermott said. “They step in those big moments, and they make big plays in big moments of games like this.”

Allen overcame a few scattershot series to close out the game with panache.

Detroit led 22-19 with nine minutes left, but Allen took Buffalo 90 yards over 14 plays for a go-ahead touchdown. He completed six of his seven throws for 47 yards, the final 5 on a slant to Stefon Diggs in the end zone and ran three times for 19 yards.

On first down, Allen “threw another missile,” said Diggs, who caught it 36 yards downfield at the Lions’ 39-yard line.

“That’s a hell of a quarterback making a hell of a throw in a critical time,” Lions coach Dan Campbell said. “That’s another player making a heck of a play at the end to get themselves in that position.

“That quarterback’s the real deal. He’s a warrior. He’s clutch, and he made a lot of significant plays.”

With all three timeouts, Allen was able to run a couple times for 12 yards, setting up Bass for his 45-yard redemption with two ticks to spare.

As entertaining as the finish was for Bills fans, Allen’s struggles through much of Thursday will keep folks wondering about the health of his right elbow.

Notable among the scrutinizers was CBS Sports analysts Tony Romo, who throughout the game emphasized Allen was playing hurt. National broadcast crews are privy to inside information not disclosed to other media.

So, I asked Allen how healthy he truly is.

“I’m out there,” Allen said with a grin. “Anybody’s playing injury-free in this league, they’re probably lying to you. Everybody’s battling an injury, all the bumps and bruises.

Allen misfired from the end of the second quarter through Buffalo’s first series of the fourth quarter, completing seven of his 21 throws for 76 yards and another red-zone interception. Detroit also sacked him three times over that span.

Allen’s troubles have recurred since the October bye, predating the sprained elbow ligament he suffered three weeks ago against the New York Jets.

Since halftime of the Week 8 victory over the Green Bay Packers, he has completed 58.8 percent of his passes (5.9 points below his season percentage) with four touchdowns and seven interceptions, while being sacked 12 times.

Diggs recognizes the toll such a stretch can take. After conquering the Lions, he made a point to impart words of encouragement to his quarterback.

“As much as I get frustrated, I know his job is hard,” Diggs said. “I look at it as, after the game, rejoice, a moment of ‘We came out on top. Let’s get the ball rolling. Let’s get back to having fun again because I felt like we got away from it a little bit.’

Diggs has needed similar pep talks. He said he “missed a couple” of passes Thursday that could’ve helped Allen and the offense find its footing. McDermott needed to calm down a perturbed Diggs early in last Sunday’s relocated game against the Cleveland Browns.

After winning here at Ford Field for the second time in five days, Diggs explained the Bills’ offense is going through some growing pains.

“I feel like we’re running the ball so efficiently that we’re probably not passing as much as we used to,” Diggs said. “There’s a couple extra passes that might get us in a little bit of rhythm, but we have such a balanced offense right now that it’s hard. We can’t do everything.

“We have to continue to work at it in practice so that way when pass plays do come up, we’re sharper. We’re finding a balance, a real balance.”

Devin Singletary ran 14 times for 72 yards against Detroit and over the past three weeks has rushed for 205 yards and all three of his touchdowns this year.

“In the past, we’ve been pretty pass-heavy,” Diggs said, “but Motor and all the guys in the backfield are doing such a great job we’re finding other ways to win. It’s actually helping us.

“We might not be as sharp in those areas, but we’re working at it.”

McDermott agreed. Although he playfully jousted with a reporter when asked about offensive concerns — the Bills have averaged 29.7 points their past three games — he eventually conceded there are areas to fasten.

“We didn’t execute well at times,” McDermott said. “At times, we’re making it too hard on ourselves just fundamentally, throw and catch, block and tackle. We missed a number of tackles, uncharacteristically of us.”

When the game was on the line, however, Allen and the Bills looked exactly like did against the Los Angeles Rams, Tennessee Titans and Kansas City Chiefs.

Despite playing twice in five days — and knowing they must play the New England Patriots next Sunday, making it three road games in 12 days — the Bills didn’t flinch.

“No panic, understanding we had a chance,” Allen said of what was happening inside his head.

The same could be said for inside the huddle and over those final 17 offensive snaps as Allen made enough time to turn into the hero yet again.

Denial of responsibility! Yours Bulletin is an automatic aggregator of the all world’s media. In each content, the hyperlink to the primary source is specified. All trademarks belong to their rightful owners, all materials to their authors. If you are the owner of the content and do not want us to publish your materials, please contact us by email – [email protected]. The content will be deleted within 24 hours.
buffalo bills
0
Share

Ukraine Update: What was five Russian axes of attack is down to one: the Donbas

Clemson showcases Cade Klubnik and the rest of its…