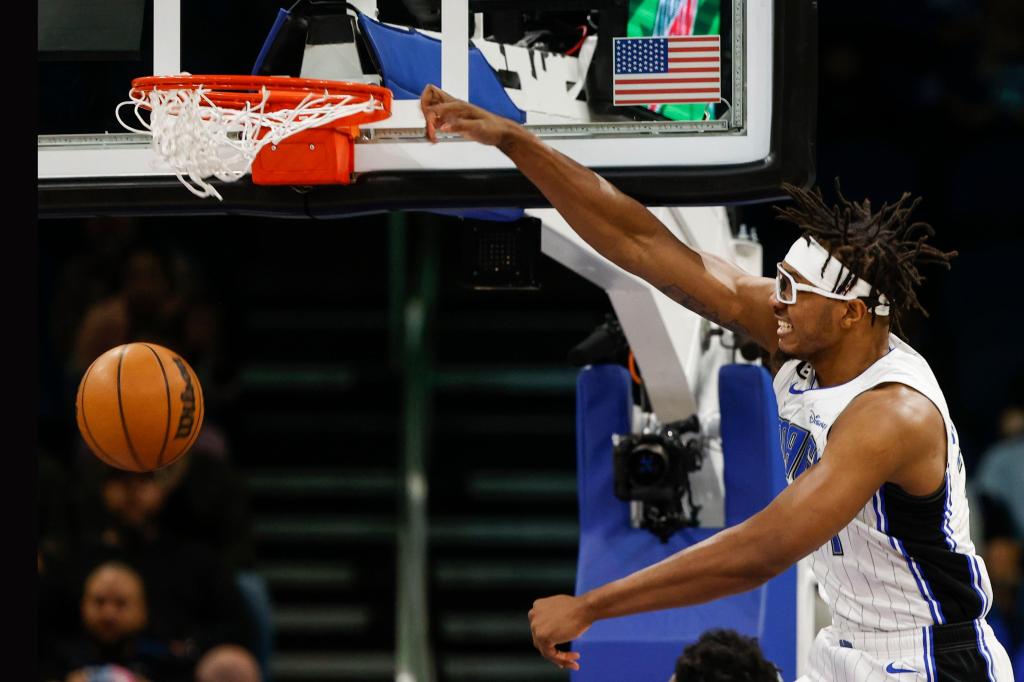 The challenges Orlando Magic coach Jamahl Mosley is facing now aren’t the same ones he faced earlier in the season.

He and the team embraced the early-season demands but welcome the ones they’re facing now even more.

The Magic (19-29) had nearly their entire roster available for Wednesday’s 126-120 wire-to-wire home win over the Indiana Pacers (24-26). Chuma Okeke (left knee injury recovery) was the lone player sidelined because of injury.

“It’s a good problem to have,” Mosley said pregame.

A good problem indeed, especially compared to earlier in the season when the Magic consistently had at least five players sidelined because of injuries.

Now, they’re using their depth to their advantage. The Magic had well-balanced production in Wednesday’s win.

Orlando finished with a season-high 34 assists and had eight players score at least 8 points.

Paolo Banchero led the Magic with 23 points, 4 assists, 2 steals and 1 block, including 13 points on 3-of-4 shooting and 6 free throws as part of an opening quarter the Magic outscored the Pacers 46-29.

Despite the hot shooting carrying over into the second, the Magic allowed the Pacers to cut into their lead. Their fouling (5 personal fouls) and bad ball retention (7 turnovers) in the quarter hurt them, allowing the Pacers to cut their deficit to 73-68 at halftime.

The Magic didn’t open the game back up until early in the fourth, when their second unit got just enough stops to help make their hot-scoring count. Orlando opened the quarter on a 9-3 run in the quarter’s first 4½ minutes to take a 111-94 lead.

The Pacers didn’t go away easily, cutting the deficit to 5 late in the fourth. Markelle Fultz (13 points and 8 assists) made a layup to give the Magic a 121-114 lead with 1:30 remaining. Banchero made a pair of free throws 30 seconds later.

Fultz made 3 of 4 free throws down the stretch, giving the Magic their third win in the last four games.

Gary Harris had a season-high 22 points, making all 6 of his 3-pointers.

The return of Jonathan Isaac, who finished with 5 points (2-of-4 shooting, 1-of-2 on 3s), 2 assists and 2 steals in 8 minutes vs. the Pacers, in Monday’s home win over the Boston Celtics got the Magic closer to being whole. So did the returns of Carter, Gary Harris and Jalen Suggs (8 points and 2 assists in 17 minutes) over the last month.

The challenges with playing returning, especially from more extended absences, are ones Mosley and the Magic prefer. But there are still tangible challenges.

Rotations are altered, with players being used in lineups not previously available. Time for those lineups or new rotations is needed for them to blossom.

There’s an understanding that not every game is going to go as smoothly as it did against the Celtics.

Chemistry will need to be built.

“It’s going to look funky at times,” Mosley said. “I admit that and they understand that. We just have to learn to work through that process.”

There’s also the challenge of players who got playing time earlier in the season having their roles changed or diminished. Mosley’s played 10-11 players the past four games, but not everyone can get playing time.

R.J. Hampton and Terrence Ross were healthy scratches in the last two games.

“When you have healthy bodies, there [are] a lot more conversations that need to be had with each guy individually to let them know where they sit in different roles,” Mosley said. “But understand it’s going to continue to take time. Being able to find chemistry on the court; being able to find out times in different rotations — that’s going to take some time. These guys are willing and they understand that type of process. As we move forward it’ll solidify itself a little more.”

It’s a process the Magic embrace.

“This is probably the shortest our injury list has been since my first five games on this team,” guard Cole Anthony said. “That’s real nice, honestly. It’s been a lot of times over the past couple of years where you get a dude back [and] it feels like we’re getting healthy, another dude goes down that same game. It’s been a constant thread. To see us turning that corner on that side and getting dudes healthy is a blessing.”

This article first appeared on OrlandoSentinel.com. Email Khobi Price at [email protected] or follow him on Twitter at @khobi_price.