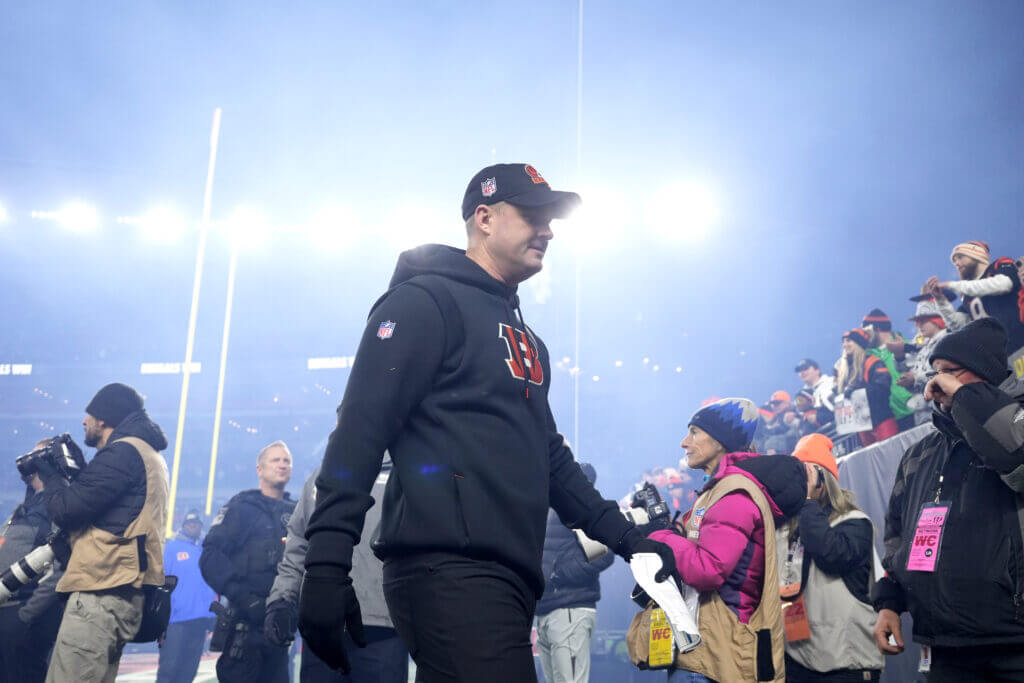 Zac Taylor not only is continuing his tradition of delivering game balls to local establishments following playoff victories, he’s upping the distribution.

Sunday night’s 24-17 win against the Ravens had Taylor signing six balls, one of which he delivered to the Blind Pig across the street from Paycor Stadium, which was packed full of, shall we say enthusiastic fans.

“I think you’d be shocked by how caught off-guard I am,” Taylor said. “I always think I’m walking in to like five people, sober. It’s usually not how it plays out. But it’s fun just to be a part of it.”

The Blind Pig had a line out the door, so a couple of Bengals employees were sent over in advance to make sure security was aware of his arrival so they could get Taylor in and out without issue.

“I don’t know what I’m walking into,” he said. “I didn’t even know there was a staircase to go upstairs. But people are very helpful, and they point you in the right direction. So you get in there, and it’s a fun moment there for a minute. Then you give them the game ball and you move on.”

Bengals safety Vonn Bell delivered one to Crowley’s in Mount Adams, and a third ball is headed to a bar in Over-the-Rhine, but the team is waiting until it arrives before announcing the destination.

The other three are being shipped to establishments out of town.

“I didn’t anticipate it always unfolding like this,” Taylor said. “It’s a really fun tradition that I think our players can be a part of. Not all of the game balls have reached their destination yet. I think that’s something we’ve learned — we can incorporate people out of the Cincinnati area. So I look forward to those balls getting home.”

Sunday’s game ended at 11:17 p.m. and it was even later by the time the players showered and left the stadium. Should the Bengals win in Buffalo on Sunday, there will be more time to assign the game ball distributors and recipients.

“I’ve run out of places to go in Mount Lookout,” Taylor said, referencing the part of town where he lives. “That’s the only area I know. I ask for help. I get directed and usually get good spots.

“We’ve got fans across all states, so you want to find ways to be able to connect with them and show your appreciation for them,” he continued. “Because I’ve been sent plenty of videos of bars across America of Bengals fans uniting, celebrating. I get texts all the time that people were in different cities, different states. So I think this will be a cool way to include them and know that they’ve got a chance at some game balls also.”

In the celebration video from the postgame locker room, Taylor mentioned the big play turned in by linebacker Logan Wilson forcing the fumble on the goal line and Sam Hubbard returning it 98 yards for the game-winning touchdown.

But when he went back and watched the film, he realized he omitted not just a third key participant, but the initiator in linebacker Germaine Pratt. Taylor paused the film and started texting with him.

That’s playoff football, bring on the next.

“I hadn’t realized he was really the first one,” Taylor said. “DJ (Reader) and those guys are low, creating the pile. Germaine’s really the one that stands (Ravens quarterback Tyler Huntley) up first, and Logan’s able to finish the play off, and then obviously Sam finished the other way.”

Asked about the play after the game Sunday and how Wilson and Hubbard were getting all the credit, Pratt shrugged.

“It don’t matter to me, as long as we got the turnover,” he said.

Pratt was the one who came up with the game-sealing interception in last year’s wild-card win against the Raiders, earning the nickname “Playoff P.”

But even though Pratt was all right with most of the credit going elsewhere Sunday night, Taylor wanted to make sure his linebacker knew how much he appreciated what he had done.

“Obviously for Logan to get that ball out and Sam to finish it all off is big time, but you want to make sure guys get the credit they deserve, too,” Taylor said. “When I watched it for the first time and could see Germaine had a big part of it also, it was worthy of praise.”

Taylor also made a point to watch the TV copy of the play to get a better sense of the crowd reaction.

“That play will be remembered forever,” he said. “I was so emotional myself, screaming at all the players — good things — that you don’t get a chance to appreciate the crowd. And so I was kind of watching it for that. And there’s great copies of (Hubbard) running up the field and you can see the crowd in the end zone reacting, and then the shots of the whole stadium, and those are things we don’t always (notice). You are so plugged in on the headset, can’t hear anything, so that was cool to see.”

Asked about the call by NBC play-by-play announcer Mike Tirico, Taylor said he loved it.

“I’ve been a Mike Tirico fan since the 2005 Alamo Bowl when Nebraska beat Michigan 32-28,” Taylor said, referencing his alma mater. “I’ve always had a soft spot for Mike Tirico, so I appreciated that call maybe more than everybody else.”

There’s an assumption that Joe Burrow’s career in Cincinnati will run beyond the length of his rookie contract, with the team eligible to sign the franchise quarterback to an extension this offseason. But Burrow, in an interview with NBC that aired prior to Sunday’s wild-card game, took the commitment further.

The head coach was asked Monday about Burrow including him in his pronouncement.

“I think that speaks the entire organization,” he said. “This is a place that we all love being. We are in here every day, interacting with ownership and personnel and the players, the equipment managers, trainers and video, and it’s just a big family and we want our players to feel that too, like they are taken care of. I like to think Joe feels that, and a big part of that is we’ve got so much trust in him because he puts in the time and the work when we’re in these meetings.”

Bengals owner and president Mike Brown weighed in on Burrow’s future in an interview with team play-by-play announcer Dan Hoard.

“He’s going to have a long career. We certainly want it to be here, and I think his window will extend over his whole career,” Brown said. “But there is the fact that, when you don’t have to pay the quarterback some extraordinary amount, that leaves room to pay other players more, and therefore you can keep more players that are good players. It’s (Patrick) Mahomes and others of that like, they seem to make it go even after they’ve gotten their pay day.”

The Bengals’ trip to Buffalo for Sunday’s divisional round playoff game will mark the first time since 2019 the team has played at Highmark Stadium, and just the second time in the last eight seasons.

But Bengals center Ted Karras has played there in each of his previous six seasons in the league, going 5-0 with the Patriots and 0-1 with the Dolphins. He knows what kind of reception awaits the Bengals and their fans, and he issued a warning.

“I’m sure we’ll have a lot of Cincy travelers. I urge them to be careful,” Karras said. “Buffalo can be a dangerous place. They are going to be rowdy, but it’s going to be a lot of fun.

“Buffalo is one of the most interesting and hostile places to play as visitor,” he added. “You drive through the tailgates, and there are all sorts of colorful gestures your way. There might be some skin. Interesting things happen in the Buffalo parking lot. On the field, it’s very loud. That’ll be something we practice and respect. We haven’t gone silent in a while. We’ll be back to the silent count and with a couple new guys in there we’ll have to really rep that this week.”

Bengals defensive coordinator Lou Anarumo also has played in Buffalo many times, without the kind of success Karras has enjoyed.

The Dolphins went 1-5 during Anarumo’s six seasons as an assistant coach in Miami from 2012-17. The five losses were by an average of 12.1 points, and the lone win came in overtime in 2016.

“My memories are not good,” he said. “Just an unbelievable fanbase, like our fans last night were incredible. Just feeling our energy on the field, but there they are kind of right on top of you. The distance between the bench and the stands can’t be more than 10 feet. I mean they are on you. They are loud, they are rowdy.”

Carl Cheffers will be the referee for the Bengals-Bills divisional round game. This will be the second Bengals game Cheffers has worked this year, as he also did the 20-16 win at Tennessee.

Cheffers has worked one Bengals playoff game, the 26-10 loss to the Colts in the 2014 wild-card round.

The Bills have had much better success with Cheffers in charge, winning each of the last nine games of theirs he has worked dating to 2015, per Pro Football Reference. That includes a 17-3 victory against the Ravens in a divisional round playoff game in the 2020 season.

Cheffers has worked two Bills games this season, the season-opening triumph against the defending Super Bowl champion Rams, and a 35-13 waxing of the Bears on Christmas Eve.

Denial of responsibility! Yours Bulletin is an automatic aggregator of the all world’s media. In each content, the hyperlink to the primary source is specified. All trademarks belong to their rightful owners, all materials to their authors. If you are the owner of the content and do not want us to publish your materials, please contact us by email – [email protected]. The content will be deleted within 24 hours.
Cincinnati Bengals
0
Share