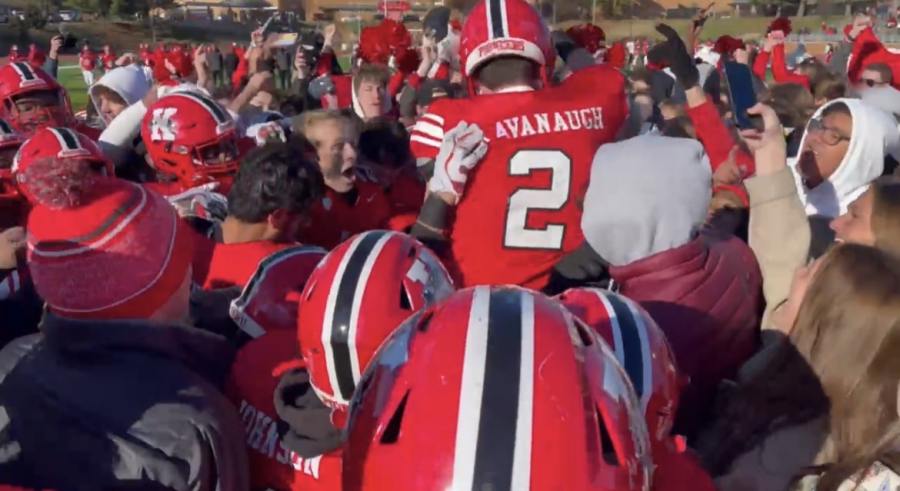 “Just to see everybody come out and support these guys on a cold day, I couldn’t ask for a better job or a better community,” Maclin said. “I’m happy for these guys. These guys deserve it.”

The game was far from conventional, featuring eight total turnovers throughout the contest.

Webster Groves had high hopes to start, recovering a fumble inside Pioneer territory on the first possession of the game. Following a quick three-down series, the Statesmen’s field goal attempt was blocked and returned for a Pioneer touchdown.

This theme would continue.

The Pioneers directly scored off of four Statesmen turnovers, including two fumble recoveries for touchdowns, one interception for a touchdown and the aforementioned blocked field for a touchdown.

Individually, Kirkwood senior Darius Jones stole the show, totalling four touchdowns on the day. Despite his individual efforts, Jones was thrilled to share one last special game with both his teammates and his community.

“It felt amazing, but I’m just happy we got the win,” Jones said. “We kept the [Frisco] Bell. That’s the best part right there.”

Kirkwood’s win brings the all-time record between the two programs to 54-51-7 in favor of Webster Groves.

The Pioneers finish the 2021 season with a 7-3 record. Webster Groves completes a winless season, eyeing a new opportunity for improvement in 2022.

Book this weekend before deals expire