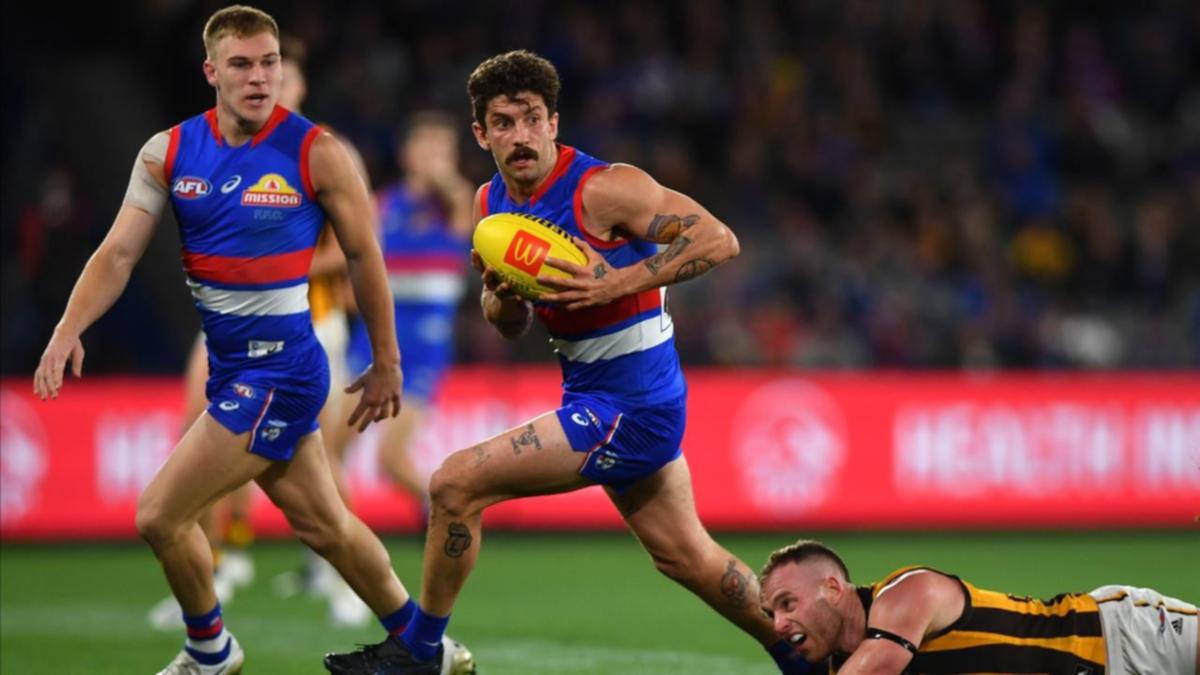 A midfield masterclass from Tom Liberatore has helped power the Western Bulldogs to a 42-point thumping of Hawthorn and boosted their AFL finals hopes.

In doing so, they leapfrogged four rival teams into sixth spot, though each of those have a game in hand.

Liberatore’s numbers were impressive – 30 disposals, 16 contested possessions, 11 clearances, eight tackles, one goal – and his influence around the contest was undeniable.

The Bulldogs trailed by 26 points midway through the second term when the tenacious midfielder injected himself into the contest, negating Ned Reeves’ ruck dominance and turning the tide.

In one of several inspirational acts, Liberatore won a tough ground ball against Changkuoth Jiath on the wing and dished out a handpass to start a possession chain that led to a goal.

The deficit was erased before half-time and the Dogs went on with the job after the main break, booting 6.4 to 0.4 in the third term amid a run of 13 consecutive goals.

Hawthorn showed a hint of fight after the 11th when James Sicily tangled with Aaron Naughton, who accused the Hawks’ stand-in captain of pulling his hair.

Sicily had snatched the Dogs spearhead’s headband in a melee, during which Naughton’s jumper was ripped.

But Naughton had the last laugh with three goals in a comfortable win.

The only downside for the Bulldogs was Ed Richards being substituted out under concussion protocols after he was crunched by Mitch Lewis in a marking contest.

They led 20-0 after just 10 minutes through goals to Lewis (two) and Moore, who took a courageous mark in the goal square for his first major and wrong-footed Tim O’Brien to set up his teammate’s second.

Lewis finished with four goals and Luke Breust three in a side that was well beaten, while James Worpel (25 disposals, seven clearances) fought on in the middle.

Denial of responsibility! Yours Bulletin is an automatic aggregator of the all world’s media. In each content, the hyperlink to the primary source is specified. All trademarks belong to their rightful owners, all materials to their authors. If you are the owner of the content and do not want us to publish your materials, please contact us by email – [email protected]. The content will be deleted within 24 hours.
AFLsport
0
Share