Lou Whitaker gets his due as the Tigers retire No. 1 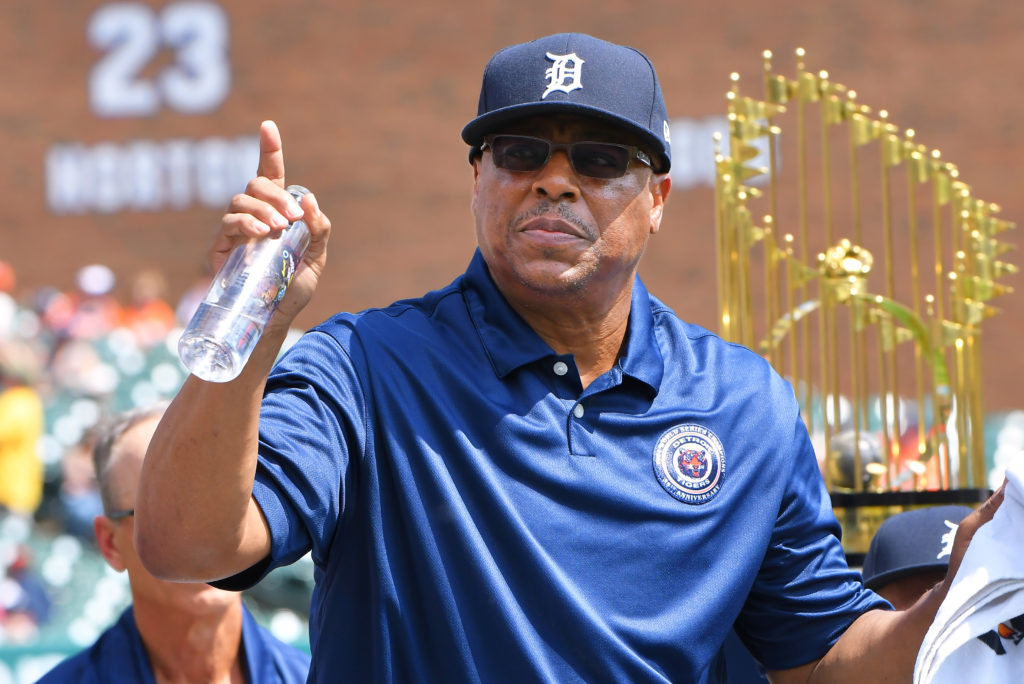 Lou Whitaker was there on the infield. Alan Trammell was there with him. Jack Morris, too. A packed crowd chanted LOUUUUU in a low baritone while highlights of dazzling double plays flashed on the video board.

All these years later, Whitaker can still captivate a crowd.

And perhaps now more than ever, Whitaker was at the center of attention, finally a little more comfortable in the spotlight, no longer the kid from Martinsville trying to navigate life in the major leagues. He is now an older man looking back on his career and his friendships, appreciating the journey back then and all the gratitude that is coming his way now.

The Tigers retired Whitaker’s No. 1 on Saturday at Comerica Park, an honor that had been a long time coming. The ceremony was supposed to happen in 2020 before the COVID-19 pandemic. It had to wait two years so the Tigers could honor Whitaker in front of a full-capacity crowd.

Whitaker stood on a stage constructed on the Comerica Park infield Saturday and thanked the crowd, raising his hands and calling for more as the fans belted his name. He talked of his playing career and 1984. He thanked a large contingent of friends and family from his small Virginia hometown. He recounted stories of playing ball through long summer days, throwing rocks in the air and hitting them with a stick until enough pals would show up for a game. “They are the reason I’m here,” he said.

Now 65, Whitaker cracked a couple of jokes and exuded the grace of a great. He soaked in the moment as stadium personnel removed a black veil on the brick wall out beyond left-center field and revealed his iconic No. 1. His last name is inscribed in white letters below the numeral.

How sweet it is. pic.twitter.com/CXV6GVCUEx

A man too often regarded as introverted or reclusive has slowly opened up with age, never more apparent than these past few days. And a man too often overlooked because of his size or his market or his position is finally getting his due.

“Up there with people I used to see when I grew up, when we were playing, up there with Trammell and Morris, two teammates, that’s huge,” Whitaker said.

Whitaker on Saturday became the 17th name honored on the walls at Comerica Park and the 10th jersey number retired. Any mention of Whitaker these days opens a similar discussion about whether he should also be mentioned in the Hall of Fame.

Earlier this week in the Tigers clubhouse, manager A.J. Hinch sat with pitchers Tarik Skubal, Tyler Alexander, Will Vest and Jason Foley. “We had a little bit of an assignment,” Hinch said.

He was telling them about Whitaker’s career, and he had the players pull out their phones and look up Whitaker, comparing the arc of his career to that of Trammell, the Tigers’ Hall of Fame shortstop who is still an ever-present figure around the organization. Current players know and revere Trammell. But they don’t all realize his double-play partner of 19 years — the longest and most prolific double-play tandem in baseball’s history — was equally as good. Whitaker had 2,369 career hits. He was the 1978 Rookie of the Year, made five All-Star teams, won four Silver Slugger Awards and three Gold Gloves. Whitaker ranks seventh all-time among second basemen with 75.1 career Wins Above Replacement, a total higher than 15 other second basemen in the Hall of Fame.

Whitaker, of course, received only 2.1 percent of the vote in his lone appearance on the BBWAA ballot in 2001. In 2019, he received only six of the 12 votes needed to earn introduction via the Modern Era ballot. He will next be eligible for induction this winter through the Contemporary Baseball Era players committee.

Hall of Fame or not, Whitaker is a legend in Detroit. That much was already clear, but now his name and number are on the wall, further cementing his legacy as one of the greatest players in the history of a franchise that has existed since 1901.

“For four years I’ve been uncomfortable,” said Trammell, who had his number retired in 2018. “I’m extremely honored and grateful to have my No. 3 retired. There wouldn’t be a No. 3 on the wall if not for No. 1.”

Whitaker’s number is now, fittingly, just to the right of Trammell’s on that brick wall. But Saturday was all about Whitaker alone. He said he knew he would be dazed when they unveiled the number. “Give me some time,” Whitaker said. “One day I’ll come back in a year, a few years, a month, maybe. I’ll come back to see my name, just see what it’s like, see what it really feels like.”

Whitaker was around Detroit for the past several days. There was a lunch and a dinner, interviews, people to meet, hands to shake and stories to share.

“I’ve heard some beautiful comments,” Whitaker said, “talking about, ‘Lou, you’re gonna have a nice crowd at the field. They’re coming to see you.”

He said that message brought him to tears.

Denial of responsibility! Yours Bulletin is an automatic aggregator of the all world’s media. In each content, the hyperlink to the primary source is specified. All trademarks belong to their rightful owners, all materials to their authors. If you are the owner of the content and do not want us to publish your materials, please contact us by email – [email protected]. The content will be deleted within 24 hours.
detroit tigers
0
Share