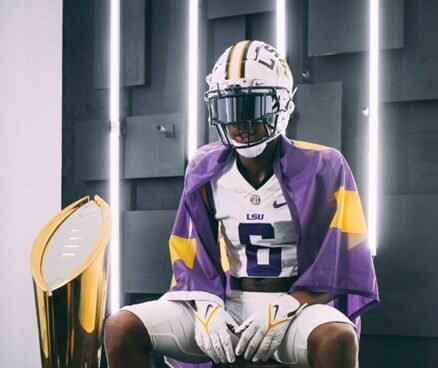 BATON ROUGE, La. — Gabe Fertitta had an idea, one he’d been thinking about for a while, only to be expedited by a pandemic in summer 2020. The then-head coach at prestigious Catholic High in Baton Rouge wanted his players to get noticed in these tough times, but there was no seven-on-seven, no college camps, no spring ball. So he created his own event and got his staff and 15 or so parents to help put together the first “Cur Dog Combine.”

College coaches got wind. Recruiting services made the trip. And before the day was finished, local trainer Ken Anio received a text from a recruiting reporter.

“The guy you’ve been telling me about, we just clocked him at a 4.35,” the reporter said.

But it was true. Multiple stopwatches confirmed the time in the 40-yard dash. A rising sophomore wide receiver named Shelton Sampson Jr. had just announced himself to the world by displaying the speed hidden underneath his long, rangy 6-foot-4 frame. And on Saturday, the now five-star recruit announced his commitment to hometown LSU.

After the combine, Anio soon got on the phone with Virginia personnel staffer Jordan Arcement, now at LSU, who asked Anio to send clips of Sampson “doing something spectacular.” Anio sent junior varsity highlights of Sampson making leaping grabs over defenders and displaying his high-point abilities.

Arcement quickly responded: “We’re gonna offer the kid. This kid is special.” Mississippi State joined the same day. Louisiana Tech too. The dominoes soon fell with major powers like Georgia, LSU and Florida State (where Fertitta is now on staff) all in.

It was around then that those around Sampson said they saw the light turn on even more. Always a humble kid, he put the work in. He decided to quit basketball and baseball early and asked his parents to help fund trainers and coaches to excel at football. But Anio had a talk with Sampson after this national breakout, telling him, “It’s time to lock in. You’re about to have a radar on your back.”

“It was at that moment I think he realized, ‘It’s time for me to take my game to another level,’” Anio recalls.

Two years and one week later, Sampson provides new LSU coach Brian Kelly with his highest-ranked prospect in the 2023 class and, maybe more importantly, his first top-100 commit from Louisiana. Outside of the big-name quarterbacks — Arch Manning and Eli Holstein — who were always planning on leaving the state, Sampson was the most sought-after player in Louisiana.

Now, he’s the crown jewel in Baton Rouge. But he’s not acting like it.

After Fertitta left for the college ranks before Sampson’s junior year, Catholic hired up-and-coming coach David Simoneaux. He inherited a typically talented Catholic roster with plenty of stars, but there was no denying Sampson as the bell cow.

But shortly after Simoneaux arrived, Sampson injured his knee playing for his local seven-on-seven team.

“That just got in my grits, man,” Simoneaux said. “I was like, ‘Golly, this kid doesn’t have to play seven-on-seven ever again. He can go to any school he wants to. He’s just wasting his time out there.’”

So Simoneaux talked to Sampson about it, likely giving him a little grief for his decision. Sampson’s response caught him off guard.

“Well, OK. Who am I to take that experience from you?” Simoneaux responded.

That’s the makeup of Sampson. He’s the son of two college athletes, his mother Latoya playing volleyball at Northwestern State, where his father played running back. Shelton Sr. coached Sampson from a young age, and both parents implemented a message of humility. They constantly repeated that Sampson’s gifts are God given, with Latoya saying, “If this is given by God, how do you thank God? By being very, very humble.”

He’s also a low-key kid, often described as “chill.” It took Simoneaux a little while to break through the reserved barrier, and his parents say he’s the type to just have friends over to play video games. But so much of his demeanor throughout this rise has been by design. Latoya and Shelton Sr. insisted on home being an escape from the drama of recruitment. Latoya and Sampson have the close kind of relationship in which she can go into his room and ask how he’s feeling or what’s bothering him or what she needs to help shelter him from. “We wanted home to be a safe haven for him,” she said.

They’ve created a team around him to help manage this phase of his life. His godmother, Whitney Breaux, works in global marketing at Eli Lilly and has become his manager of sorts, handling media and branding. His commitment week has included biographical videos and a rollout of thank you videos to each team in the mix for his decision (LSU, Florida State, Texas A&M and Alabama). They’ve created a brand called SS6. His team of Breaux, Anio and his parents hold meetings with him, discussing plans and challenging him with tough questions to prepare him for life in the big time.

“These kids become Twitter famous at a young age,” Simoneaux said. “Some of them gloat about it and want to brag about it. I think Shelton would be fine to do away with all that stuff. … I think he’d rather just be a normal kid.”

Simoneaux’s favorite story of Sampson being different is when he detached the tendon from his pinkie finger in preseason camp before the 2021 season. First, he went weeks without telling anyone to the point the doctor got frustrated with him. He missed the first few games, but as soon as the pins came out, he insisted on returning to the field. He even thrived with the swollen finger, making two leaping catches over current LSU player Jordan Allen of Lafayette Christian Academy.

But two weeks later, he re-detached the tendon. He had the option to have surgery to end the season — and protect his college future — but he refused.

“The finger was disgusting,” Simoneaux recalled. “I mean, gross. Fat, thick, it was curled up. He had to extend it every single day, tape it to the other finger and put it in a split just to be able to go out there and catch. On his right hand, he was catching with three fingers.”

Latoya believes part of Sampson’s dedication comes from the loss of his paternal grandmother, Rhonda Sampson. The two were close, but she became ill with lupus. Right before she passed in 2019, she beckoned for one last person: Dude, as she called Sampson. “Where’s Dude?”

Dude was at a basketball tournament, but they rushed him back as soon as possible to say their final goodbyes. They kissed and had a final exchange. Then, he went to take a shower, and she passed 20 minutes later.

“He took it very hard, and he used football to cope with the grief,” Latoya said.

That’s why Sampson’s announcement after-party event is raising money toward the Lupus Foundation of America and why the family often tries to work toward helping the foundation.

Shortly after her death, Sampson’s profile exploded. Anio and Simoneaux saw him take football more seriously than ever, because all those dreams were in reach. They said his maturity improved. His work ethic increased, with Anio having him work with other major Louisiana prospects like defensive backs Kylin Jackson and Jordan Matthews and quarterback Rickie Collins. Anio also has him train with NFL players like Russell Gage, Danny Johnson and Chad Williams to rough the younger guys up, and Sampson adapted.

LSU is getting a highly coveted five-star prospect in Sampson, and people tend to point out his ability going up for balls in the air. They see the 6-foot-4 receiver with long limbs who beats most every Louisiana corner on a 50-50 play. Plus, those long limbs lead to a long stride that somewhat deceives.

“What makes him different is his size and speed. What makes him great is he also has great hands, great vertical ability, and you’d think because he’s so tall you gotta be stiff in the hips, but he bends like a 5-foot-9 receiver. So he can come out of his breaks well.”

Then, Anio paused for a moment.

Denial of responsibility! Yours Bulletin is an automatic aggregator of the all world’s media. In each content, the hyperlink to the primary source is specified. All trademarks belong to their rightful owners, all materials to their authors. If you are the owner of the content and do not want us to publish your materials, please contact us by email – [email protected]. The content will be deleted within 24 hours.
LSU Tigers
0
Share

As Indiana passes abortion ban, some South Carolina Republicans pause on the brink of tightening laws

How Brittney Griner, superstar basketballer, trailblazer and ‘the best of the best’ ended up in a Russian jail