Mandel: With Deion Sanders at Colorado, anything feels possible 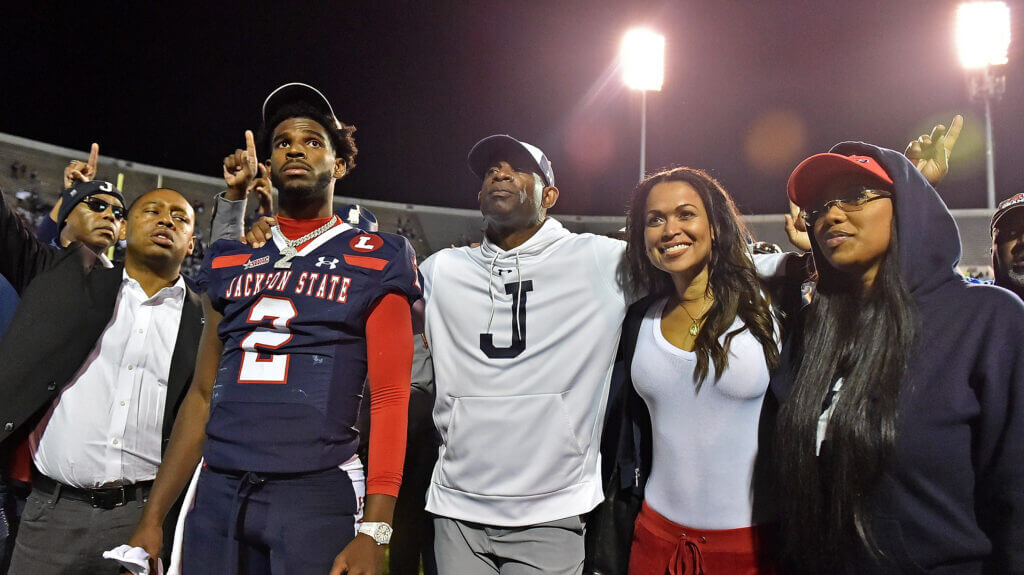 When Colorado athletic director Rick George fired yet another losing football coach, Karl Dorrell, five games into this season, a common question across the profession became: Who would even want that job?

Somebody wanted it, and he happens to be the most exciting hire the school could have possibly made.

Deion Sanders is coming to Boulder.

It hardly seems reals. Of all people, the former NFL and Major League baseball star, the guy in the AFLAC commercials, actually wants to take over the Pac-12’s most beleaguered football program. Coach Prime, whose Jackson State team is 23-2 the past two seasons and who convinced the No. 1 recruit in the country to sign with an FCS school, is coming to the rescue of a program that has had two winning seasons in the past 17 years.

It’s the most exciting thing to happen to Colorado football since Kordell Stewart to Michael Westbrook.

“I don’t think I can express in words how big this is for the Colorado football program,” said former Buffaloes quarterback and current Fox Sports analyst Joel Klatt. “This is a really proud program that desperately needs someone like Dion for energy, notoriety and exposure.”

Last spring I interviewed a bunch of former Colorado coaches, players and administrators for a story on the 20-year demise of the one-time powerhouse. They spoke proudly of the Buffs’ rise to the top of the sport in the 1990s under program savior Bill McCartney, but they also expressed a sense of hopelessness about Colorado’s future.

“As a player, every time I stepped on the field I expected to win,” former All-American linebacker Chad Brown said then. “I’ve had to remove that expectation from my rooting interest in the Buffaloes. I’d be disappointed all the time if I held that mindset still.”

“This attempt to go after Deion and get him has renewed my spirt as a former Buffalo, that the folks in charge aren’t going to let this program just fade off into obscurity,” he said.

They’re happy because Coach Prime gives them hope. And there hasn’t been much of that to go around the last 20 years. Colorado has never been an easy place to build a successful football program. The state doesn’t produce enough talent. The community is transient. The fan base is loyal, but not necessarily large. And the relationship between the university and the football program has not always been harmonious.

It had gotten to the point in recent years that fans wondered whether the administration was even willing to invest in the program. They were scarred when Michigan State swooped in and hired away Mel Tucker after just one season at Colorado by more than doubling his $2.4 million salary.

Colorado reportedly offered Sanders a $5 million a year, with enough money to assemble a quality staff as well. And George said recently that the university is working to solve an academic issue that has made it difficult for the program to bring in transfers. Dorrell’s 2022 roster got decimated by portal exits, and he did not manage to bring in nearly as many. Sanders would not be coming without assurance he’ll be able to recruit both high-schoolers and portal guys to the same extent as his competition.

“Colorado — which, let’s face it, was not going to win many recruiting battles a week ago — is going to be on the radar of almost any transfer or any uncommitted recruit because of him,” said Klatt.

Sanders will be unlike any coach in FBS football. He was a celebrity long before he became a football coach, and now he’s football coach who conducts himself like a celebrity.  Which is probably why higher-profile programs than Colorado weren’t in hot pursuit of an ostensibly desirable coach.

But Sanders does not need to conduct himself like his commercial co-star Nick Saban. He’s got his own style, and his players truly look up to him. In a video released late Saturday of the team meeting where he told his players he was leaving, it’s easy to see how he can be such a powerful mentor to the 18- to 22-year-old young men he coaches.

“I love what he does transforming boys into men into competitors,” said former Colorado All-American offensive lineman Ryan Miller. “He did great things at Jackson State, and I’m excited to see if he can revive the program. He commands respect, and I hope it translates to some wins.”

And yet, he will have no shortage of skeptics. What if, after all the initial hype, he crashes and burns?

The more interesting question for Colorado: What happens if he doesn’t?

It’s hard to say what the program’s ceiling is in today’s sport because it’s spent so long hovering closer to the floor. Its lone recent moment in the sun was Mike MacIntyre’s 2016 team, which rose up to win 10 games and a division title. But that was a senior-heavy team built via recruiting classes annually ranked 12th in the Pac-12. The Buffaloes slipped right back to 5-7 once they graduated.

We haven’t yet seen the possibilities with a coach like Sanders, who may truly start bringing in elite talent. He’s expected to bring with him his son, quarterback Shedeur Sanders, the 2021 Jerry Rice Award winner (given to the top freshman in FCS). Additional touted transfers will likely follow. The cupboard in Boulder is too barren to pull a Lincoln Riley-esque overnight flip, but it would not be surprising if he upgrades the roster in a hurry.

In parallel, he’ll need to assemble an all-star staff. Luring top-shelf assistants to Colorado is not generally easy, but Sanders may have the clout and the administrative support to pull it off.

And then there’s the competition. USC and UCLA are leaving the Pac-12 after next season. Oregon is the one remaining program that consistently recruits at a high level. Utah is the league bully. Washington is on the rise under first-year coach Kaelen DeBoer but is not yet swimming in talent. The Arizona and Bay Area schools are playing catch up.

Just getting Colorado back to a bowl game would be a highly appreciated feat right now, but it feels like Sanders could accomplish so much more. He just led Jackson State to consecutive SWAC titles, the program’s first since 2007.

And that’s why this is moment is so profoundly exciting for Colorado fans. It truly feels like anything could be possible.

Because just getting Sanders to come to Boulder feels like a miracle unto itself.

Denial of responsibility! Yours Bulletin is an automatic aggregator of the all world’s media. In each content, the hyperlink to the primary source is specified. All trademarks belong to their rightful owners, all materials to their authors. If you are the owner of the content and do not want us to publish your materials, please contact us by email – [email protected]. The content will be deleted within 24 hours.
college footballColorado Buffaloes
0
Share

Biden and Trump help Warnock, Walker by staying out of Georgia

How those Selling Sunset mega-mansions in LA stay looking pristine, even when empty – the legions of workers behind the scenes