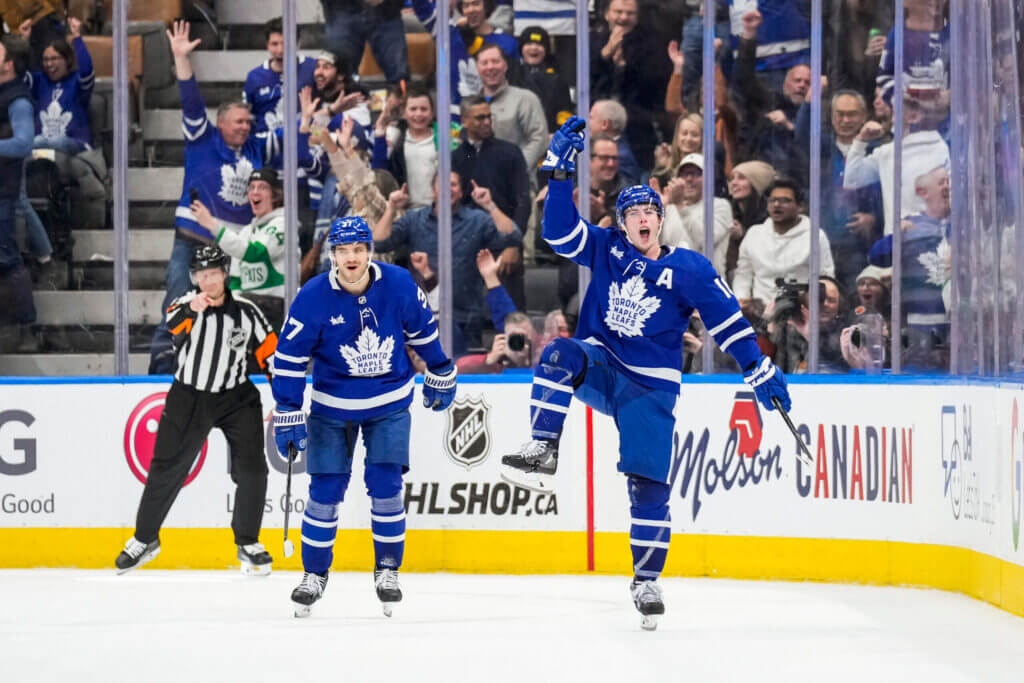 This was a donut game. It started off alright with a goal early in the first, the middle was empty and had no substance to it, but then you get to the end pieces. That’s where the flavour settles in, you reach those better parts of the donut, and when it’s all said and done, the game ends 19 seconds into overtime after an incredible effort.

The Leafs had a lot of reasons to lose, and it felt as if settling for a point would’ve been enough. But from the third period on, it was their game. They controlled the pace, they controlled the chances, they tied it and it was over.

Could you tell Keefe really wanted this one?

Keefe has the passion pic.twitter.com/tWp5qh1Y1J

On to the reports.

Marner is a player we expect the highlight high-effort plays from and we got some of them, one of which was spectacular. He was fighting forecheckers off to maintain possession of the puck in the offensive zone and made a few solid passes to Matthews and Tavares on the power play. However, the lack of simplicity at times works against Marner, and that second goal against starts with his inability to get the puck out of the zone choosing to make a play instead of clearing it.

Luckily the Leafs bounce back and it was Marner’s time to right the wrong and secure the win. He did just that, literally by himself, skating through the New York Rangers and tucking the puck behind Igor Shesterkin.

ARE YOU KIDDING ME!? pic.twitter.com/9ArfVAh5kF

Fact, not opinion: The Leafs don’t make it to overtime without Samsonov. He had another steady and impactful game making key stops and keeping the Leafs in it allowing them to build momentum and tie the game. Yes, Samsonov did get some luck from the hockey gods (sorry Chris Kreider) and some open looks on shots, but even when the Leafs looked sluggish and out of it, they still had an opportunity to win. Imagine if that point-blank deflection from Panarin goes in. The game is over at that point.

And after stopping 27 of 29 shots, the scorching hot home record continues.

The delay of game calls are getting a bit too consistent but that tying goal was a beauty. Liljegren really turned it on offensively when the team needed to tie it being aggressive from the point and playing below the goal line when it was safe. He had an excellent read after Tavares deflected the shot to cut across the slot and bury it past the Rangers’ netminder.

THE POWER OF THE LILYPAD pic.twitter.com/qG7eUnTOnd

Tavares was the king of chaos in front of Shesterkin. He led the team in shots (eight), individual scoring chances at 5v5 (five), and individual high-danger chances (four). His deflection off of Nylander’s shot was key for the goal to happen and it was good to see Tavares continuously going to the tough areas in front of the crease and in the corners to keep the pressure going.

It was a bit of a quiet night for Nylander at first and I didn’t notice him save for some rush chances but that changed in the third. Something clicked, and not only was he moving his feet more, but he was digging for pucks along the corners and working it in different areas of the offensive zone.

Plays like that led directly to his 400th NHL point getting the secondary on Liljegren’s goal and Keefe loved his play so much that he was getting a lot of double-shifts playing on his own line and on the left of Matthews.

I really liked McMann’s game. He puts pressure on carriers or players trying to chorale the puck. The speed and the determination of his efforts make it difficult for them to get a hold of the puck and it forces them backward out of the defensive zone when they’re trying to advance with it.

Kerfoot started the play off in the first period to get the puck out of danger and out of the defensive zone up to Anderson. I also liked his speed on the forecheck being one of the first of the trio to get the puck and ring it around the boards to start the cycle. It would’ve been good to see him get the game-tying goal as he had a look on Shesterkin when out with Marner in the third.

BULLET OF A BACKHAND pic.twitter.com/x1CMbcmDcN

Matthews was around the slot a lot but couldn’t get his shot going. They were either getting stopped, blocked, deflected or ringing off the post. Matthews was doing his own blocking as well which wasn’t only a team lead for the night with three but adds to his league total where he is one of the best and most consistent at it.

Järnkrok was in the battle with Tavares at times in front of the net. He had a sneaky shot on Shesterkin with a crowd in front but he managed to make the save.

A quick pass to Holmberg earned Anderson his first assist with the Leafs in the NHL. It also looks like Anderson has an underrated ability to draw penalties. It’s not from being sneaky or tricky, but he keeps his feet moving and is faster than the players covering him.

Sandin was up to his usual business of offensive rushes, spin-o-ramas, and pinching hits along the boards. He was outworked early by Kaapo Kakko to get to the net and was slower on some of his defensive reads.

Nothing really flashy or fiery from Bunting tonight. He is a great outlet for Matthews and Marner in the offensive zone when they’re working the puck, especially when he cuts in front of the opposition and gives either of his linemates space to get to it first.

I didn’t notice Engvall too much at 5v5 though he did help Samsonov with that big save in the first on K’Andre Miller.

Really good sliding block on the penalty kill. The Rangers were bound to capitalize on one of those man advantages, and a pass like that getting through could’ve been costly.

Was it a mistake or a skill play from a skilled player? Kämpf loses that draw to Chytil and has his stick become part of a highlight reel goal.

In fact, Kämpf wasn’t too good in the faceoff dot in general tonight with a measly 35 percent success rate in the circle. That said, he won that opening overtime draw to Marner which made the winner possible.

Some good defensive plays from Rielly, especially with his stick on incoming players entering the zone. No giveaway is good, but Rielly has a knack for making some really poor ones in the worst spots. It was good to see him mix things up a bit on the power play and actually wire a slap shot.

Similar to Holl tonight (and I’ll get to him next), I noticed Giordano overcommitting to either side in the defensive zone. He was beaten on some rushes against as well and I’ll never get pushing or guiding a player into your own netminder.

I find you can tell fairly early what kind of game Holl is going to play. He’s at his best when he keeps things simple and doesn’t try to do too much with the puck. On the penalty kill, he was played by Panarin and drawn way out to the right leaving an open lane for the Rangers to shoot, luckily they didn’t have any traffic in front of Samsonov. Later, instead of making the breakout pass, Holl chose to skate with the puck along the boards, get pinned, lose the puck and have it go back into the Leafs end. And finally, there’s his effort on Chytil’s second goal that didn’t amount to anything.

The Leafs should feel good about this game. Not because of the way they played overall, which was another unfortunate half-on/half-off performance at times, but their willingness to stick with it and push. The built-in excuses were there. “It just wasn’t their night,” or “The goaltender stopped them when they tried to tie it.” And let’s be real here, Shesterkin stopped them many times. The Leafs had 14 scoring chances to the Rangers’ four in the third. This easily could’ve been an outcome where we applaud their effort for making it close until Kreider redeems himself and scores the empty netter.

I was very impressed with the lack of flash in the third. The Leafs weren’t going for flashy skilled plays in the third. It was hardnosed grind and chaos. Throw the puck in front of the net, collect the rebound, work it back to the point and try again.

The Leafs finding this play in combination with amazingly consistent goaltending from Samsonov is paying off.

What’s next for the Leafs?

Battle of Ontario on a Friday night? Why not! The Leafs will continue their homestand against the Ottawa Senators (7:00 p.m. SNO) and hopefully, the habit of losing to teams they should beat comes to a halt.

Denial of responsibility! Yours Bulletin is an automatic aggregator of the all world’s media. In each content, the hyperlink to the primary source is specified. All trademarks belong to their rightful owners, all materials to their authors. If you are the owner of the content and do not want us to publish your materials, please contact us by email – [email protected]. The content will be deleted within 24 hours.
toronto maple leafs
0
Share

Workers need a $7000 pay rise to keep up with cost of living, analysis finds