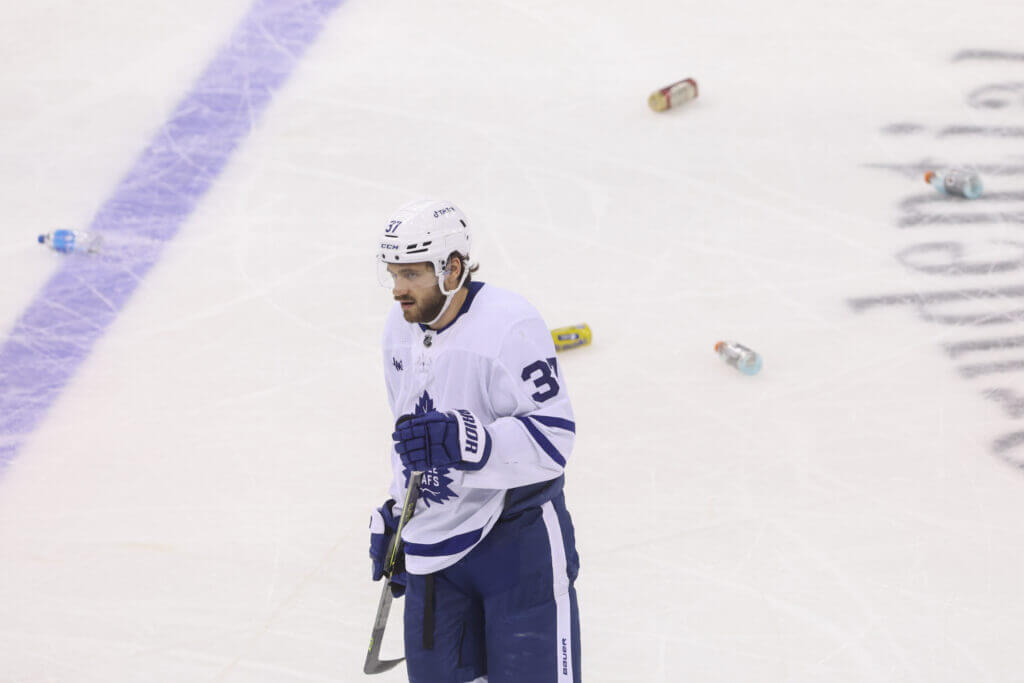 We saw one of the wilder games of the year on Wednesday night, with the Maple Leafs going into New Jersey and ending the Devils’ 13-game winning streak.

Or did they? The standings will say they did, but that doesn’t mean Devils fans have to accept it. While the final score will go into the books as 2-1 for Toronto, the Devils actually put the puck past Matt Murray four times on the night. The first three didn’t count, thanks to a pair of goaltender interference calls followed by a distinctive kicking motion ruling. By the time that last goal was wiped off, furious Devils fans in attendance were pelting the ice with beer and debris, while others were venting online about the obvious conspiracy.

Do they have a case? As the self-appointed rulebook guy around these parts, I’m here to help. Let’s do this Q&A style.

Should the first Devils goal have counted?

The first no-goal came early in the first, with a Dougie Hamilton point shot beating Murray. The goal was immediately waved off, and replays showed that Nathan Bastian was in the crease. Lindy Ruff and the Devils challenged, but the call on the ice was confirmed.

It’s the right call, as you already know if you read my detailed guide to understanding goalie interference. As that post explained, the key to any goalie interference ruling is usually the crease — if the attacking player is in there, it’s probably going to be no goal. Bastian clearly is, and he’s in Murray’s way as the Leafs’ goalie tries to slide his pad across to play the shot.

But he barely touched him!

True, but that doesn’t matter. There’s contact, and it’s enough that it “impairs the goalkeeper’s ability to move freely within his crease or defend his goal.” According to the rulebook, that makes this an easy call. In fact, it doesn’t even matter if there’s any contact at all. If a player is in the crease and in the goalie’s way, it’s supposed to be no goal. And while there’s enough of a gray area to occasionally make this a judgment call, they almost always give the goalie the benefit of the doubt.

As I’ve said more than a few times, even if you understand the rule you’ll still run into cases where a call is debatable. That’s part of the reason I think we should get rid of these reviews altogether. But this wasn’t one of those times. The refs got it right, both initially and on further review.

So Lindy Ruff was wrong to challenge it?

Well… maybe. That’s a trickier question, because a goal in the low-scoring NHL is a big deal. You don’t have to be 50/50 to make a challenge worth it, because the penalty for failure is only a two-minute minor. If you think it’s 60/40 or even 70/30 that you’re going to lose, it’s probably still worth it to roll the dice.

But in this case, I think it was close to 90/10, or maybe just 100/0. Remember, the call on the ice was no goal, so in theory, a close call was going to against the Devils. And again, this one wasn’t all that close. I’m betting Ruff wishes he had this one back.

OK, but what about the second goal? If barely touching a goalie means a goal can’t count, can we assume that wiping him out is just as clear?

Weirdly, no. I actually thought the Devils had a case here.

The contact is far more obvious. But it also comes outside the crease, and the rules are different on the white ice. If the goalie is out of his crease, incidental contact is now allowed. Tomas Tatar clearly runs Murray over, but unlike with the first goal, he’s allowed to be where he is as long as he doesn’t initiate the contact on purpose. Did he? Maybe, and players know how to make this stuff look like an accident. But I think you could argue that he’s just coming around the net and Murray steps in front of him, which would make it incidental contact and a good goal.

So the Devils got screwed!

Well, except that Ruff could have challenged and he didn’t. Again, the call on the ice was no goal, so he’s taking a risk if he challenges. But he decided not to, and it’s kind of tough to complain about a call when you have the right to challenge and you don’t use it.

Wait, Ruff could challenge the second goal? Didn’t he lose his challenge on the first one?

No. That’s now how the rule works anymore. It used to, back when the penalty for a missed challenge was losing your timeout. But the league changed the rule a few years ago, and now coaches can challenge as often as they want.

There’s one important detail here: If Ruff had challenged and had the ruling go against him, the Devils would have taken a double minor instead of the usual minor. That’s the added penalty for being wrong more than once. Maybe that impacted Ruff’s calculation here. Or maybe he just figured it wasn’t his night when it came to replays. But he could have challenged if he’d wanted to, and if he had, I wouldn’t have been surprised if he’d won.

If the ref thought that play was no-goal, doesn’t the rulebook say that he has to call a penalty on the Devils?

It kind of does, although I’ll admit I’m a little bit dicey on this one. There are two sections of the rulebook that deal with the situation where contact outside the crease is deemed non-incidental: Rule 69 in the main rules, and then again in Table 16 at the end. Table 16 makes it sound like it’s an either-or: It’s either incidental contact and a good goal, or it’s non-incidental and the offensive player gets a penalty. Rule 69 sure seems to say that too, although there’s just a little bit of vagueness that I may not be parsing correctly. But yeah, I always thought it was one or the other, and the ref should have given the Devils a penalty if he was going to wave off the goal.

So the Leafs got screwed!

Don’t even start, Devils fans are mad enough at me as it is.

Before we get to the third goal, what was the deal with Matt Murray pushing the net off and breaking the mooring? Isn’t that supposed to be a delay-of-game penalty?

Absolutely. Midway through the game and with the Devils pressuring, Murray slid across his crease and pushed his net off so hard that it took several minutes to fix it. That was clearly intentional, and yes, it’s supposed to be a penalty. The ref has to decide if the net was dislodged accidentally or on purpose, and he can give a delay-of-game penalty if it’s the latter. In this case, it clearly was, and it should have been two minutes. Devils fans have every right to be mad about this one, although at least this time it didn’t directly cost them a goal.

Hey, shouldn’t we fix this by making all dislodged net calls automatic just like puck-over-glass so that it is black-and-white and we just get it right?

Don’t even joke about this, some dumb GM is going to suggest this at the next meeting.

OK, on to the third(!) waved-off goal. Can Devils fans be mad about that one?

By this point, it’s 2-0 Leafs midway through the third. The Devils score again, and this time the call on the ice is a goal. But then there’s an automatic review from the situation room to see if it was kicked in.

And… yeah, that’s kicked in. The “distinctive kicking motion” rule is confusing and poorly conceived, but that one is pretty clear. Erik Haula swings his skate at the puck in an obvious kick, and he’s the last Devil to touch it, so it was never going to count.

He kicked the pucks, sure, but not directly into the net — it was deflected in off a Leafs’ skate. Doesn’t that matter?

Nope. We’ve mentioned a few places where the rulebook is frustratingly vague on things, but in this case, it’s crystal clear. Rule 37.4 says a puck can’t be kicked in, even if it ultimately goes in “by means of a subsequent deflection off of another player.” The fact that Haula didn’t even really kick the puck in the direction of the net doesn’t matter. Neither does his intent. Once he kicks it — and he clearly did — it’s not going to count unless another Devil gets their stick on it before it crosses the line. Nobody did, so this was the easiest call of the night.

You can think that’s not how the rule should work and maybe they change it someday. But as currently written, this one was pretty easy.

Bottom line, do Devils fans have the right to be furious here are not?

Let’s start with the obvious caveat that it’s not OK to throw debris on the ice or in the direction of players or officials. But beyond that … sure, be mad. You’re hockey fans. You’re not supposed to be objectionable, you’re supposed to love your team and want them to win and see everything through that lens. Booing the ref is part of the NHL fan experience. The Devils had a bunch of critically important calls go against them, including an unheard-of three that cost them goals, and it all happened in a game where they were gunning for history. Absolutely, be as mad as you want.

Just know that the refs were right on two of the goals, and on the other one your coach could have challenged and he didn’t. Never let reality get in the way of a good meltdown, but in this case, the facts are the facts.

Denial of responsibility! Yours Bulletin is an automatic aggregator of the all world’s media. In each content, the hyperlink to the primary source is specified. All trademarks belong to their rightful owners, all materials to their authors. If you are the owner of the content and do not want us to publish your materials, please contact us by email – [email protected]. The content will be deleted within 24 hours.
new jersey devilstoronto maple leafs
0
Share

Is there a UK train strike this weekend? Everything you need to know

35 Beauty Products That Are Still on Sale at…

Drunk man grabs flight attendant by the neck after…