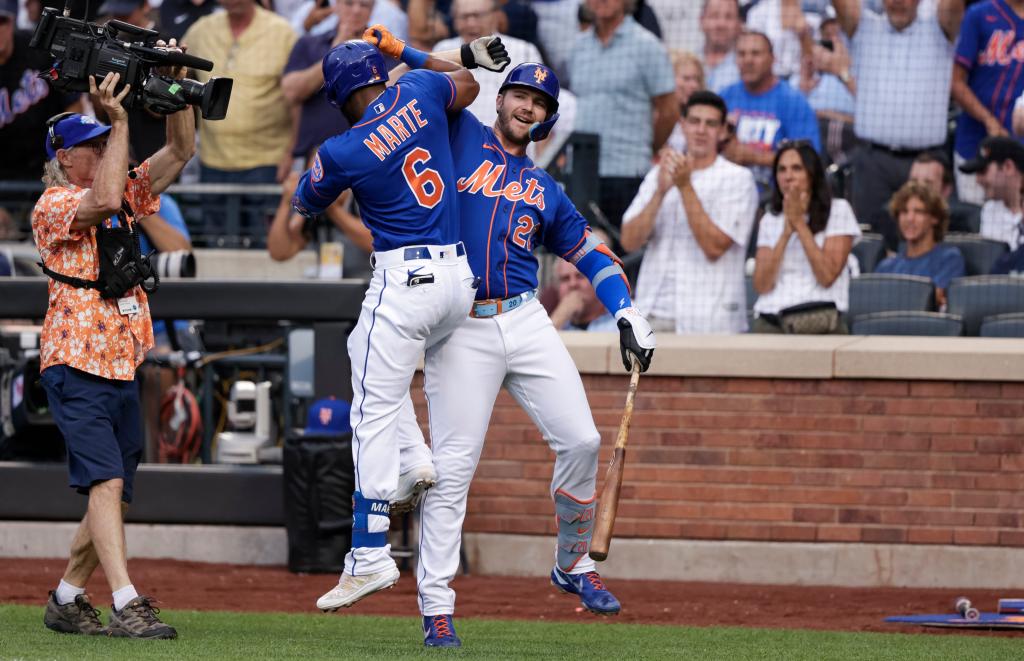 To reach that ambitious total of matchups, the Yankees and Mets would play their three remaining regular-season games and follow that with a Subway World Series stretched to the limit. Who says no?

Tuesday night the sellout crowd of 42,364 at Citi Field got their money’s worth in the first inning alone, with a home run derby of sorts between the teams. The Yankees hit two and the Mets matched them, but doubled their runs.

The remainder turned into a pitching battle in which the Mets parlayed their early lead into a 6-3 victory. The win was the Mets’ fifth in seven Subway Series games over the last two seasons.

Starling Marte and Eduardo Escobar — two key offseason additions — provided the thunder for the Mets with blasts against Jordan Montgomery. Taijuan Walker had an acceptable start for the Mets, but the bullpen was better, with Adam Ottavino and Edwin Diaz combining for three scoreless innings. Diaz recorded the final four outs for the save, entering in the eighth to strike out pinch-hitter Joey Gallo with a runner on first.

The Yankees, who placed Giancarlo Stanton on the injured list before the game with left Achilles tendinitis, finished 0-for-6 with runners in scoring position.

The Mets had a second straight solid offensive showing after struggling to score runs in five games that surrounded the All-Star break. It came as the team considers adding further offensive firepower to the lineup after last week trading for Daniel Vogelbach.

Walker’s night started with consecutive home runs allowed to Aaron Judge and Anthony Rizzo in the first inning that gave the Yankees a 2-0 lead. Judge’s homer was his MLB-best 38th of the season, and his 82nd RBI briefly tied Pete Alonso for the lead.

But the Mets jumped Montgomery in the bottom of the inning to go ahead 4-2. After Marte’s homer just inside the left-field foul pole, Francisco Lindor and Alonso smacked consecutive doubles, the latter of which drove in a run. Escobar delivered a two-run homer with two outs to cap the inning.

Marte’s double leading off the third helped the Mets score an unearned run against Montgomery and take a 5-2 lead. The ensuing batter, Lindor, chopped a grounder that Josh Donaldson threw away — he plunked Lindor in the helmet running to first — allowing Marte to score. Lindor never advanced beyond second — he was thrown out between second and third to conclude the inning after the throw to the infield following Escobar’s fly out briefly eluded the cutoff.

Get all the latest live and local coverage from the New York Post as the Yankees and Mets face off for Game 1 of the 2022 Subway Series.

The lefty Montgomery lasted only 2 ¹/₃ innings and allowed five runs, four earned, on five hits with three strikeouts. The outing was Montgomery’s shortest of the season.

Walker escaped a potential catastrophe after loading the bases with one out in the fourth. DJ LeMahieu brought in a run with an RBI groundout before Judge walked on four pitches to reload the bases. Rizzo followed with a drive to deep center that Brandon Nimmo grabbed for the final out.

Though shaky early, Walker made it nine straight starts lasting at least six innings, a career best. Overall, he allowed seven hits and one walk, departing after 101 pitches. The two home runs allowed matched his total in his previous eight starts combined.

Jeff McNeil’s RBI single in the eighth against Albert Abreu gave the Mets an insurance run. Lindor and Alonso singled in succession to begin the rally. Alonso finished 3-for-3 with a walk.

Denial of responsibility! Yours Bulletin is an automatic aggregator of the all world’s media. In each content, the hyperlink to the primary source is specified. All trademarks belong to their rightful owners, all materials to their authors. If you are the owner of the content and do not want us to publish your materials, please contact us by email – [email protected]. The content will be deleted within 24 hours.
Aaron Judgeanthony rizzoEdwin Diazjordan montgomeryMLBnew york metsnew york yankeespete alonso
0
Share

Library of Congress explains why it hosted Jackson…

Richard Hammond and James May Reunite After A…