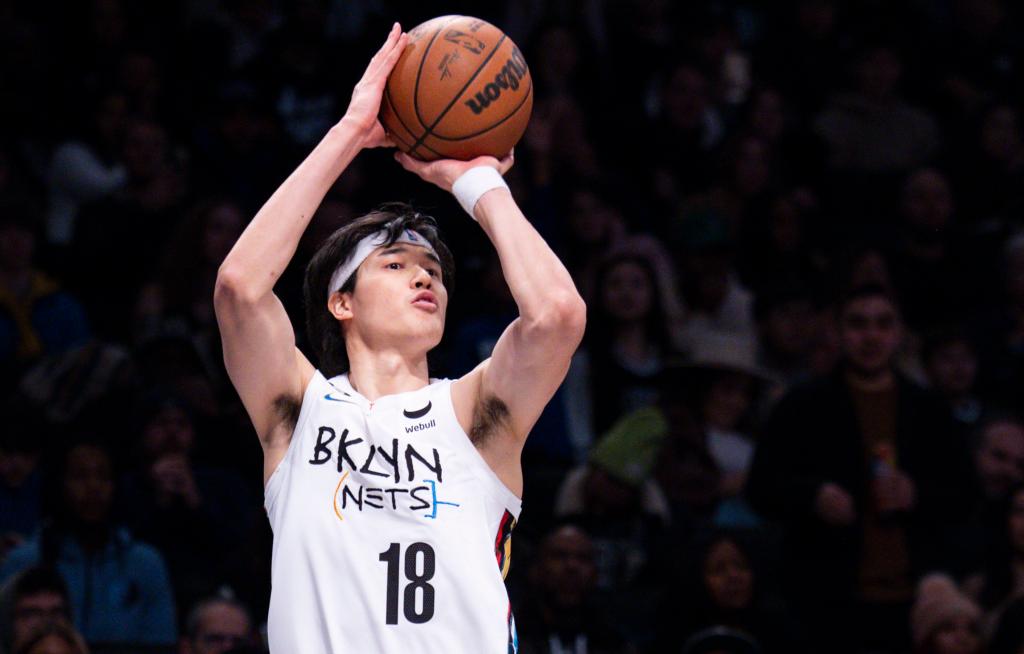 TORONTO — The Nets will be without rapidly developing glue guy Yuta Watanabe at least through the rest of their current road trip.

The fan favorite has a strained right hamstring and won’t play at least until Sunday against the Trail Blazers at Barclays Center.

“He got an MRI [exam] in Philly and Yuta has a hamstring strain,” Jacque Vaughn said before the Nets beat the Raptors 112-98 on Wednesday night, adding that he would miss that game and the game Friday at Indiana. “So we’ll reassess him when we get back home.

“Definitely miss him. I spoke a little bit [Tuesday] of how I put a little bit of strain, because it gives us the ability to play big and small. And there was a stretch where we just missed him, so we had to run Royce [O’Neale] a little bit longer, he ends up playing 38, 39, 40 minutes. So it puts a strain on the group overall.”

“So we just want him to remain confident and shoot the opportunities that he gets out there. He makes the game a lot easier and we have guys that are willing to sacrifice their body night-to-night, we want to reward them, especially when they’re shooting the ball.”

Raptors coach Nick Nurse watched as Watanabe became a fan favorite in Toronto, but never quite stayed on the floor long enough to fulfill his potential.

“[He gave us] a lot of what you’re seeing he provides there. He’s a utility player, plays hard, runs and cuts and shoots, a good complementary piece to an offense because he understands spacing and cutting very well. Never quite shot the ball as well with us as he is with the Nets this year, and never stayed very healthy with us.”

“He had some really good moments where it looked like he was trending. … He came out of preseason last year really playing well and looking like he’s going to be a big part of the rotation and then goes down with an injury and finally got that corrected about December started playing well again, then he got COVID. Just kept running into a roadblock with us was probably the biggest thing. But very, very good team player and provides a lot of little things for a team.”

In addition to Watanabe, Seth Curry (left ankle) and T.J. Warren (left foot) were out for the Nets.

Warren hasn’t played since signing this summer, but he is getting closer to being cleared for full practice.

Fred VanVleet (non-COVID illness) and Scottie Barnes (knee) were out for Toronto.

Ben Simmons, Kyrie Irving, Kevin Durant, O’Neale and Nic Claxton started for the Nets. Claxton told The Post his “non-COVID illness” was just a cold, and he should be free to have his minutes expanded.

Denial of responsibility! Yours Bulletin is an automatic aggregator of the all world’s media. In each content, the hyperlink to the primary source is specified. All trademarks belong to their rightful owners, all materials to their authors. If you are the owner of the content and do not want us to publish your materials, please contact us by email – [email protected]. The content will be deleted within 24 hours.
brooklyn netsjacque vaughnnbaSportstoronto raptors
0
Share

Mandel: With Deion Sanders at Colorado, anything feels possible

Is Elon Musk in over his head?

I replaced my MacBook with a Quest Pro for a full…