NFL Fans Discover There’s a Chip In The Football… Through a Tweet: ‘We Can Get Rid Of The Chains?’ 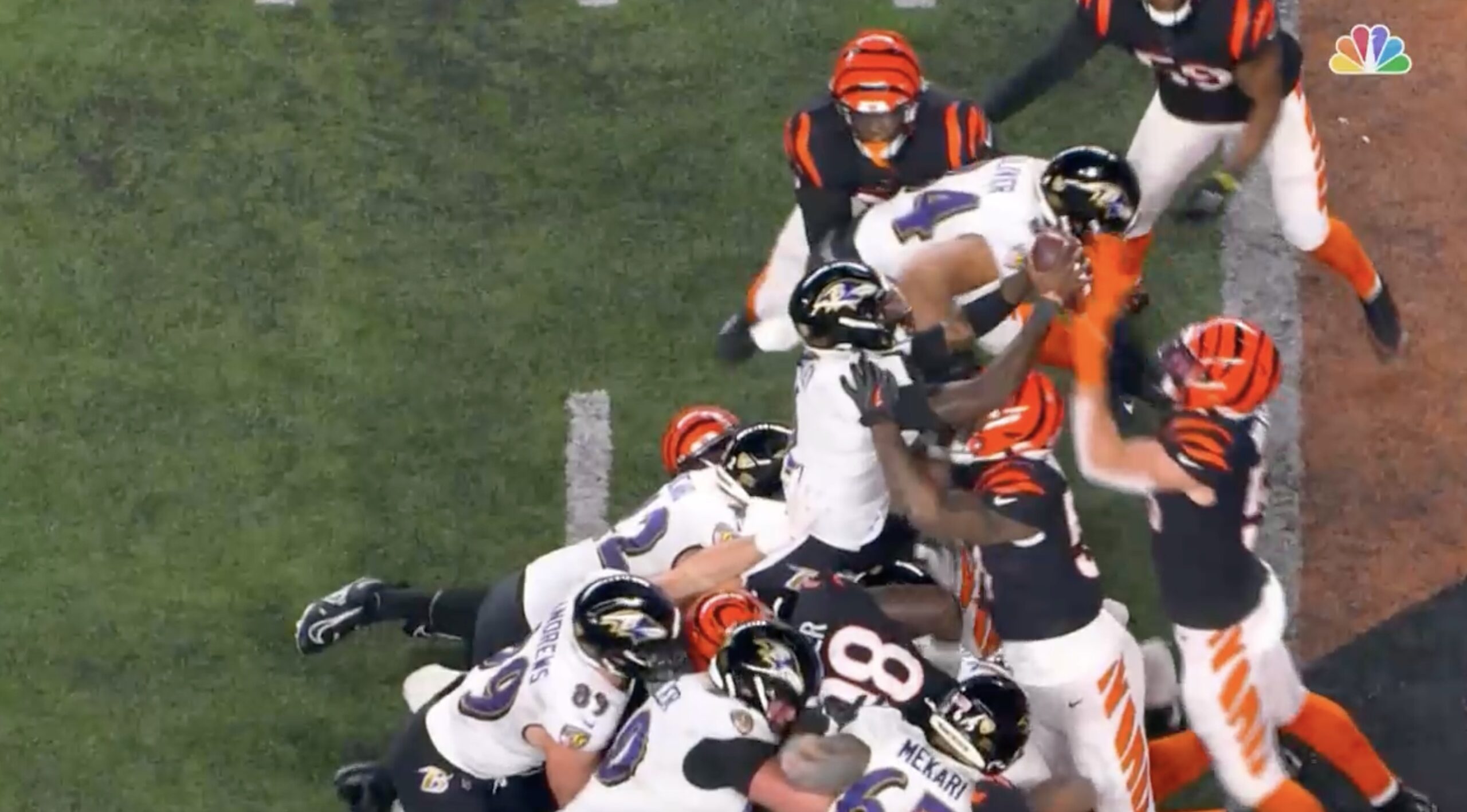 In a tweet, the NFL quietly announced to the world that they have been putting a chip in the football to help determine if the ball crosses the goal line.

In Sunday night’s game between the Baltimore Ravens and Cincinnati Bengals, Ravens quarterback Tyler Huntley attempted to leap for the endzone to score a touchdown with the game tied at 17. He came up short and fumbled the ball, which Bengals defensive lineman Sam Hubbard recovered and returned for a 98-yard touchdown. The touchdown became the difference in the game as the Bengals went on to win 24-17 to advance into the NFL’s Divisional Round.

The NFL revealed on their Next Gen Stats Twitter account that there was a chip in the ball after they disclosed how close Huntley was to scoring the touchdown:

How close was Tyler Huntley to crossing the plane with the football?

According to the chip in the football, the closest the ball got to the end zone was 0.6 yards from the goal line.

How close was Tyler Huntley to crossing the plane with the football?

According to the chip in the football, the closest the ball got to the end zone was 0.6 yards from the goal line.#BALvsCIN | #RavensFlock | #RuleTheJungle

The NFL took a similar path as soccer, which viewers saw throughout the 2022 FIFA World Cup in Qatar. Officials in soccer’s biggest tournament and their biggest leagues use the chipped soccer ball to help determine if the ball entirely crosses the goal line for a goal.

Now, the NFL, whether it was purposely or not, admitted they have finally upgraded its product to get touchdown calls correct. Football fans seemed to be stunned at the confession late Sunday night. Many fans complained that NFL uses markers on the sidelines to measure if a team crossed the first down line. Does the NFL still need the “chain gang?”

OHHHHHHH so there's a chip in the football that can tell us how far the ball gets from the end zone down to an accuracy of .1 yards?????? https://t.co/WjPNQ7CGjc

We got a chip in the football and we're still using the eye line test to determine first downs and touchdowns? https://t.co/cn0yK6J9aO

According to the what in the what?! https://t.co/QkF8Fss3Q0

prayers up to the social media person who accidentally told us that there's a chip in the football while we still rely on shitty refs to spot the ball https://t.co/pgxayCe35V

Everybody: THERE'S A CHIP IN THE FOOTBALL?

I was tonight years old when I learned there's a chip in the football.

(Probably should have figured that out, as that's how the dot animations are made, but yeah)

So, um… say, uh, NFL… why are we not measuring things like first downs, spots and touchdowns with said chip? https://t.co/ehcemzLZI3

According to the chip in the football… So, we can get rid of the chains? https://t.co/olA5PFR6GX

We're just casually dropping that there's a chip in the football??
Why isn't the #NFL taking advantage of this during the games? https://t.co/D7ViiAC44j

Watch above via NBC.

The post NFL Fans Discover There’s a Chip In The Football… Through a Tweet: ‘We Can Get Rid Of The Chains?’ first appeared on Mediaite.