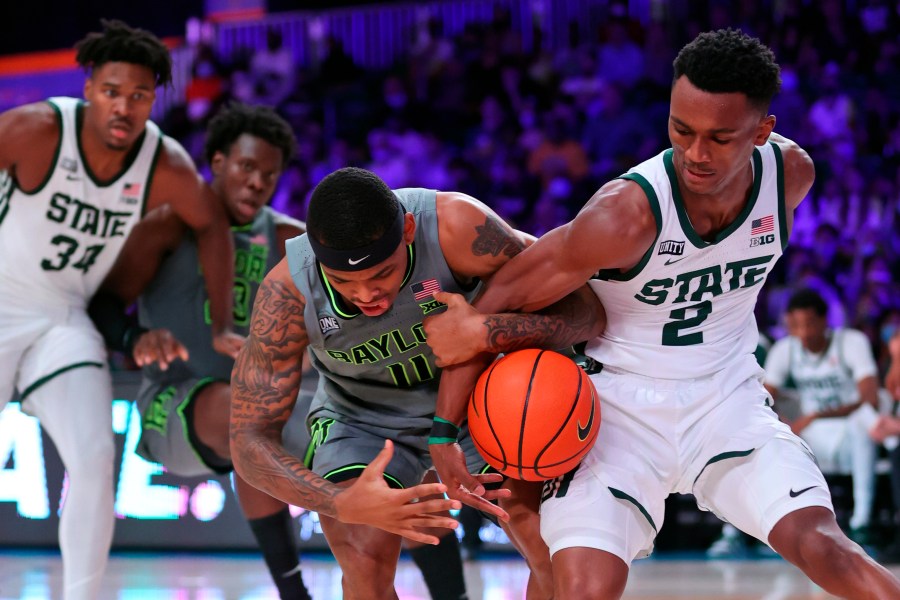 The reigning national champions led just 38-36 at the break. But they began to take control in the opening minutes of the second half, throwing some full-court defensive looks at the Spartans and capitalizing on their mistakes.

The Bears used an 8-0 run to stretch out to a double-digit lead, ending when Akinjo corralled a thrown-away inbounds pass against pressure by Tyson Walker and buried a 3-pointer to make it 55-42 with 13:57 left.

Baylor (7-0) never let Michigan State within single digits again, improving to 6-0 all-time at Atlantis going back to its 2016 championship run.

Freshman Kendall Brown added 12 points on 6-for-7 shooting for the Bears, who shot 49% and had four players score in double figures.

Gabe Brown scored 13 points for the Spartans (5-2), who shot just 37% and missed all seven of their 3-pointers after halftime. Michigan State also committed 19 turnovers for the game.

Baylor: The Bears beat Arizona State 75-63 in Wednesday’s first round, and then earned a 69-61 win against VCU in Thursday’s semifinals, with that result marking their first game decided by a single-digit margin. They appeared to be headed for another close one, but their balance and athleticism allowed them to pounce when the Spartans made mistakes. Baylor has now won 13 straight dating to last year’s title run in the Indianapolis bubble.

Michigan State: The Spartans hadn’t lost since falling to fourth-ranked Kansas in the Champions Classic season opener. They had to grind their way through their first two games in the Bahamas by beating Loyola Chicago 63-61 on a last-second alley-oop dunk by Marcus Bingham Jr., and then beating No. 22 UConn 64-60 by closing the game on a 9-0 run. But they couldn’t counter Baylor’s depth after halftime.

If recent history is any indication, the Bears could have another title in their future.

Villanova won the 2017 Atlantis title and went on to claim a second NCAA championship in three seasons the following April in San Antonio. Then Virginia followed the same route, winning here in 2018 and then claiming the program’s first national title in 2019 in Minneapolis.

But 2019 winner Michigan didn’t get the chance to test the trend once the 2020 NCAA Tournament was canceled due to the COVID-19 pandemic, which ultimately put the Atlantis tournament on hiatus for a year.

Baylor: The Bears get a week off before hosting Arkansas-Pine Bluff on Dec. 4.

Michigan State: The Spartans host Louisville in the ACC/Big Ten Challenge on Wednesday.