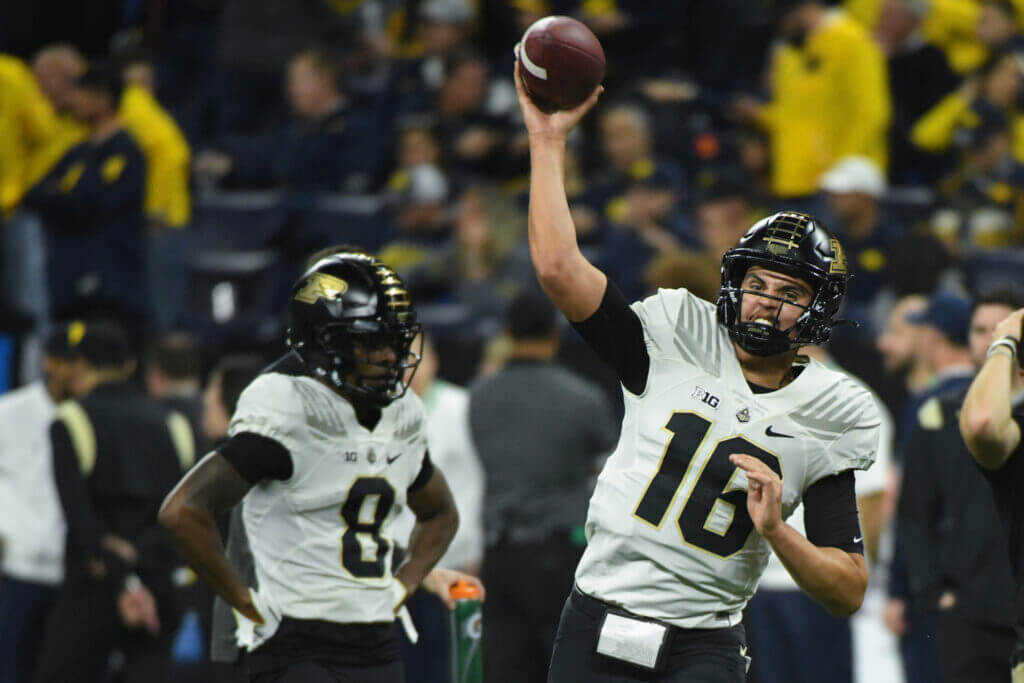 INDIANAPOLIS — One week ago, Aidan O’Connell played through heartbreak and tears, the emotions spilling out of him as he stood on the sidelines with teammate Charlie Jones and team chaplain Marty Dittmar late in the Old Oaken Bucket Game. Just days earlier, his older brother Sean passed away suddenly, and as the final seconds ticked off the clock in Bloomington, O’Connell placed a towel over his face to obscure his torment.

“It’s amazing he even played,” one Purdue staffer told me that day.

And yet, if you’ve followed the arc of O’Connell’s six-year college career, one that began with him as a walk-on who placed eighth on the team’s depth chart, you understand this young man is made of the right stuff.

Saturday night at Lucas Oil Stadium, No. 2 Michigan revealed itself as the best team in the nation, save maybe for Georgia. O’Connell played brilliantly (32-for-47 for 366 yards) in a closer-than-it-seems 43-22 Big Ten Championship Game loss to the Wolverines, and showed the public what Purdue folks have known for a very long time.

“I’ve always known what Aidan’s all about,” Purdue coach Jeff Brohm said after his team hung tough most of the game, only to get steamrolled late. “He’s always had strong faith, he’s a hard worker, he’s able to figure out what’s right and how to handle it, and of course, something like that happens, you want to be there for him. There’s not a lot you can do but support him. It’s tough, it’s tough; no one wants to see that happen to anybody. We knew what Aidan’s all about and I’m glad the whole country does now. Terrific young man, does everything right off the field — I can’t think of a bad thing to say about him. He’s a great teammate and he’s got a bright future.”

O’Connell, who led Purdue to its first back-to-back 8-win seasons since 1997-98, is a special athlete and a special young man who has left a legacy of excellence and toughness in West Lafayette. In a college sports world where players are running for the transfer portal the moment they smell adversity, O’Connell bided his time, developed and earned a spot as a worthy member of the Cradle of Quarterbacks. He leaves West Lafayette as the program’s leader in completion percentage and stands second only to Drew Brees in 300-, 400- and 500-yard games.

A week ago, he forced himself to play just days after terrible news and conceded he was in a bit of a fog that afternoon in Bloomington. He was in a somewhat better place emotionally Saturday night, but the pain still lingered — and will continue to do so.

“It’s been very difficult, as you would imagine,” O’Connell said in his first public comments since his brother’s passing. “You know, when you first hear news like that, it’s shock and denial and just a lot of emotions. So last week was tough. Going into the IU game, my head wasn’t really there, if I’m honest. The coaching staff was gracious enough to let me go home for a couple of days and spend some time with my family. I think that was much needed.

“I felt a lot better this week than I did last week, but it’s been a little crazy. It’s going to be good to get some time to relax and spend some more time with my family.”

Jones stood by O’Connell last week in Bloomington and continues to stand by his friend, who he’s known since the two started playing sports together in the third grade. O’Connell is the reason Jones transferred from Iowa, where he was largely a special teams player, to Purdue, where he’s gotten an opportunity to establish himself as one of the finest wide receivers in the nation.

“I think it just proves how tough he is,” Jones said of O’Connell. “Obviously, it’s super tough to get news like that, and with such a great family and to see him come out last week and want to be there with the team and help the team do something special is just amazing.

“And then on top of that, to play the way that he did, it just really shows the leader that he is and how much he means to this team.”

After the game, Michigan quarterback J.J. McCarthy and O’Connell met at midfield and embraced.

“Yeah, I shot him a DM earlier last week, just sending my love and prayers to him and his family,” McCarthy said. “…The kid is a fighter. He is a fighter, from (the moment) he stepped on campus.

“I was just so proud to see him go out there and do his thing and play the sports that he loves, and he didn’t shake one bit. I mean, that quarterback fraternity, especially us Illinois QBs, we stick together. We’re tight-knit. I love that guy. I truly do. I’m right beside him with everything he stands for, and I’m just really excited to see what he does with the rest of his career.”


Aidan O’Connell and J.J. McCarthy are both from Illinois and met at midfield after Michigan’s win in the Big Ten title game. (Robert Goddin / USA Toay)

For a half, the Boilers played the heavily-favored Wolverines off their feet. Purdue trailed just 14-13 and showed itself capable of moving the ball against the second-best defense in the country. Only two teams have exceeded 20 points against Michigan this year; now, make that three. Could this be another chapter in the Spoilermakers saga? Purdue has a history of knocking off behemoths, and in those 30 minutes, an upset seemed quite plausible.

But then the second half started, and everything changed. The Wolverines, who rushed for just 45 yards in the first half, came out of the gate with a 60-yard run by Donovan Edwards, followed by a touchdown shortly after. One possession later, another score. Two touchdowns in 4:28. The Boilers competed and continued moving the ball with alacrity, but they couldn’t finish drives. Field goals don’t beat the best team, or second-best team, in the country.

“You’ve got to play perfect to beat them,” O’Connell said.

Now the Boilers wait and find out where they’ll be playing their bowl game, but before that, take a moment to consider what this team accomplished after a shaky 1-2 start. We saw O’Connell do his thing. We saw Jones emerge as the conference’s leading pass receiver. We saw running back Devin Mockobee do things nobody could have imagined. And understand, all three were walk-ons at one point in their careers.

Brohn turned to Jones and O’Connell as they sat beside him on the interview podium.

“These two guys, in my opinion, exemplify what college football is all about,” he said. “Both those guys started at the bottom and they worked their way up and look where they’re at now. You have Aidan, who put on a tremendous passing performance … and of course, Charlie was fearless. Not only how he plays but also taking a chance, going from one school to the other just to go out and prove what exactly he can do.”

Purdue’s first-ever Big Ten title game appearance revealed so much, about the Boilers, who never stopped flailing away, and about O’Connell, who showed the country what emotional toughness looks like.

Denial of responsibility! Yours Bulletin is an automatic aggregator of the all world’s media. In each content, the hyperlink to the primary source is specified. All trademarks belong to their rightful owners, all materials to their authors. If you are the owner of the content and do not want us to publish your materials, please contact us by email – [email protected]. The content will be deleted within 24 hours.
college footballPurdue Boilermakers
0
Share