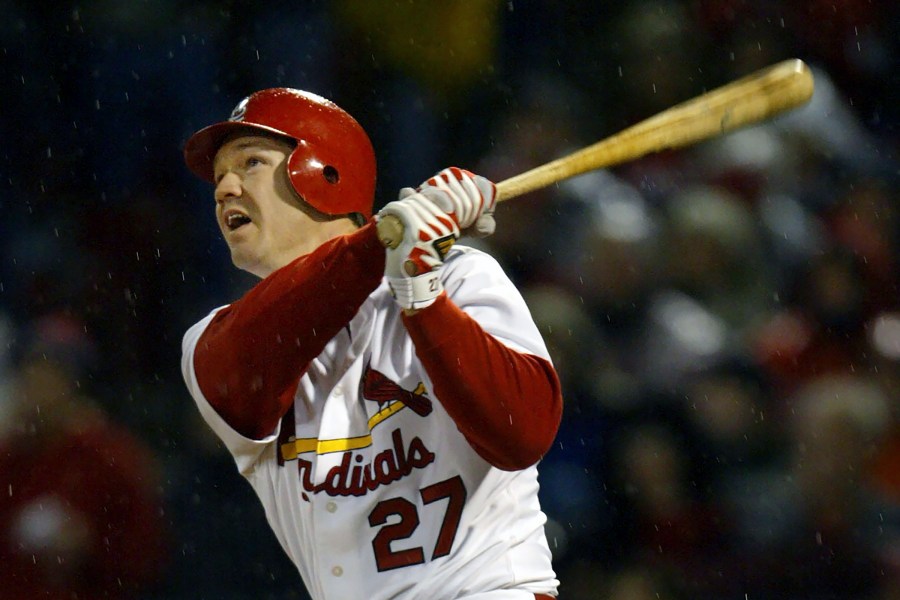 COOPERSTOWN, N.Y. – Scott Rolen, one of the most decorated third basemen of his era and a longtime St. Louis Cardinals catalyst, is officially Hall of Fame bound.

Voters have elected Rolen to the National Baseball Hall of Fame after his sixth go-around on the ballots. Rolen becomes just the 18th third baseman to earn a call to the hall, the fewest of any position.

Rolen offered top-notch production at the hot corner and in the batter’s box, notably beloved for his defensive abilities. He won eight Gold Glove awards in his 17-year career, including five consecutive NL titles from 2000-2004.

Rolen’s 21.4 dWAR (defensive wins above replacement rating) ranks among the Top 50 of MLB players all-time and Top 10 for primary third basemen. He also accrued 114 defensive runs saved since the metric’s inception in 2003 from his retirement in 2012, even while battling some long-term injuries.

“When I was in Colorado, they would tell me, ‘You got to see how he moves his feet,'” said Arenado during Winter Warm-Up. “The one thing I admire about Scott Rolen is that he’s so big. You don’t realize how big the man is until you get next to him. To be that good an agile, and have a great arm, it’s a hard thing to do. I was always impressed with that and how big he was, and he moves so well.”

In his prime, Rolen’s overall offensive numbers were just about as good as anybody in the league not named Barry Bonds or Albert Pujols. He slugged at least 25 home runs in seven consecutive seasons from 1998 to 2004, also averaging 103 RBIs and a .287/.380/.532 slashline during that timeframe.

Rolen’s 2004 season, which helped the Cardinals to an NL pennant, was undoubtedly his strongest. He reached career-highs in home runs (34), RBIs (124) and batting average (.314). He earned a fourth-place finish in MVP voting that season, just behind one teammate (Albert Pujols) and just ahead of another (Jim Edmonds). That year is commonly remembered as the MV3 year among Cardinals fans.

Bill DeWitt Jr., managing partner and chairman of the St. Louis Cardinals, says that 2004 season brought lots of excitement for the Cardinals. He adds that he hasn’t seen many third basemen perform to the level of Rolen and Arenado.

“That is pretty cool, the fact that we have both of those players,” recalled DeWitt. “Rolen had his best years here.”

Rolen delivered in some critical spots for the Cardinals in playoff action. In 2004, he hit .310 with three home runs in a seven-game NLCS round against the Houston Astros, including a late heroic tie-breaking home run against prolific pitcher Roger Clemens that sparked St. Louis to the World Series. Two years later, in his next Fall Classic opportunity, he hit .421 and built on several rallies to help St. Louis end a quarter-century drought without a World Series title.

Born and raised in Evansville, Indiana, Rolen grew up near Cardinals territory. He made his MLB debut with the Philadelphia Phillies in 1996 and earned NL Rookie of the Year the following year. The Cardinals acquired Rolen from the Phillies in July 2002 in a trade involving Placido Polanco, Mike Timlin and Bud Smith.

Rolen’s journey ended with a 70.1 WAR (tied for 103rd all-time) and seven All-Star nods. He spent his final five seasons between the Toronto Blue Jays and Cincinnati Reds. Rolen was named to the Cardinals Hall of Fame in 2019 and often attends Opening Day ceremonies at Busch Stadium with a red jacket.

For Arenado, there’s no debate on Rolen’s place in baseball history.

“I think he’s a Hall of Farmer. He deserves it,” said Arenado. “Scott’s one of the legends around here. He’s a Cardinal Hall of Famer for a reason. [I’m] trying to walk in those footsteps.”

Arenado’s former teammate in Colorado, Todd Helton, narrowly missed a Hall of Fame nod after five turns on the ballot.

MLB players with 10 years of service are eligible for the Hall of Fame as soon as five years after their retirement. A player is required to earn 75% of support, or usually 300-plus votes among qualified voters, to earn Hall of Fame status.

Former St. Louis Cardinals outfielder Carlos Beltrán fell short of a Hall of Fame induction in his first year of eligibility. Two other former Cardinals on the ballots, John Lackey and Jhonny Peralta, are no longer eligible after missing the minimum five-percent threshold to stay Hall-eligible.

Rolen and Fred McGriff (selected by a contemporary baseball committee), will be inducted into baseball’s Hall of Fame on July 23.

How to do the French capital like Emily in Paris