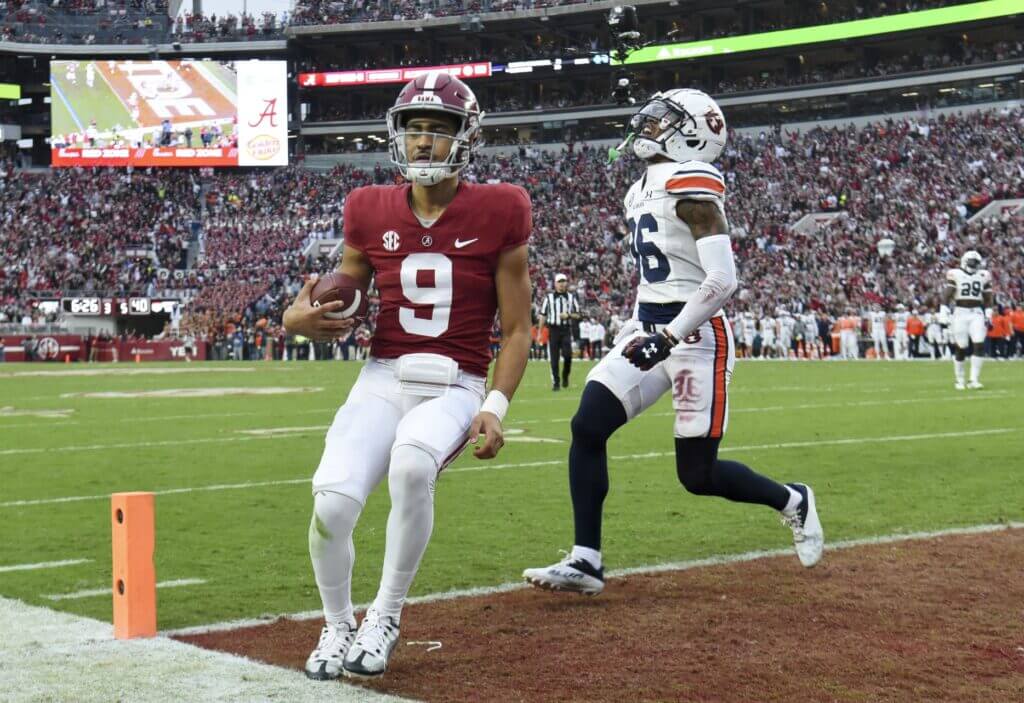 Start every morning with The Pulse in your inbox. Sign up here.

Good morning! Have we all calmed down from the USMNT game?

Before the season, the debate was already set: Bryce Young or C.J. Stroud? If Dane Brugler’s latest mock draft, out this morning, is any indication, Young’s the guy we’re seeing in a Texans uniform next year.

Interestingly enough, Stroud slid down the board a bit. The full list is worth an inspection, but I grabbed the top five for us:

If Young and Anderson go 1-2, it’ll be the first time since 2000 that the first two draft picks came from the same school. Courtney Brown and LaVar Arrington, both from Penn State, is your trivia answer there.

It’s worth remembering that, if this order holds, three of the top six picks will come via trade, maybe none more impactful than the first-rounder Philadelphia got from New Orleans in this year’s draft-day mega-trade. That pick sits at No. 6 right now, and the Eagles are 10-1.

So, can the USMNT really beat the Oranje?

The Americans survived a white-knuckling, pelvis-injuring affair against Iran yesterday to advance to the Round of 16 at the World Cup. It is a momentous achievement after missing the last World Cup entirely, and should scream optimism for the program’s future.

We’ll have plenty of time to fete the crew after the Cup is over. The focus is on Saturday at 10 a.m. ET, when the U.S. men’s national team plays the Netherlands. And yes, the Americans can win. It might be more feasible than you think, too.

The Dutch remain favorites, though, currently -250 at BetMGM. Most of our experts picked the Oranje, too. It will be fascinating to see how the odds shift as Saturday approaches.

Paul Tenorio and Sam Stejskal have a great retelling of maybe the most stressful nine minutes and 53 seconds in USMNT history. I’m still reeling from it a day later.

Christian Pulisic says he’ll be a go for Saturday, by the way, despite that “pelvic contusion” he endured to score the game-winner. Bless him.

UAB close to hiring Dilfer
It’s understandable to do a double-take on this one: UAB has targeted former NFL quarterback and current high school coach Trent Dilfer to be the school’s next head coach, sources told The Athletic late last night. Bryan Vincent has coached the Blazers with an interim title all season after longtime coach Bill Clark retired over the summer. Dilfer has been wildly successful at Lipscomb Academy in Nashville, where his team is currently 12-0 and playing for the state title tomorrow.

Tiger: Norman’s gotta go
Tiger Woods presented a united front with Rory McIlroy in a news conference yesterday, saying LIV Golf CEO Greg Norman “has to go” if the two entities have any chance of an amicable relationship going forward. They also need to settle that antitrust lawsuit, too.

It’s all on TCU and USC now

We have a new (and expected) top four in the College Football Playoff rankings:

This feels right for now. All four teams play this weekend and, depending on Nos. 3 and 4, could hold as the top four when the field is set Sunday. But if TCU or USC lose? The committee has a tough decision:

I guess you pick Ohio State? The Buckeyes have one loss to Alabama’s two, so I’m counting that as sound logic and moving on.

If USC and TCU both lose? Pray for our collective sanity, as the online CFP lobbying wars between coaches and fan bases will get hairy. Thankfully, David Ubben broke down each scenario here.

・Ken Rosenthal has another notebook of what he’s hearing on the MLB free-agent market, including the possibility of Wilson Contreras and the Astros finally getting together.

・Club soccer has no patience for the World Cup. There’s already plenty of chatter about where Pulisic will land in the January transfer window.

・The latest in our NHL99 series: Zdeno Chara, the tallest player in NHL history, who somehow got looked down upon early in his career.

・David Aldridge writes about Kristaps Porziņģis, who has become key to the Wizards’ success.

・Myles Turner is somehow staying focused despite being a walking 6-11 trade rumor. Law Murray caught up with the young center.

Denial of responsibility! Yours Bulletin is an automatic aggregator of the all world’s media. In each content, the hyperlink to the primary source is specified. All trademarks belong to their rightful owners, all materials to their authors. If you are the owner of the content and do not want us to publish your materials, please contact us by email – [email protected]. The content will be deleted within 24 hours.
carolina pantherschicago bearsDetroit Lionshouston texansNFLSeattle Seahawks
0
Share

Eastbourne ranks first in top 15 places to visit in the UK, followed by Birmingham and Cardigan, West Wales