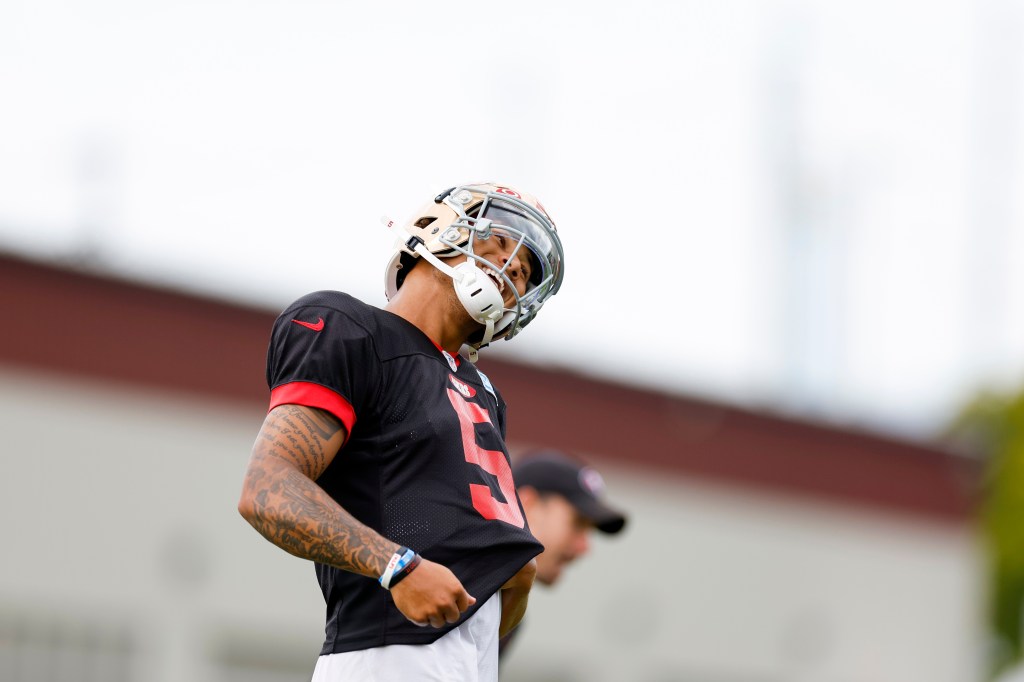 Training camp is almost over.

Yes, it seemed like the 49ers just started, but with preseason games starting next Friday, training camp — the daily grind of practices — is nearing a conclusion.

Meanwhile, I have come to some conclusions a bit before the finish.

Here’s what I’ve liked — and haven’t liked — from Santa Clara:

The 49ers’ offense is going to change with Lance at quarterback, right?

Of course it is. More running. More big plays down the field.

And on the latter, Aiyuk is looking as if he will be the biggest beneficiary.

So far in camp, he’s been going full Stretch Armstrong — using his comically long arms to snag everything and anything coming from Niners quarterbacks.

There is a trust developing between him and Lance, whose accuracy leaves something to be desired but the problems of which are mitigated by, again, those long arms of Aiyuk and the receivers’ sense of fearlessness.

The ultimate sign of respect to Aiyuk: Fred Warner — who is an absolute maniac in practices — is challenging the wide receiver to the point that the two fought, twice, at practice earlier this week.

Last season, Deebo Samuel was an All-Pro. Aiyuk looks as if he has that same potential this season. The joint practices in Minnesota next week will tell us if this early surge has staying power.

The outside corner combination of Charvarius Ward and Emmanuel Moseley has been exceptional in camp. I expect that form to continue for the full season.

Ward is as good a press cornerback as I have seen in my days covering football and he seems to see the game in slow-motion.

Moseley remains the most athletic player on a field full of super-athletes. His skill set has also shown clear refinement from prior seasons.

There were question marks at nickel back and strong safety, though. I have seen no issues at either spot.

Darqueze Dennard and Dontae Johnson have been stout in the slot. I see no reason to worry about either in coverage. We’ll see how they are in the run game soon enough.

The same goes for Talanoa Hufanga, who has been rock-solid in coverage and we know will be valuable in the run game.

This secondary has a chance to be elite.

With an elite core of linebackers and a defensive line that has the same potential, you can deduce the possibilities with this defense.

Like: Spencer Burford making the most of his opportunity

It might just be a tease, but the 49ers have given the rookie out of Texas-San Antonio a full run at right guard, a position where they desperately needed someone to step up in training camp.

I think Burford has done it.

He’s strong, moves well, has been solid in pass protection, and the right side of the Niners’ line looks impressive in the run game.

It’s fair to note that the fourth-round draft pick has not faced the Niners’ best defensive tackles in the early days of camp, but every time you think Burford is going to slip — that he’s going to look overmatched — he’s held his ground.

Training camp is not the best environment to make offensive line claims, but I would have no problem with Burford starting at right guard in Week 1. I’d rate center, left guard, and even right tackle (with the returning Mike McGlinchey) as higher concerns than Burford at the moment.

The first-year starter has been… fine.

Especially when you consider his crisp, in-control practice on Friday.

There have been as many downs as ups for Lance at the first start of camp, and while there are a multitude of reasons that can be blamed for that, the quarterback himself cannot be fully exonerated.

Is it too much to want to have seen more by now? To want to be more inspired by his practices?

Sure, I’ve set a high bar for the Uber-talented Lance. Does him not reaching it so far make me a “hater”?

It has been waning, and Lance seems more accurate when wearing shoulder pads.

That’s fascinating, at least to me. I went through my notes from last year’s camp, and I don’t see anything like that in there.

A few things to note in Lance’s favor: the 49ers’ defense is very good, and Kyle Shanahan’s play calling has been milquetoast. It’s not as if Lance fails to throw to wide-open players downfield. No, the errors are forced throws, something I imagine coaches are encouraging him to do at this early stage in camp.

Two other things: Lance’s running ability hasn’t been put on full display just yet. The Niners have not truly gone “11-on-11” at camp. That’ll be a huge part of San Francisco’s offense this season — an offense I don’t think will be truly installed while the media is allowed to see practices.

But still, is it too much to want to see just one practice where Lance flashes that elite-level talent while also not making an equal amount of mistakes? That’s what we’ve seen so far during camp.

The 49ers are easing Kinlaw back into practices, and he seems keen to ease into the fold.

When Kinlaw is on the field, his reps have been underwhelming. But he’s not on the field often.

I’m not sure how the Niners can feel comfortable with Kinlaw — a vital player on their defense this season as their one true one-technique — given what we’ve seen so far in his career and in camp.

If he’s to reach his potential, things will need to ramp up prodigiously in the coming weeks.

It’s early yet, but right now, he doesn’t appear to be a player who will have his fifth-year option picked up at the end of the season. So whatever you do, don’t look up how the 49ers acquired him.

The Niners keep trying it, and Brunskill keeps telling them with his play that he is not up for that job.

Jake Brendel has been sold at center so far in camp. It’s not ideal, but the Niners can run him out there in Week 1 with some confidence.

Brunskill’s snaps and pass protection have been so poor during camp that if he is given the job at the start of the season, Brendel will have the job not long after.

Perhaps Brunskill is slated to start at right guard instead of Burford. That feels like a mistake, but it’s early in camp.

The best role for Brunskill would be as a do-it-all No. 6 offensive lineman. The big man has put in good shifts for years, but we consider such a demotion a sign of progress on the line.

Chipotle’s New Scented Candle Is a Nod to…