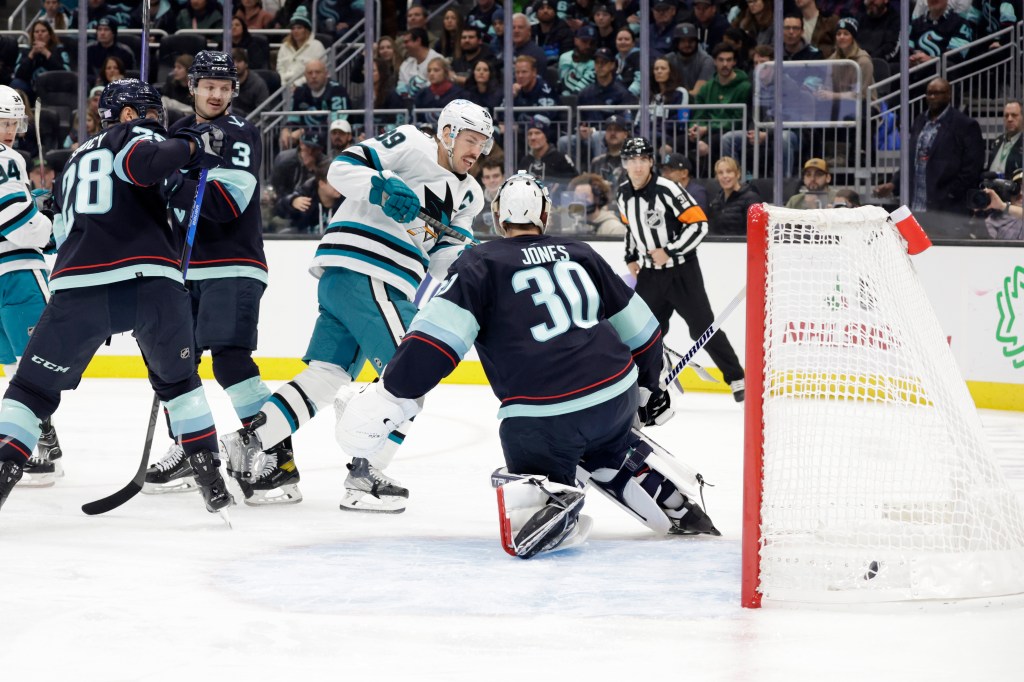 Timo Meier scored the fourth hat trick of his NHL career but the San Jose Sharks couldn’t overcome their own mistakes or slow down the Seattle Kraken, who scored two goals less than a minute apart early in the third period to help earn an 8-5 win on Wednesday at Climate Pledge Arena.

With the game tied 4-4 after an Alexander Baranbanov goal one minute into the third period, Oliver Bjorkstrand and Jaden Schwartz scored goals 59 seconds apart to give the Kraken a 6-4 lead.

Schwartz’s goal, which came on an odd-man rush at the 3:47 mark of the third period, proved to be the game-winner as the Kraken handed the Sharks their third loss in the last four games.

The Sharks now have a 1-4-0 overall record against the Kraken, which came into the NHL last season. They’re also 0-3-0 in Seattle.

“We just gave up too much,” said Meier, who is now tied for eighth in the NHL with 12 goals. “We were turning too many pucks over. I thought we had part of the games where we played well, but it was just not consistent for 60 minutes. That was a winnable game and we shot ourselves in the foot, mistakes that cost us the game.”

Meier, with goals in both the first and second periods, completed the hat trick as he tapped in a pass from Kevin Labanc at the 8:58 mark of the third period to cut Seattle’s lead to 6-5.

But the Kraken got that goal back as Matty Beniers beat goalie Kaapo Kahkonen on an odd-man rush for his sixth goal of the season with 4:44 left in regulation time.

“I don’t know whether we felt really good about what happened the other night or what,” Sharks coach David Quinn said. “I didn’t love our practice (Tuesday), either, and I think it carried over to tonight.”

Kahkonen, making his second straight start after he made 37 saves in the Sharks’ 5-1 win over Ottawa on Monday, allowed seven goals on 26 shots. But Kahkonen could hardly be faulted on a number of them, as turnovers and mistakes fueled Seattle’s transition game.

“He made some saves early in the second when I thought we were really on our heels,” Quinn said of Kahkonen. “Crazy as it sounds, he gave us a chance to get back in it, then we tie it early in the third and feel really good about the energy on the bench and what we’re doing.

“Then just turnovers in the offensive zone. We need to continue to learn that every time you have a puck on your stick, you don’t have to force the play. Just play hockey. When we do that, we’re a very good team. I really do believe we’re a good hockey team when we do that.”

Logan Couture had a goal and an assist and Tomas Hertl added two assists for the Sharks, who now return home for two games, as they play the Los Angeles Kings on Friday and the Vancouver Canucks on Sunday.

Per NHL Stats, going back to the 2005-06 season, 76.3 percent of the teams that were in a playoff position on U.S. Thanksgiving made the playoffs.

Meier scored a power-play goal off a nifty assist from Erik Karlsson at the 18:53 mark of the first period, giving the Sharks a 2-1 lead. Karlsson now has 30 points this season, as he became the 11th defenseman in NHL history to record 30 points in 22 games or fewer.

But the Kraken elevated its play in the second, as Vince Dunn, Ryan Donato and Jamie Oleksiak all scored even-strength goals past Kahkonen to give Seattle a 4-2 lead.

“The first couple of goals, we had covereage, we had numbers and we just didn’t communicate,” Sharks defenseman Jaycob Megna said. “Then obviously as the game went on, we just stopped coming back and stopped working for each other.

“They had four-on-twos, three-on-twos all night, and it’s tough to ask our goalie to stand in there and stop those.”

Meier scored his second of the game and his 11th of the season with 6:21 to go into the second.

After Andre Burakovsky tied the game 1-1 at the 9:44 mark of the first on a Kraken two-man advantage, the Sharks scored a power-play goal of their own.

After the Sharks snapped it around on a 4-on-3, Karlsson took a pass from Couture and sent the puck cross-ice to Meier, who one-timed it past Jones for a 2-1 Sharks lead.

Justin Fields is inactive for Chicago Bears, so Trevor Siemian will start at QB vs.…

Cody Gakpo on transfer links: ‘I’m focused on World Cup — but anything possible’

Feast and famine for Disney at Thanksgiving box…