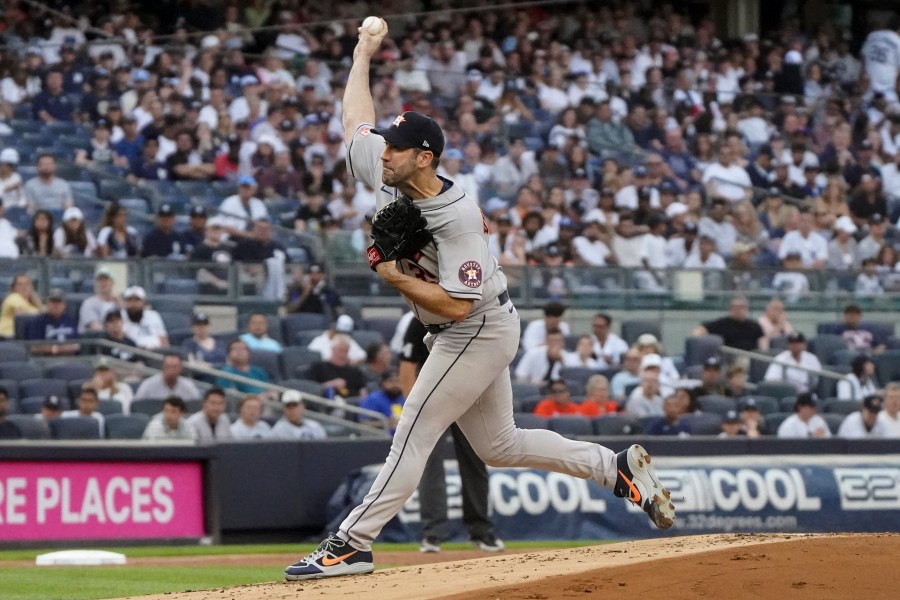 NEW YORK (AP) — Justin Verlander was amped up, throwing nine of his 20 fastest pitches this season.

“Maybe it was the adrenaline,” he said.

Exactly what the Astros needed, given their worn-down bullpen after Thursday’s late meltdown in the series-opening 7-6 loss. Asked during batting practice how he would navigate through his relievers, Astros manager Dusty Baker quipped: “My navigation system is Verlander.”

With wife Kate Upton watching from a first-row seat behind the plate in the Yankees’ season-high crowd of 47,528, Verlander (9-3) averaged 95.5 mph with his fastball, up from 94.8 mph coming in. The 39-year-old right-hander, a two-time Cy Young Award winner, struck out three and walked one, lowering his ERA to 2.22.

“That’s why he’s going to be a first-ballot Hall of Famer,” Yankees slugger Aaron Judge said after going 0 for 3 against Verlander. “He continues to bring it every single start.”

“I thought the fastball was really good,” he said. “I thought the slider was kind of hit and miss, and the curveball got me some big outs when I needed it.”

New York (52-19), which lost for just the fourth time in its last 23 games overall, got its run on a fastball in the sixth. Giancarlo Stanton hit an opposite-field drive into the right field second deck for the second night in a row, his 16th home run this season.

Phil Maton pitched out of trouble in the eighth, striking out Judge on a curveball with one on, and Stanton and Josh Donaldson, both on sliders, to strand two runners.

Rafael Montero, pitching for a third straight day for the first time this season, walked Aaron Hicks with one out and pinch-hitter Matt Carpenter with two outs. Montero retired DJ LeMahieu on a groundout for his fifth save.

“Against a team like this and against a pitcher like Verlander,” Severino said, “you have to minimize those mistakes.”

Tucker’s home run was his 14th.

Judge agreed to a $19 million, one-year contract with the Yankees that avoided an arbitration hearing.

Donaldson got into a verbal confrontation with another opponent after he didn’t run hard out of the box on his second-inning double that hopped the right-center wall and flipped his bat into catcher Jason Castro. At the end of the inning, Donaldson cupped a hand to an ear while looking at the Astros dugout, then shrugged shoulders.

Donaldson referred to White Sox star Tim Anderson as “Jackie” on May 21 — a reference to Jackie Robinson — earning the third baseman a one-game suspension.

Hicks, moved to left field from center for much of this season, sprinted 66 feet to make a leaping, sprawling backhand catch in the left-field corner to rob Jose Altuve of an extra-base hit leading off the fourth. In the middle of the infield, Severino raised both arms and screamed.

Jake Meyers started in center and went 0 for 3 with three strikeouts from the No. 9 slot in his first major league action since Game 4 of last year’s AL Division Series against the Chicago White Sox, when he injured his left shoulder Meyers hit .250 with three homers and four RBIs during a 14-game injury rehabilitation assignment at Triple-A Sugar Land.

Yankees: LHP Aroldis Chapman (left Achilles tendinitis) struck out one in an eight-pitch seventh inning for Double-A Somerset, his first game action since May 22.

RHP Gerritt Cole (6-1, 3.14) starts for the Yankees on Saturday after taking a no-hit bid into the eighth inning at Tampa Bay. RHP Cristian Javier (4-3, 3.07) starts for the Astros.

How the House Jan. 6 Panel Has Redefined the Congressional Hearing