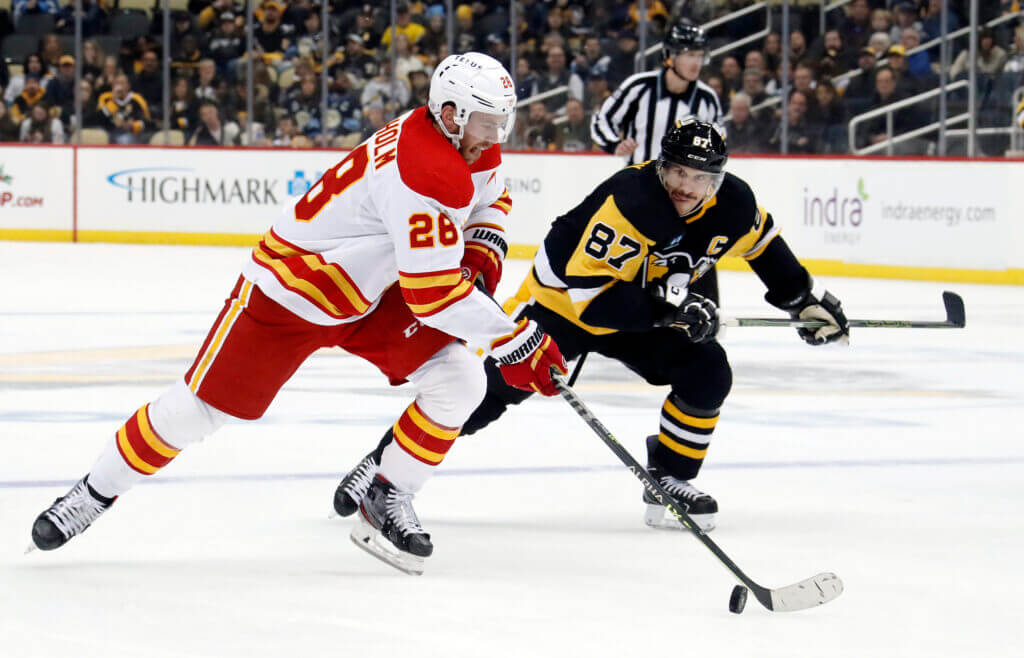 In September, it was a little surprising to hear Flames GM Brad Treliving say that the team’s goal was to make the playoffs.

At the time, we deduced it was a way for Treliving to manage heightened expectations after a splashy offseason. Since then, head coach Darryl Sutter has reiterated those same ambitions for his club. Considering how the Flames have played to this point, not leaning into the preseason hype that was put upon them has proved to be a sage approach.

It won’t stop some people from wondering about the Flames and whether or not they really are Stanley Cup contenders. But at least you can’t accuse Treliving or Sutter of overselling.

Following a 2-1 shootout loss to Pittsburgh on Wednesday night, the Flames are in the first of two wild-card playoff spots on the morning of American Thanksgiving, an unofficial marker of sorts for NHL teams in determining whether or not they’ll make the playoffs. There are, of course, anomalies like the St. Louis Blues who had a losing record at Thanksgiving in 2018 and were dead last to start the 2019 calendar year before winning the Cup that summer. Last season, the Colorado Avalanche occupied the second wild-card spot after starting the year slowly, riddled with injuries and COVID-19 cases, before winning it all.

So far, the Flames haven’t reached the highs of last year’s team. They’ve accumulated 21 points, eight fewer than they did last year while also earning three fewer wins. The Flames also have a goal differential of minus-3 (one of five teams currently in, or tied, for a playoff position with a negative goal differential), and don’t have the same offensive quality that they boasted last year on their top line.

Goaltenders Jacob Markstrom and Daniel Vladar are each coming off solid performances, but their statistics leave much to be desired. Markstrom’s save percentage is .889 with a 3.03 goals-against average and is tied for the fourth-most goals allowed by a goalie who has played a minimum of four games this season. Vladar’s numbers are only slightly better in fewer games.

Despite those negatives, this team has still earned the benefit of the doubt when it comes to their postseason chances. MoneyPuck has the Flames with the sixth-best chances of making the playoffs — the best of any team currently in a wild-card spot — and the eighth-best chances at winning the Stanley Cup. Here’s a deeper look at why the Flames should still be looked at as a playoff team with aspirations beyond their current place in the standings.

It was the case when the season began and an uneven start hasn’t changed that: the Flames still have a playoff-worthy roster. Centre depth is heralded as a necessity for playoff teams and their top three centres in Elias Lindholm, Nazem Kadri and Mikael Backlund are more than suitable for that. The Flames’ defensive depth has been tested early with injuries but still has solid options in Rasmus Andersson, Noah Hanifin, MacKenzie Weegar and Nikita Zadorov, who has drawn rave reviews from Sutter. Markstrom and Vladar need to be better, but they’ve also had moments where they’ve shown that they can be. Jonathan Huberdeau might not be playing on a top line presently, but he’s still an elite forward who helps make the forward core look formidable.

Markstrom, in particular, has made some quality saves in key moments despite not having the best numbers. There’s still time for him to regain the form that made him a Vezina finalist last season.

Jacob Markstrom just made the save of the year so far! Wow! pic.twitter.com/BUsdJuXoTB

Games, series and the Stanley Cup aren’t won on paper. But the Flames still look like a team that could make people believe they can win in the playoffs.

The Flames didn’t have a losing streak longer than four games last season. According to ManGamesLost, the 2021-22 Flames suffered the fewest man-games lost with 92. Things went well for them until they ran into a second-round buzzsaw against the Oilers. In that series, Chris Tanev got hurt, Markstrom’s goaltending wasn’t up to par and the Oilers outscored their own problems en route to a series win.

This year’s Flames team is overcoming significant roster changes and the struggles of establishing chemistry. Calgary has had its depth tested and called upon previously scratched players like Adam Ruzicka and call-ups like Dennis Gilbert. Let’s not forget the seven-game winless streak where the Flames blew leads and struggled against faster, younger teams, and went through a handful of teams in the Eastern Conference after spending most of the first month of the season at home.

All the while, there was no rush to press the panic button.

The Flames still need to improve in certain areas, but they have a roster that understands that regular seasons have their ebbs and flows. When asked about how the team has handled the early-season roller coaster after the Flames’ win over the Panthers last weekend, Weegar lauded the “character group” of players from the leadership core and beyond.

“It’s not like we’ve been playing bad. Every game’s been close,” Weegar said. “Now, things are, hopefully, starting to click and get some bounces to come our way.”

Weegar is still looking for his first goal with the Flames and only has five assists, but has otherwise been just fine playing on the second defence pair, whether with Tanev or Zadorov. Huberdeau has looked more like an engaged and productive player lately, but we didn’t expect it to come playing alongside Backlund and Blake Coleman. Kadri has been quiet over the last three games, but he got off to a great start and there have been otherwise no real issues about his placement in the lineup.

It might not be at the level that some might want just yet, but the Flames’ new players certainly aren’t dragging the team down. As long as they’re not liabilities, the Flames can still be patient as they continue to settle in and adjust to Sutter’s system.

Other teams are still figuring it out

Not sure if you’ve noticed, but teams have been all over the place when it comes to streaking. The New Jersey Devils, whose fans booed coach Lindy Ruff at the start of the season, just had a 13-game winning streak snapped. The St. Louis Blues were seemingly already done for when they were on an eight-game losing streak. They are currently in the second wild-card spot in the Western Conference, tied with Minnesota, Edmonton and Nashville.

While there is always room for a team like Seattle to continue playing above expectations and secure a playoff spot, the Flames are in a similar spot with a handful of teams with the potential to break out.

Denial of responsibility! Yours Bulletin is an automatic aggregator of the all world’s media. In each content, the hyperlink to the primary source is specified. All trademarks belong to their rightful owners, all materials to their authors. If you are the owner of the content and do not want us to publish your materials, please contact us by email – [email protected]. The content will be deleted within 24 hours.
calgary flames
0
Share

Bank of America CEO Brian Moynihan on how he plans…

How to charge Beats Studio Buds