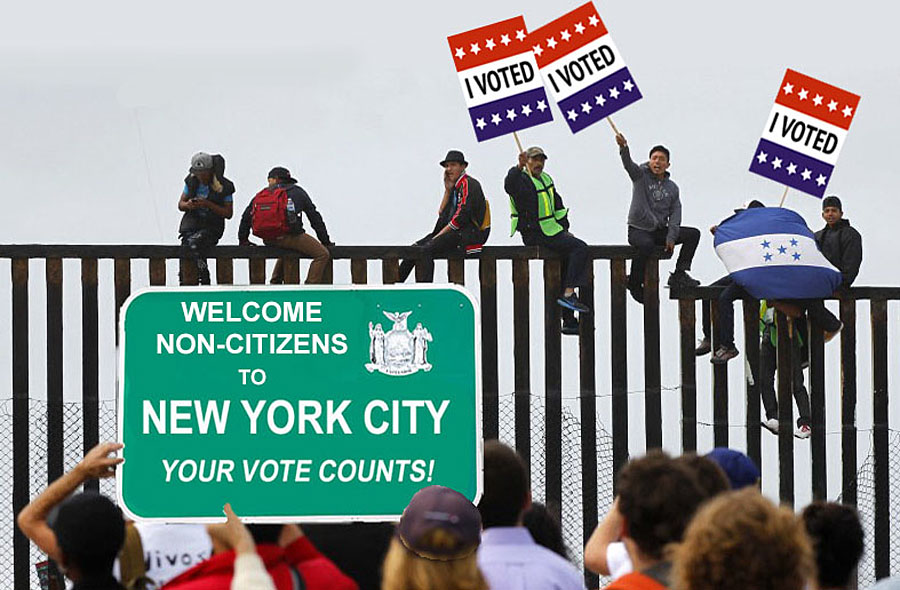 QUEENS COUNTY, NY – Citizenship is the bedrock foundation of American civilization, but not to New York City’s newly elected mayor, Eric Adams, and the New York City Council. Currently there is a bill in committee hearings before the City Council which would give non-citizens the right to vote in municipal elections.

This bill, Intro #1867, was introduced by Councilman Ydanis Rodriguez who said:

“If people have a problem with this, then they should move to another town or another country that has not been built by immigrants.”

The bill has the support of a majority of 34 out of 51 Council members, but outgoing Mayor de Blasio signaled he might veto the bill if it comes across his desk. So, the Council may very well wait until after January 1st when Mayor Adams takes office. Adams fully supports the bill and testified before the Council, saying

“I urge you to pass Intro #1867 to give all New Yorkers a voice in the greatest city in the world.”

The passage of this legislation would add nearly one million non-citizens to the voter rolls allowing them to vote and enroll in a political party. Their votes will go largely to Democrats, leading to a permanent one-party monopoly ruling New York City.

Sensible voters throughout New York State soundly defeated ballot propositions 1, 3 and 4 in the November election, sending a strong message to safeguard election integrity. The same effort is needed to defeat this abominable non-citizen voting rights bill. NYC is the epicenter of the battle to combat the forces of the globalists and progressives who want to destroy America, undermine citizenship, establish a one-world government, and give the power to the Chinese Communist Party (CCP). Non-citizen voting is a key weapon in the globalist’s anti-American arsenal.

In the New York Times op-ed, “The Cosmopolites: The Coming of the Global Citizen” the writer advocates “abolishing borders and transforming all human beings into citizens of the world.” Ending citizenship is the final blow to eradicate Western Civilization.

The concept of citizenship began with the Greek city-state, or polis. Being a citizen of Athens, Sparta, Corinth, Thebes or 1000 other self-governing polis, meant you had certain rights and responsibilities. In the schools of ancient Greece and Rome, citizens were diligently taught their basic rights and responsibilities. Citizens were given the right to vote, were expected to take an active role in the political arena and their local governments, and to reason, discuss and debate the issues and make laws. Citizens also enjoyed the privilege of land ownership and were expected to fight in defense of the polis. This was the foundation of Western Civilization.

Citizenship means assimilating into the existing culture and understanding why America is “an enduring beacon of liberty for the world.” It means studying and working hard, learning our history, our rules, our US Constitution, Bill of Rights, Declaration of Independence, and understanding our rights and responsibilities. It means understanding the local issues and who represents us on a city, state, and national level, and getting out to vote. Citizenship means working together for the common good.

Citizenship is now under attack. Elected officials in the NYC Council are now targeting your voting system. These elected officials are not alone. The fake media, such as the New York Times published recent opinion pieces such as: “There Is No Good Reason You Should Have to Be a Citizen to Vote” and “The Minimum Voting Age Should Be Zero.”   The progressive globalists don’t want people to think, they want kids to vote, they want “all New Yorkers” to vote, even non-citizens. “Every vote will be counted” is code for suppressing citizen’s votes. It really means every non-citizen’s vote will be counted. It means fraudulent votes will be counted. In the former Soviet Union, 100% of the people voted for Stalin. Having everyone vote doesn’t mean you’re living in a democracy. Election integrity means United States citizens have the right to vote. Now they aim to destroy citizenship through non-citizen voting laws.

We must defeat New York City Council Intro #1867. Contact your local City Council members and all elected officials. Call, visit, and write to them about the true meaning of citizenship and demand that they vote ‘no’ on this bill. Proud new Republicans were elected to the New York City Council who promise to be our powerful voices to stop this bill and other non-citizen voting measures. This is a call to action for all of us. It’s the fight of our lives to safeguard American citizenship and save Western Civilization.

Nicky Henderson can’t bury his head in the sand