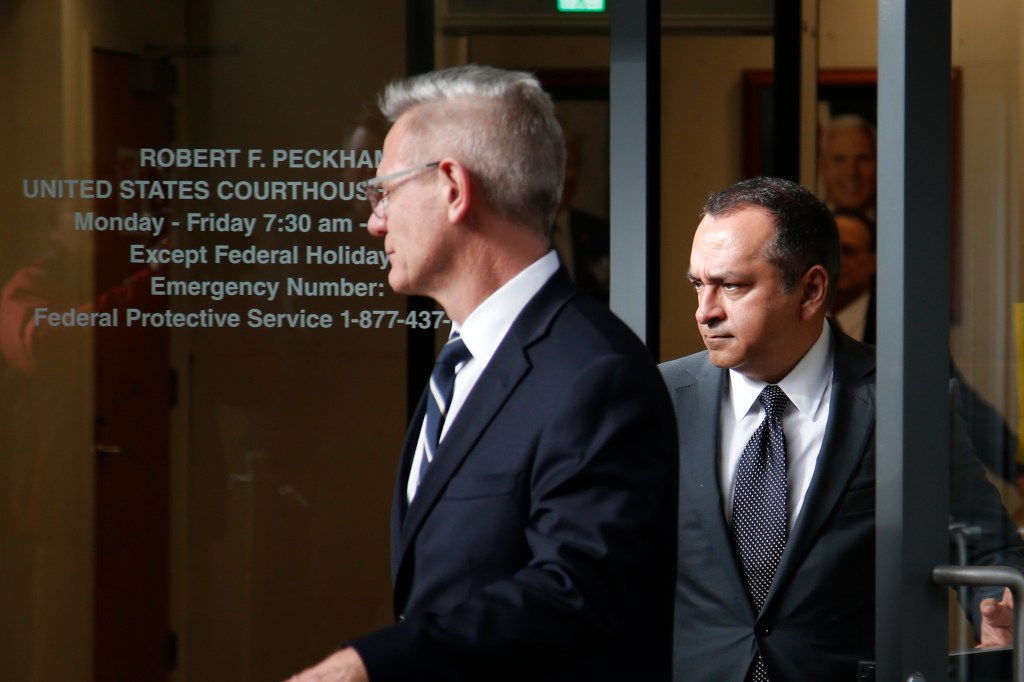 In a strong signal that Theranos founder Elizabeth Holmes will seek to blame her co-accused and ex-lover Sunny Balwani for alleged fraud at her failed startup Theranos, the defense team has asked the judge in her trial to let them put statements previously made by Balwani before the jury.

In a a motion filed this week, Holmes’ attorneys said that they had sought to call Balwani — the former Theranos president whom she has alleged in court filings coerced, controlled and abused her in ways that affect the issue of guilt — to testify at her trial, but his lawyer said that if called, he would invoke the Fifth Amendment, refusing to testify to protect against self-incrimination. A lawyer for Balwani did not immediately respond to a request for comment.

In lieu of Balwani’s testimony, Holmes’ lawyers are seeking to introduce three depositions Balwani gave to the U.S. Securities and Exchange Commission, which the motion claims will illustrate details about Balwani’s “management of certain aspects of Theranos’ operations,” including laboratory oversight and relationships with drugstore chain Walgreens and grocery chain Safeway, as well as Theranos’ financial model.

The motion is the clearest indication yet that Holmes’ legal team plans to pursue a line of defense outlined in court documents before the trial: That she was in an “an abusive intimate-partner relationship” with Balwani, in which he exercised psychological and emotional control over her. Though Holmes has taken the witness stand for three days of testimony in her own defense, prosecutors have yet to bring up her relationship with the former Theranos president.

The pre-trial court documents claimed that the “pattern of abuse and coercive control continued … during the period of the charged conspiracies,” and referred to alleged sexual abuse by Balwani, as well as allegations that he disparaged Holmes, “withdrew affection if she displeased him,” and controlled what she ate, how she dressed, how much money she spent and whom she interacted with, “erasing her capacity” for decision making. The filings also claim Balwani monitored Holmes’ movements, calls, text messages and emails; committed “physical violence” such as throwing hard, sharp objects at her; and restricted her sleep.

The pre-trial filings suggested the defense planned to introduce testimony from a psychologist specializing in relationship violence who has examined Holmes, and referred to the “potentially debilitating” symptoms of post-traumatic stress disorder that Holmes suffers from as a result of the relationship.

Both Holmes and Balwani are both charged with fraud in connection with Theranos, which Holmes founded in 2003 as a Stanford University dropout. The government claims “many hundreds” of patients were defrauded by the Palo Alto startup, and that investors were bilked out of more than $700 million. Holmes and Balwani have denied the allegations.

Balwani’s name has come up frequently in Holmes’ criminal trial. Prosecutors claim that both she and Balwani knew Theranos’ blood-testing technology was unreliable, inaccurate and could conduct only a limited number of tests, despite their public claims that the company’s machines could conduct a full range of tests on just a few drops of blood from a finger-stick.

Proseuctors have also introduced text messages between Holmes and Balwani in 2015, that include her referring to him as, “My water. And ocean,” and saying, “Madly in love with you and your strength.”

The documents Holmes’ lawyers are now seeking to introduce into the trial are three depositions Balwani made to the SEC in August and September of 2017. In the statements, Balwani appears to take ownership over key areas of Theranos’ operations central to the prosecution’s fraud case, and suggests Holmes may have had limited knowledge of those areas.

In the statements filed with the motion, Balwani takes responsibility for managing Theranos’ lab operations, as well as for taking over “the leadership role” in Theranos’ failed partnerships with Walgreens and Safeway, and for building the “financial model” for Theranos — though he made distinction between that model and revenue projections, one set of which jurors have heard missed their targets by hundreds of millions of dollars.

In one statement, Balwani claims Holmes knew he had created a financial model for Theranos, but although she was “generally familiar” with the information he used for it, she might not have known about most or all of it. On the issue of the “null protocol” for demonstrations of the company’s blood testing machine, which jurors heard could hide errors in the company’s testing technology, Balwani told the SEC it was a “deep software concept” that he never discussed with Holmes.

Holmes is facing maximum penalties of 20 years in prison and a $2.75 million fine if convicted, plus possible restitution, the Department of Justice has said.

How Yeti is marketing like a DTC brand on social…

Apple’s AirTag lawsuit could be a bigger…