The startling power of my “sweet” white lady voice. 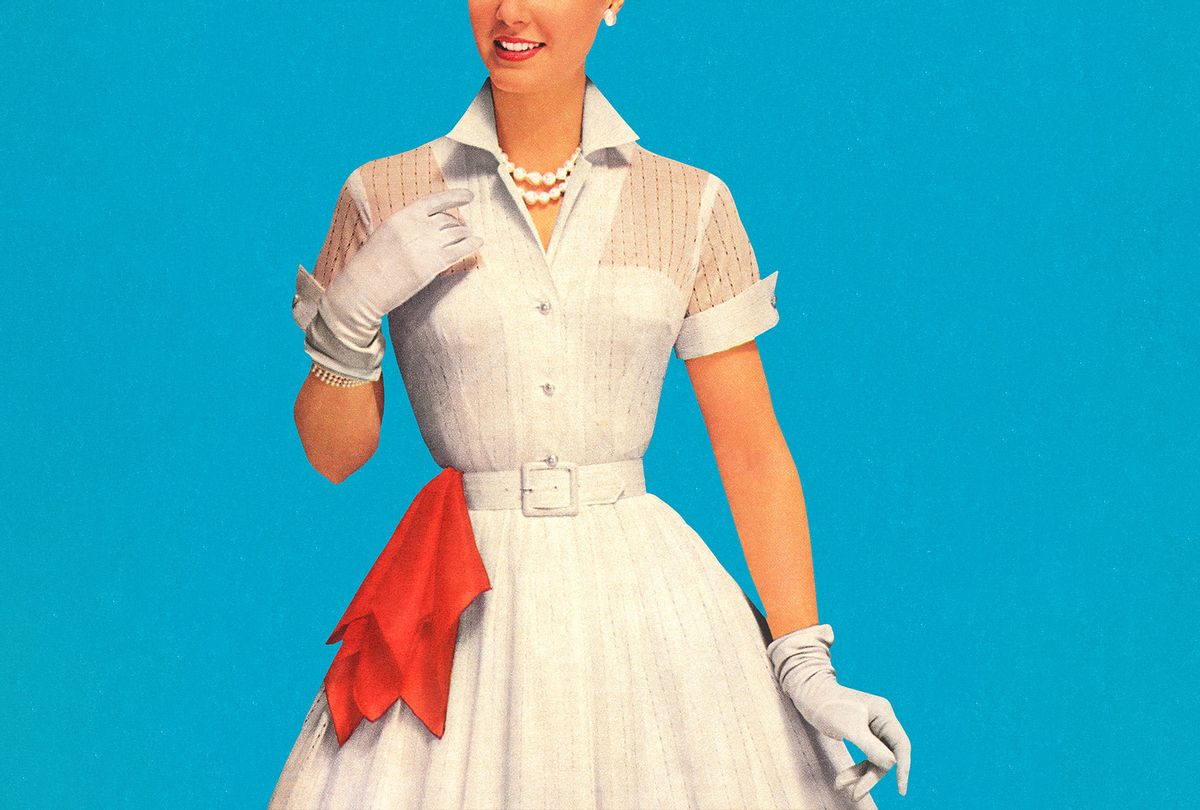 “I’ve never heard you use that voice,” he said, slumping into a chair in my office.

Wringing my hands distractedly, I asked, “What voice?”

“The voice you just used with that cop. You sounded … different.”

“What? I was just nervous.”

“You sounded cool as fuck. Excuse my language. I don’t think it was nerves.”

I checked the hallway to see if any other students were coming in. No one was out there so I closed the door and tried to concentrate on what Jamal was saying.

“Are you OK?” I asked. Even in my nervousness, I knew to only ask this question of a boy when he was alone. Years ago, I asked a male student if he needed help carrying a large box of lunches out of a restaurant and John, a teacher at the school, had given me a look that said, don’t do that. Everything about these boys is tough and the last thing they want their peers to see is them asking me, a white lady, for help.

“Tell me what happened. Did he have you out there for a long time? How did it all start?”

Every day since becoming principal at Austin Alternative, I would park on this quiet side street and make my way toward’s the front door of the school on Chicago’s West Side. I noticed the police officer first, pacing back and forth on the edge of the sidewalk closest to the street. The cop was white, like me. He was wearing his navy police uniform complete with a bullet proof vest and black steel toed shoes. Then I saw five Black teenagers, all boys, lined up against the wall, hands against the bricks.

“We’re not going anywhere until someone tells me about the shots fired down the block!” the cop barked.

Silence. I kept walking towards the scene. I recognized Jamal and Terrell (not their real names), two of my seniors, ready to graduate if they passed all their classes at the end of the year. Two more looked young enough to be high school students, but were not enrolled at our school. I know all 150 kids that attend Austin. And the last in line, on second look, was a man, older than the rest, wearing a mis-buttoned flannel shirt and no coat.

“I know you know what happened, and I’m sure it involved one of your friends,” the police officer said. “Just give me something to go on and you can all go.”

The young man at the end of the line started mumbling. “C’mon, man,” was all I could hear. Then he took his hands off the wall and started to turn around, likely tired of standing there, tired of being yelled at, just tired.

The officer took out his baton.

I stopped abruptly. The officer hadn’t seen me yet.

Over the ten years I had worked on the West Side, I had seen my students undergo a number of humiliating and frightening encounters with cops, from being patted down to being put in the backseat of a police car. I had not seen any physical police violence firsthand, but this scene I walked into felt particularly volatile. I needed to do something.

At work, I knew exactly how to speak up to diffuse a situation. If I saw a conflict between two students getting heated and their voices escalating, I would ask in a serious tone and slightly louder voice, “What’s going on here?” I would also try to give some instructions for them to follow, “Walk away now.” Sometimes these statements were enough to break the tension between the students. Sometimes they were too locked into their argument to hear me. Inside the building, we all knew each other and spent time building rapport and trust. When I had to use a louder, lower voice, students knew I was concerned. My “principal voice” would get me nowhere in this situation, I realized.

Police had come into the school over the years, looking for students usually. Because of my upbringing, I was always respectful and cooperative. Because of my whiteness, I didn’t have negative interactions with police. But since being at the school, I had heard students talk about police shaking them down and taking cash they had on them, pulling them over for no reason, or not arriving at all after calling 911. I heard too many stories to dismiss them as exaggerations.

My conversations with the police inside the school were usually pretty brief. Those few encounters had shown me a pattern of behavior. Police walked and spoke projecting authority, their hands on their utility belts or their thumbs tucked into their vests at their shoulders. They questioned me repeatedly if a student wasn’t there, as if they didn’t believe me. They left reluctantly if they didn’t get what they had come for — the student or information — sometimes hanging around outside and then coming back into the building to ask the same questions again.

I wasn’t going to out-yell the cop. I had no authority over anything out here in the street. I knew he was in charge of this situation no matter what. But I couldn’t just walk by or turn away.

My feet moved forward without knowing what was coming next.

“Good morning!” I said, my voice as light and sweet as whipped cream frosting. “How are you today, officer?”

I didn’t wait for an answer. Words flowed out of my mouth like an open fire hydrant. “Jamal and Terrell, I know you were coming to school early to help with distributing the new books. The teachers really appreciate the help and it will save so much time.”

One breath. Then the rush of words kept coming.

“And we can look over your financial aid applications. I know you started, right, with Ms. Washington? I think you guys are in really good shape because you have your parents’ information already entered….”

My voice trailed off as I stopped in front of the officer, who — along with Jamal and the two kids I didn’t know — just stared at me. Terrell and the young man with no coat kept their faces towards the wall. I trained my eyes on the officer with a smile pasted on my face, trying to find some footing.

“Hi, officer, can Jamal and Terrell come inside?” I tried to keep my eyes steady, even as I winced on the inside. I didn’t want to ask a question — especially one that might result in a “no” — but I had few options.

“You know these guys?” he asked back.

“I know Terrell and Jamal. They are seniors here. This is Austin Alternative School. Right here. This building. I’m the principal. So nice to meet you. They were coming early to help me out with some books. They are always helping out.”

RELATED: Raising a Black son in a white world

As my mouth moved, I slowly made my way to the door of the school, keys in hand.

“There were just gunshots down the street,” the cop said. “You should really be careful walking around here.”

“Yes, officer. Of course. So sorry to hear about the gunshots. That’s awful. OK, well, Jamal. Terrell. Time to get to work.”

I unlocked the door and held it open wide. The rectangle glass and metal anchored me to my purpose.

Jamal was closest to the door and had been watching me move and babble the whole time. Now, we locked eyes and he moved slowly toward the entrance, keeping his back to the cop. We kept eye contact until he was through the threshold and inside the school.

Terrell was further away from the door and hadn’t moved. I shifted my weight from one foot to the other, still holding the door open with my whole body.

“Ma’am. I was coming to register,” one of the other boys said, catching my gaze.

“Yes, of course. I can help you with that right now. Come on in.”

The cop still had the baton in his hand but hadn’t moved since I started talking, except to turn and watch me walk towards the door.

I suddenly felt cold and the door I seemed to be getting heavier. The mantra in my head, incongruous to my surroundings, pulsed: light and sweet, light and sweet. I stared at Terrell, who still stood with his hands against the wall. How was I going to get him into the building?

“Terrell?” I called out.

With his head down, he turned toward me and began to walk towards the open door. The boy who had asked about registration followed Terrell in. When they reached the step before the door, I took a step forward to put myself between them and the cop who was standing back now, closer to the curb.

One of the other boys remained outside next to the young man with no coat, who turned his head towards the cop and said, “Can we go now?”

The cop took a step back and sheathed his baton.

“Look, if you know something, I need you to tell me. You can go for now,” he said, deflated.

As they rounded the corner and walked away, the cop turned to me. “Are those kids in school all day? Can I find them here later?”

I hurried inside and the door closed behind me. I audibly exhaled and then went straight to my office.

Jamal was there, staring at a Charles White print on the wall.

“Where is Terrell?” I asked.

“I think he and that other dude went out the other door. I don’t think Terrell will be back today.”

“You know how it always starts,” he said. “Cops trying to find someone who did something.”

I tried to replay the events from the street in my head to figure out what voice Jamal was talking about. Then the mantra bubbled to the surface: light and sweet.

I have been taught this tone, and to use it as a tool, since girlhood. How to smooth over and make everyone comfortable. The upbeat, slightly higher voice had become an unconscious part of me.

This is what Jamal heard.

My nerves continued to propel me around the room. I thought about the work the school does day to day, helping students earn their diplomas. We try to help students make a post-high school plan and think about goals for their futures. I wondered if anything we did really mattered at all if encounters like that are what waited for our students outside our walls.

I had tried to re-direct the cop to listen to a different narrative about our students. And that meant I couldn’t confront him about the threat he, an armed police officer, posed against unarmed, young Black men. At the time, I thought this is what I needed to do. I leveraged anything in my power — my whiteness, my femaleness — to diffuse the scene. Ultimately, I don’t know why he acquiesced to my request. I was at his mercy for a few minutes, but at very little personal risk, and yet still the incident left me shaken and despondent. Jamal and Terrell do not get to walk away from these encounters so easily.

Jamal continued to look at the table. “All I’m saying is that I wish I had a voice like that.”

Keema Spaghetti Is 4,500 Miles Away From Bolognese