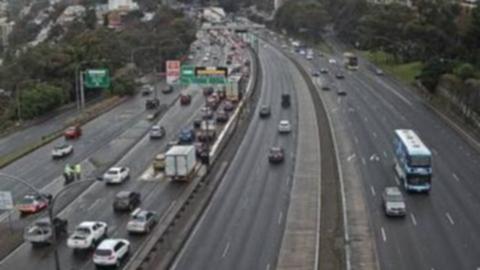 Sydney commuters will face another day of major train delays after negotiations between the transport union and the government failed to halt industrial action.

Rail, Tram and Bus Union secretary Alex Claassens told reporters on Thursday that a strike would go ahead with 70 per cent of train services cut and an altered weekend timetable.

Commuters have been warned to consider alternative travel on Friday or leave more time when catching trains due to the strike.

Roads are banking up with traffic as motorists are heeding warnings to avoid catching the train.

Traffic is slow on the Warringah Freeway heading southbound into the Harbour Tunnel as commuters make their way to work.

Congestion is building on the Eastern Distributor at Surry Hills and the City West Link Rd heading citybound.

Any travellers headed to Sydney airport are urged not to take the train.

The union is refusing to operate any foreign-made trains on Friday after repeated requests for the government to conduct safety repairs on the Korean-built New Intercity Fleet (NIF).

NSW Transport Minister David Elliott pledged $264m on Wednesday to fix the fleet despite believing that the trains were safe and did not require modification.

Mr Elliot told 2GB radio station the government had offered railway workers $3000 bonuses to get the fleet on the track without modifications.

“They’ve cut off their nose despite their face,” he said.

“They said we don’t want to take cash home to our families, we want you to have to spend $264m on trains that the safety regulator has independently assessed as perfectly good.”

The union is concerned that the new fleet relies solely on monitoring by CCTV cameras mounted on the sides of the trains, which have no audio and restricted line of sight because of the design of the carriages.

The government is yet to give any written commitment or signed documents to fix the new fleet – only draft proposals.

“I‘m not sure where we go from here,” Mr Claassens said.

“Disappointingly, the government have decided ‘oh no it’s all contingent on everything else being done.”

The union has notified Transport NSW there will be further action next Wednesday and Friday.

Denial of responsibility! Yours Bulletin is an automatic aggregator of the all world’s media. In each content, the hyperlink to the primary source is specified. All trademarks belong to their rightful owners, all materials to their authors. If you are the owner of the content and do not want us to publish your materials, please contact us by email – [email protected]. The content will be deleted within 24 hours.
australiaNewsNSW NewsNT NewspoliticsQLD NewsRegional WAState Politics
0
Share

Vegemite for mouth ulcers? Aussie blogger Mel Watts says this heals them in a day

This free online file converter has changed the way I work

Come Round the World in food, music and stories on October 13

Best hotels in Margate 2022: Where to stay for luxury, romance and a good night out