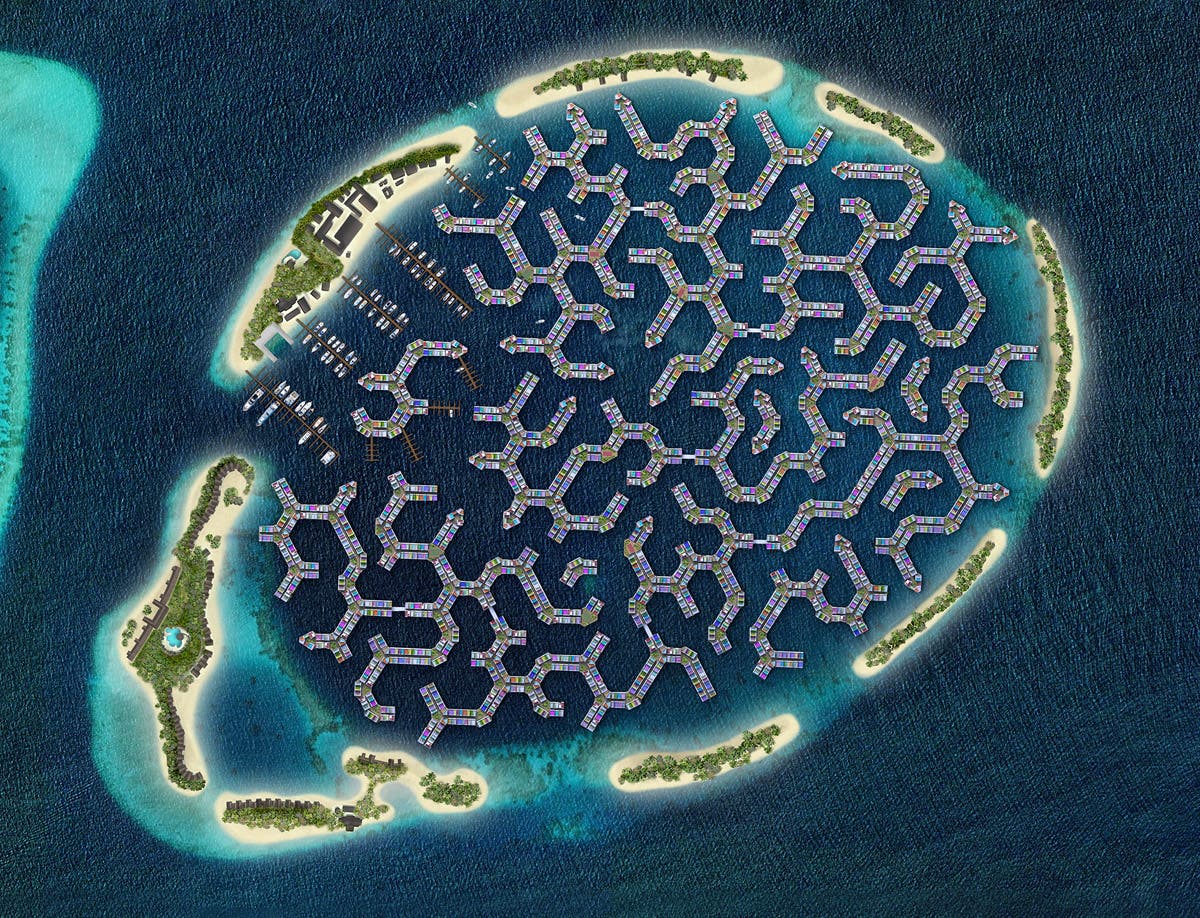 The Maldives government has unveiled plans for a “floating city” 10 miles from its capital, Malé, as part of plans to insure the country against rising sea levels.

Designed by Netherlands-based Dutch Docklands, the Maldives Floating City project will be a collection of islands across a lagoon, with thousands of low-rise, waterfront local homes equipped with jetties for boats.

The designers say hotels, restaurants, boutiques and a marina will join the residences to make it a destination in itself.

In a statement, the government described it as “the world’s first true floating island city — a futuristic dreamscape finally poised to become reality”.

Construction will start in 2022, with the city set to be completed in phases over the next five years.

It’s a separate project from Hulhumalé, a previously announced artificial, elevated island planned for the seas northeast of the capital, where sand has been pumped from the seabed to create a new surface.

The press release for the project says that “island barriers around the lagoon will serve as breakers down below”, while sandy beaches will “help stabilize and protect key structures” in the development.

“This Maldives Floating City does not require any land reclamation, therefore has a minimal impact on the coral reefs,” said former Maldives president Mohamed Nasheed, now a Speaker of Parliament in the country.

“What’s more, giant, new reefs will be grown to act as water breakers. Our adaption to climate change mustn’t destroy nature but work with it, as the Maldives Floating City proposes. In the Maldives we cannot stop the waves, but we can rise with them.”

It comes a meteorologists and climate scientists predict that the nation of more than 1,000 coral islands will be largely uninhabitable by 2050, as a result of rising sea levels.

Over 80 per cent of the Maldives’ coral islands stand less than one meter above sea level, putting them at risk of being swallowed by an ever-rising ocean surface.

Sea levels are rising by around 0.13 inches (3.2mm) each year, with the pace accelerating in recent years.

In November 2021, current president Ibrahim Mohamed Solih told world leaders at the United Nations climate conference: “The difference between 1.5 degrees and 2 degrees (Celsius) is a death sentence for the Maldives.”

Heathrow airport passenger charges to fall every year up to 2026

How to beat the long and frustrating passport queues

What Is Play-and-Earn by BeaRex and Why It Is…

Home sale prices from San Jose, The Peninsula and…