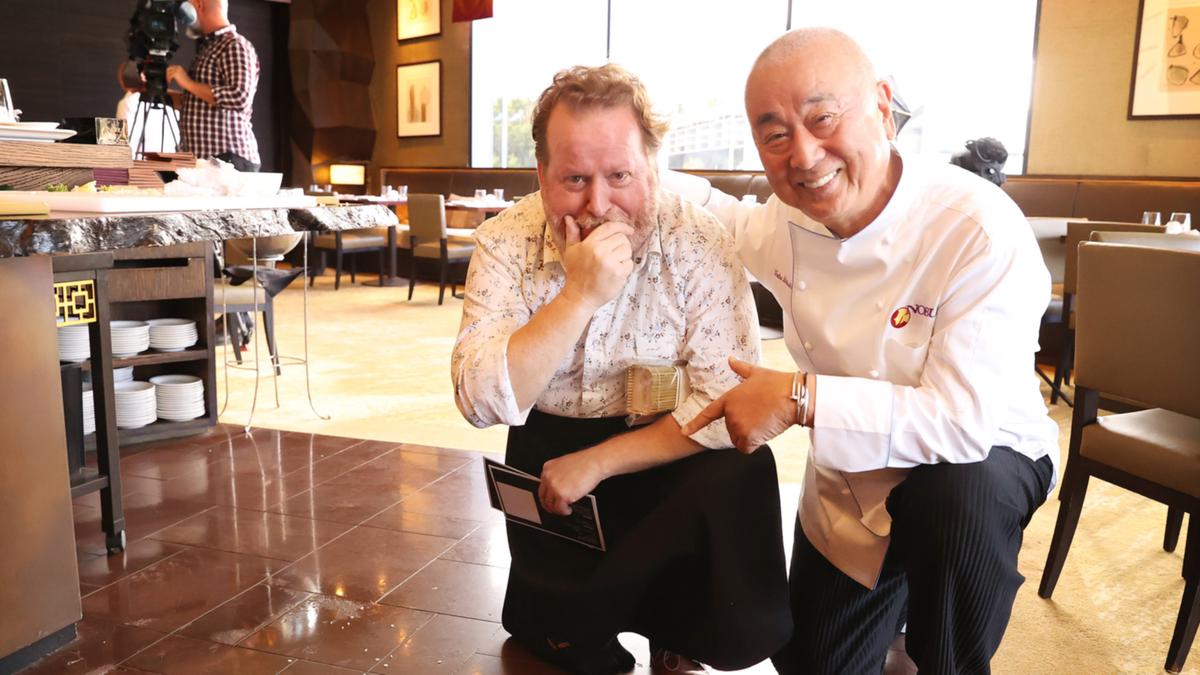 Friday was my first day as a sushi chef — and my last.

The sprightly 73-year-old warned that if I spilled any rice on the floor of his restaurant he would “throw a knife at me”.

By the end of the enlightening masterclass my sushi-making station resembled the steps of a wedding chapel — rice was everywhere.

While my Korean-born assistant Uno clearly wished he had a “skip” card, I have to say that my crispy nori roll was restaurant quality. It’s just a pity that restaurant was a truck-stop on the Nullarbor.

Matsuhisa’s masterclass was part of his first visit to Australia in five years for events at Nobu outposts in Melbourne, Sydney and here at Crown Perth.

He was due to host sold-out events on Friday night and Saturday with Nobu Perth chef de cuisine Pingping Poh.

The Los Angeles-based restaurateur, who would spend 10 months a year checking on his “children” before the pandemic, has had an incredible career marked by luck at both ends of the spectrum.

His first restaurant in Anchorage, Alaska was uninsured when it burned down to the ground a mere two weeks after opening in 1980.

“I almost tried to kill myself,” Matsuhisa said on Friday.

His career-changing pivot into Peruvian-influenced Japanese food only happened after a diner at Matsuei-sushi, the Tokyo restaurant where Matsuhisa trained as a sushi master, encouraged him to open his own restaurant in Lima.

“This is all my life experience, you know,” he said, looking around Nobu Perth.

“I like positive thinking. I say to the younger generation . . . you must try, even if you make a mistake, learn from the mistake.”

Matsuhisa, who opened the first Nobu restaurant in New York City in 1994, said that De Niro was both a good partner and friend, who eats “anything” besides oysters.

“I never think about retirement,” he said. “Age is just a number — age is physically and mentally how much I am strong.

“I like to work hard, and see all my family around the world.”

Returning to sensei mode, he said the most important ingredients in making sushi were fresh fish and steamed short-grain white rice.

Crispy nori seaweed is superior to the soggy stuff wrapped around most pre-made sushi rolls.

And, if you’re going to dip your nigiri sushi in soy sauce, then do so fish-side down.

“The most important key to making good sushi is heart,” the legendary chef said tapping his chest, before adding “and a very sharp knife.”

Denial of responsibility! Yours Bulletin is an automatic aggregator of the all world’s media. In each content, the hyperlink to the primary source is specified. All trademarks belong to their rightful owners, all materials to their authors. If you are the owner of the content and do not want us to publish your materials, please contact us by email – [email protected]. The content will be deleted within 24 hours.
foodFood & DrinkslifestyleTravel
0
Share

Megan Barton-Hanson says men come out to her on OnlyFans

Inside new £250m UK waterpark with 30 saunas and ‘living flume’

Economy flights from Moscow to Dubai hitting $5,000 as Russians flee

Bitcoin’s Sustainable Energy Output Could Be In…