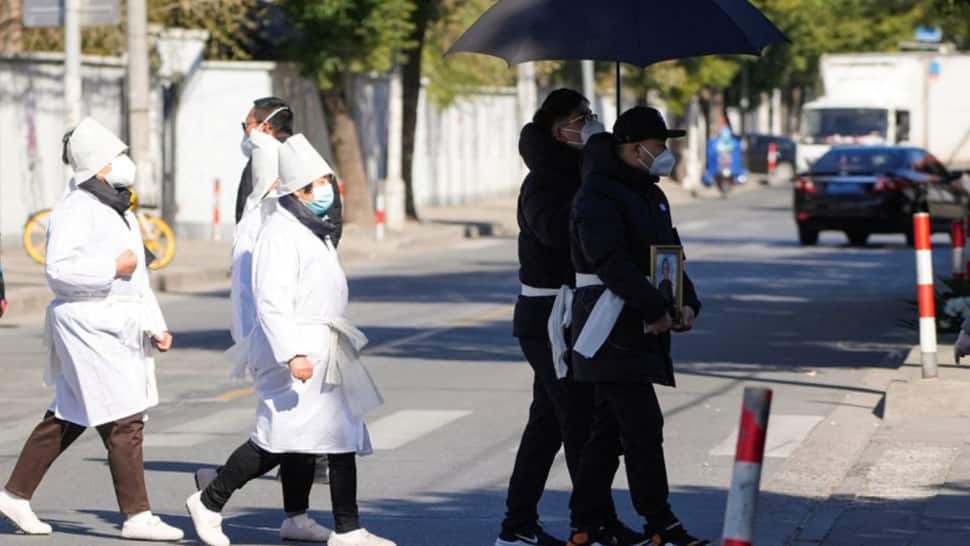 New Delhi: Amid global criticism of the country’s coronavirus data, China on Saturday (January 14, 2023) finally reported nearly 60,000 Covid-19-related deaths since it abandoned its zero-Covid policy last month. A health official said that Covid-19 fever and emergency hospitalisations had peaked and the number of hospitalised patients was continuing to decline.

Jiao Yahui, the head of the Bureau of Medical Administration under the National Health Commission (NHC), told a media briefing that between December 8 and January 12, the number of Covid-related deaths in Chinese hospitals totalled 59,938. Of these fatalities, 5,503 were caused by respiratory failure due to coronavirus, while the remainder resulted from a combination of Covid-19 and other diseases, she said.

Jiao said the number of patients needing emergency treatment was declining and the share of patients at fever clinics who tested positive for Covid-19 was steadily falling as well.

The number of severe cases had also peaked, she added, though they remained at a high level, and patients were mostly elderly.

“The number of fever clinic visitors are generally in a declining trend after peaking, both in cities and rural areas,” she said.

It is notable that the coronavirus cases have surged in China, a nation of 1.4 billion, since early December, when it abruptly dismantled its strict three-year anti-virus regime of frequent testing, travel curbs and mass lockdowns after widespread protests.

China had previously reported just over 5,000 deaths since the pandemic began, one of the lowest death rates in the world.

Authorities had been reporting five or fewer deaths a day over the past month – figures inconsistent with long queues seen at funeral homes and body bags seen leaving crowded hospitals.

China, which last reported daily coronavirus death figures on Monday, has repeatedly defended the veracity of its data on the disease.

The World Health Organization (WHO), which earlier this week said that China was heavily under-reporting deaths from the virus and called for more information, on Saturday welcomed Beijing’s announcement, while renewing its plea for more detailed data.

The WHO said its Director General Tedros Adhanom Ghebreyesus had spoken with director of China’s National Health Commission Ma Xiaowei about the latest outbreak, which the UN agency said was similar to what had been seen in other countries.

Concerns over data transparency were among the factors that prompted more than a dozen countries to demand pre-departure Covid-19 tests from Chinese travellers.

Beijing, however, has objected to the curbs.

The peak of China’s Covid-19 wave is expected to last two to three months, and will soon swell over the vast countryside where medical resources are relatively scarce, a top Chinese epidemiologist has said.

Infections are expected to surge in rural areas as hundreds of millions travel to their hometowns for the Lunar New Year holidays, which officially start from January 21, known before the pandemic as the world’s largest annual migration of people. But the worst of the outbreak was not yet over, warned Zeng Guang, the former chief epidemiologist at the Chinese Center for Disease Control and Prevention, according to a report published in local media outlet Caixin on Thursday.

“Our priority focus has been on the large cities. It is time to focus on rural areas,” Zeng was quoted as saying.

He said a large number of people in the countryside, where medical facilities are relatively poor, are being left behind, including the elderly, the sick and the disabled.

Chinese virologists said on Friday they have discovered one infection with the Omicron subvariant XBB.1.5, which has been described by WHO scientists as the most transmissible sub-variant so far after its rapid spread in the United States in December.

Denial of responsibility! Yours Bulletin is an automatic aggregator of the all world’s media. In each content, the hyperlink to the primary source is specified. All trademarks belong to their rightful owners, all materials to their authors. If you are the owner of the content and do not want us to publish your materials, please contact us by email – [email protected]. The content will be deleted within 24 hours.
china covid deathsChina Covid-19China Covid-19 casesChina newscoronaviruscovid-19
0
Share