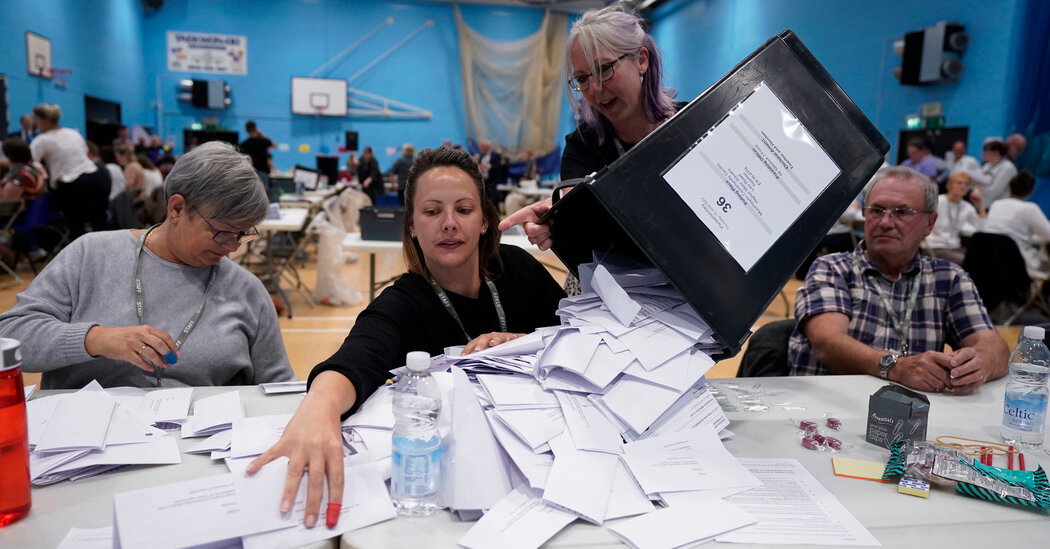 The double defeat is a stinging rebuke of Mr. Johnson, who survived a no-confidence vote in his party this month, precipitated by a scandal over illicit parties held at Downing Street during the coronavirus pandemic. It will most likely revive talk of another no-confidence vote, though under the party’s current rules, Mr. Johnson should not face another challenge until next June.

In elections on Thursday, voters in Tiverton and Honiton, a rural stretch of southwest England that is the party’s heartland, and in the faded northern industrial city of Wakefield evicted the Conservative Party from seats that had come open after lawmakers were brought down by scandals of their own.

The Labour Party’s victory in Wakefield was widely expected, and it ran up a comfortable margin over the Conservatives. In the south, which had been viewed as a tossup, the Liberal Democrats scored a stunning upset, overcoming a huge Conservative majority in the last election to win the seat by a solid margin.

It was the first time a governing party had lost two seats in a parliamentary by-election since 1991. And as grim as the electoral prospects for the Conservatives look, they could worsen further in the next year, with galloping inflation, interest rate hikes and Britain almost certainly heading for a recession.

The political fallout was swift and stark: Oliver Dowden resigned his job as a chairman of the Conservative Party on Friday morning in a letter sent to Mr. Johnson less than two hours after the votes had been counted. The party’s supporters were “distressed and disappointed by recent events, and I share their feelings,” Mr. Dowden wrote, adding that “somebody must take responsibility.”

A longtime ally of Mr. Johnson, Mr. Dowden pointedly professed his loyalty to the Conservative Party, rather than to its leader. But on Friday, Mr. Johnson showed no signs of reconsidering his position, even as he acknowledged the defeats and promised to listen to the voters.

“Midterm governments, postwar, lose by-elections,” said the prime minister, who is attending a meeting of the leaders of the Commonwealth in Kigali, Rwanda.

“We are facing pressures on the costs of living,” Mr. Johnson added. “We are seeing spikes in fuel prices, energy costs, food costs, that is hitting people. We have to recognize that there is more that we have got to do and we certainly will, we will keep going addressing the concerns of people until we get through this patch.”

Rishi Sunak, the chancellor of the Exchequer, offered his support to the prime minister, echoing his explanation of the defeats and accepting some of the blame. “We all take responsibility for the results and I’m determined to continue working to tackle the cost of living,” he wrote on Twitter.

Mr. Sunak had been seen as a potential successor to Mr. Johnson until his popularity plummeted this year, and — although other senior ministers kept noticeably quiet — his statement suggests that a coordinated cabinet move against the prime minister was unlikely.

However, one senior Conservative figure, Michael Howard, called for the resignation of a prime minister now seen by many as an electoral liability. “The party, and more importantly the country, would be better off under new leadership,” Mr. Howard, a former Tory leader, told the BBC, adding, “Members of the Cabinet should very carefully consider their positions.”

The defeats exposed Conservative vulnerabilities on two fronts: the so-called red wall, in the industrial north of England, where Mr. Johnson shattered a traditional Labour stronghold in the 2019 general election, and in the southwest, a traditional Tory stronghold often called the “blue wall.”

In Tiverton and Honiton, where the Liberal Democrats won 53 percent of the vote to the Conservatives’ 39 percent, the victorious candidate, Richard Foord, said the result would send “a shock wave through British politics.” The Liberal Democrats’ leader, Ed Davey, called it “the biggest by-election victory our country has ever seen.”

The Labour leader, Keir Starmer, said that his party’s victory in Wakefield, where Simon Lightwood won a solid 48 percent of the vote to the Conservative candidate’s 30 percent, was “a clear judgment on a Conservative Party that has run out of energy and ideas.”

While the political contours of the two districts are very different, they share a common element: a Conservative lawmaker who resigned in disgrace. In Tiverton and Honiton, Neil Parish quit in April after he admitted watching pornography on his phone while sitting in Parliament. In Wakefield, Imran Ahmad Khan was sentenced to 18 months in prison in May after being convicted of sexually assaulting a teenage boy.

Mr. Khan’s legal troubles, which included multiple unsuccessful efforts to have his case heard secretly, meant that Wakefield did not have a functioning representative in Parliament for two years.

“The whole unfortunate situation is about a broken political system that ignores the voters and their wishes, and politicians who don’t do the right thing or serve the people who got them into power,” said Gavin Murray, editor of the Wakefield Express newspaper. “This point is amplified and exaggerated by the behavior of Boris and Downing Street.”

The giant swing in votes in Tiverton and Honiton, a usually safe Conservative district where the party had hoped to hold on, was even more sobering for Mr. Johnson. It suggested that even the most loyal Tory voters had become disenchanted with the serial scandals and nonstop drama surrounding the prime minister.

The government has promised to “level up” and bolster the economy in northern England, a reward to the red-wall voters. But some analysts see a significant risk of support fracturing among traditional Tories in the south.

The Liberal Democrats specialize in fighting on local issues in by-elections. They have a long history of achieving surprise results, and success for them in Tiverton and Honiton consolidated the party’s strong performance in local elections in May, where they also emerged the big winners.

In the days leading up to the two elections, Labour and the Liberal Democrats both concentrated their resources in the districts they were better placed to win, leaving the other a freer run. Worryingly for Mr. Johnson, that tactic proved effective.

Vince Cable, a former leader of the Liberal Democrats, said that rather than any official cooperation between the two parties, there was a “tacit understanding, relying on the voters to get to a sensible outcome.”

“Because the economic outlook is so awful, certainly for the next 12 to 18 months, it wouldn’t surprise me if Johnson did something very risky and went for an autumn election,” Mr. Cable said at an election-eve briefing.

That is a remarkable reversal of fortune for a party that won an 80-seat majority in Parliament only two-and-half years ago on the strength of Mr. Johnson’s promise to “get Brexit done.”

Kenneth Baker, a former chairman of the Conservative Party and a member of the House of Lords, said that Mr. Johnson was now too polarizing a figure.

When do babies get the polio vaccine?