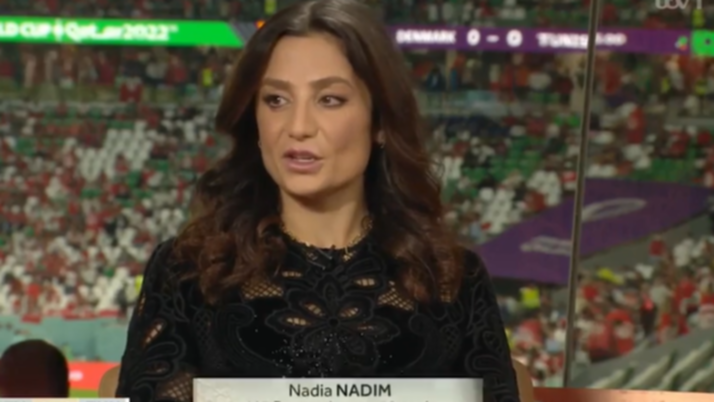 A World Cup presenter was forced off air after receiving the horrific news her mother had been killed by a truck.

Nadia Nadim is currently in Qatar working for ITV for the UK broadcaster’s coverage of the World Cup.

WATCH THE VIDEO ABOVE: Nadia Nadim appears on the broadcast before making an urgent exit.

The 34-year-old was part of the panel for ITV’s coverage of Denmark’s game with Tunisia on Tuesday.

However, tragedy struck when Nadim suddenly had to leave the studio.

Nadim’s mother had been killed while she was on air.

Nadia said her mother was hit by a truck while she was on her way home from the gym on Tuesday morning.

“Words cannot describe what I’m feeling,” she said in a statement on social media.

“I have lost the most important person in my life, and it happened so sudden and unexpected. She was only 57.

“She was a warrior who had fought for every inch of her life. She didn’t give me life once, but twice, and everything I/ we are is because of her.

“I have lost my home and I know nothing is gonna ever feel the same. Life is unfair and I don’t understand why her and why this way. I love you and I will see you again.

“Her funeral is (going to) be soon… please come and show her the love, respect and prayers she deserves.”

It’s not yet clear where Nadia’s mother was killed.

Nadia who was born in Afghanistan, currently plays as a striker for Denmark’s national team.

According to The Sun, Nadim fled Afghanistan in 2000 when the Taliban executed her army general father.

At age 11, Nadia left the country with her mum and four sisters.

She later went on to discover her love of football at a refugee camp in Denmark and is now on their national team.

Denial of responsibility! Yours Bulletin is an automatic aggregator of the all world’s media. In each content, the hyperlink to the primary source is specified. All trademarks belong to their rightful owners, all materials to their authors. If you are the owner of the content and do not want us to publish your materials, please contact us by email – [email protected]. The content will be deleted within 24 hours.
fifa world cupfootballNewssportworld news
0
Share

Soccer legend Pelé says he is “strong” and has “hope” amid…