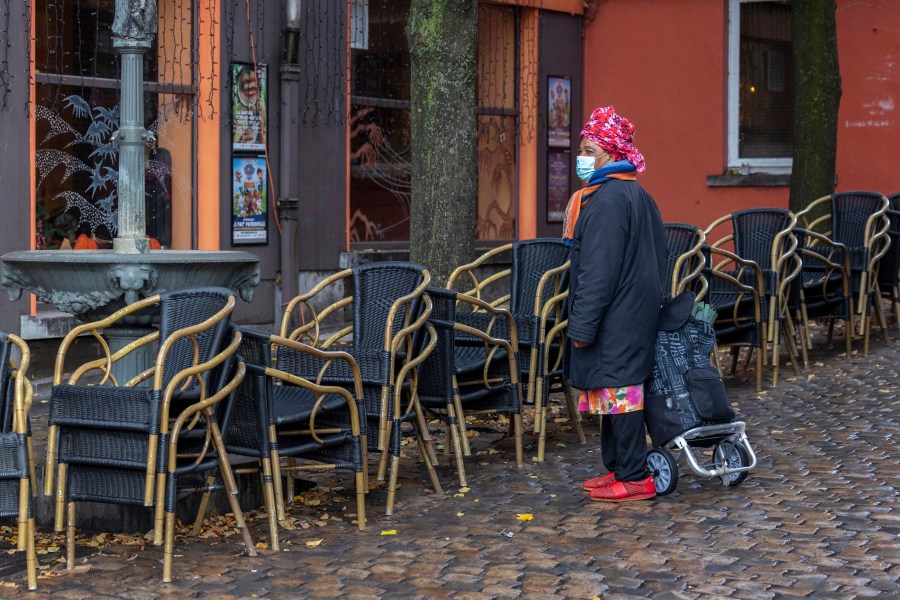 THE HAGUE (AP) — Nations across Europe took new measures Friday in an attempt to keep a COVID-19 spike from spiraling out of control, hoping that action now will safeguard the joys of Christmas next month.

A spike in cases fueled by the contagious delta variant forced governments to act to rein in infections even in countries not seeing surges and where vaccination rates are high.

Meanwhile, the world on Friday was confronted with yet another challenge in its long pandemic ordeal: the discoveryof a new, potentially more transmissible COVID-19 variant found in southern Africa — which the World Health Organization on Friday named “Omicron” under its Greek letter system.

In Belgium, where a spike in cases and hospital admissions exceeded even the worst medical predictions, Prime Minister Alexander De Croo reinforced measures for the second time in little more than a week and closed night clubs, while bars and restaurants have to shut at 11 p.m. for the next three weeks.

“We have been hoodwinked by the delta variant,” he said.

Referring to the more than 25,000 cases a day now in the country of 11 million, he said: “This is unprecedented in our country.”

Neighboring Netherlands has been struggling with the virus just as much.

Health Minister Hugo De Jonge said hospitals across the Netherlands have been told to wind back planned surgeries and scale up acute care and intensive care beds to 1,350 nationwide to cope with the rising number of COVID patients.

The Dutch government tightened its lockdown Friday night amid swiftly rising infections and ICU admissions, although it kept open schools and universities — where most students will have to wear masks in corridors between lessons.

Caretaker Prime Minister Mark Rutte said that for three weeks starting Sunday all venues such as bars, restaurants, theaters and shops selling non-essential items will close from 5 p.m. to 5 a.m. Under the current lockdown they have to close at 8 p.m.

“The numbers are high, higher, highest,” Rutte said of the soaring infections.

He said a panel of experts had advised the government to take action to reduce the number of contacts between people by at least 20%.

“That means we won’t get there with a few small tweaks. And that’s why we’re here today, a week earlier than hoped, with another message that is going to demand a lot from all of us,” Rutte said.

He urged people to stay in and work from home as much as possible and extended the use of face masks and social distancing to cover locations where the country’s COVID pass is already in use.

As Rutte spoke, a few dozen protesters demonstrated noisily, but peacefully, in a nearby street, blowing whistles and sounding sirens. Some held posters that read, in Dutch: “It’s not right.”

In Spain and Portugal, where rates of infections are lower than most of Europe, authorities were also reinstating previous restrictions or adding new ones.

In Spain, despite having fully vaccinated 79% of its 47 million residents and hospital admissions increasing at a slower pace than in previous surges, the mandatory use of the so-called COVID-19 passes is becoming widespread.

In northeastern Spain’s Catalonia the passes were supposed to become mandatory from Friday to enter bars, restaurants, gyms, nightclubs and nursing homes. But authorities in the region said they were temporarily halting the order due to an overwhelming number of requests for the passes.

The Catalan health department said in a statement that it had received more than 700,000 requests for the passes in the four days leading to Friday. Health authorities said that implementing the mandatory passes will be reconsidered next week.

In Portugal, less than two months after scrapping most of the pandemic’s tighter restrictions, the government on Thursday announced it would restore some of the measures such as mandatory face masks in enclosed spaces or the digital certificate required to enter some venues. Even inoculated people must have a negative test to visit hospitals, elderly care homes, sports events and bars and discos.

And in Italy, where the COVID situation was under control compared with neighbors like Austria, mayors in cities including Milan, Bologna, Padova and Bergamo, were imposing mask mandates for the holiday season. New restrictions also were expected in Rome.

Denmark, meanwhile, said Friday that it plans to start offering COVID-19 vaccination shots to children from 5 to 11 years beginning this weekend after the European Union regulator authorized Pfizer’s vaccine for kids on Thursday.

“Our assessment is that by offering children in the target group, we can increase immunity and break down infection,” said Helene Probst, deputy head of the Danish Health Authority. “We need this.”

She said Denmark is “in the midst of a historic health crisis.”

The government’s green strategies in a nutshell