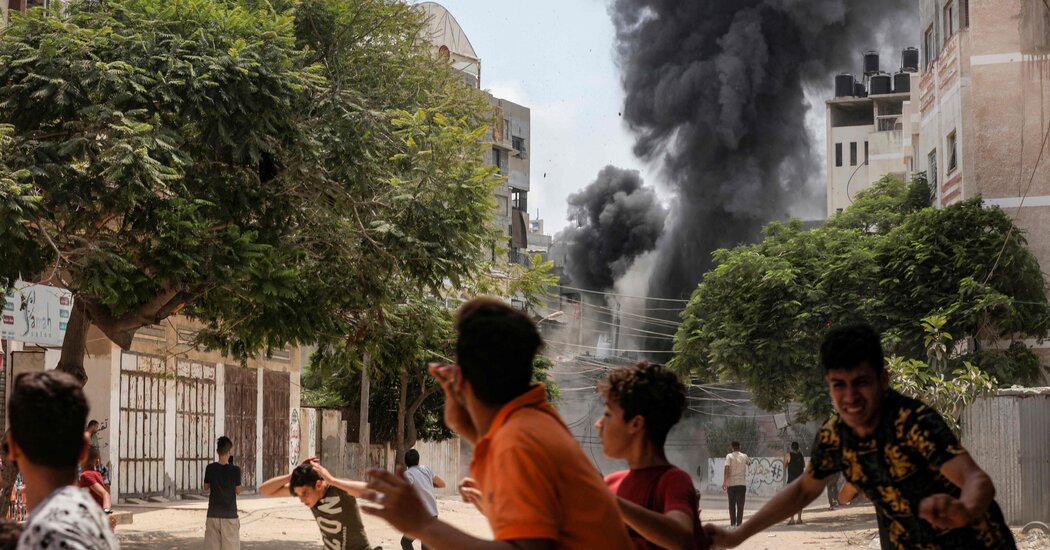 Hamas has largely remained on the sidelines in the fighting in Gaza on Saturday, raising the chances that the current round of cross-border violence could be contained in both scope and duration.

The leader of Hamas’s political bureau, Ismail Haniyeh, has made noncommittal statements, saying that Israel bears full responsibility for the latest escalation without elaborating on Hamas’s own intentions.

One reason may be jobs. Since the last major Gaza conflict in May of last year, Israel has shifted its policy toward Gaza in what officials have described as an effort to keep the peace, offering economic incentives to the 2 million civilians in the coastal enclave and raising the stakes for Hamas should it decide to join the hostilities.

Israeli security officials have issued thousands of permits to Gaza residents allowing them to enter Israel daily to work in agriculture and construction. About 14,000 Palestinian laborers from Gaza have been working in Israel over the past few months, the largest number since Hamas gained control of the Gaza Strip in 2007, and Israel has promised to raise the number to 20,000.

Beyond that economic incentive, the Israeli military also has been warning of the dire consequences of another major round of fighting in Gaza. Military officials have publicized what they describe as intelligence reports showing Hamas tunnels and other military infrastructure constructed in the heart of Gaza’s residential areas, suggesting civilian casualties would be almost unavoidable in a military campaign.

In addition to the job permits, Israel also has allowed improvements in recent months that have enlarged the water and electricity supply in Gaza and expanded the capacity for imports and exports.

More medical equipment has been imported, and exports of agricultural produce from Gaza and its fisheries, textile and furniture industries have nearly doubled in the first half of this year compared to the same period last year, military officials said.

But in recent days, as Islamic Jihad threatened to retaliate from Gaza for Israel’s arrest of one of the group’s senior commanders in the West Bank, Israel closed the border crossings, preventing the movement of people and goods in and out of Gaza. Israeli residents living close to the border were effectively placed under a curfew, with all roads closed in the areas close to Gaza.

Maj. Gen. Ghasan Alyan, the head of the military agency responsible for liaising on civilian matters in the occupied West Bank and Gaza, conveyed a stark message to Hamas on Friday, outlining the choice it faces regarding supporting Islamic Jihad or staying out of this round of fighting.

“The responsibility rests with Hamas,” he said, in a video released on the agency’s Arabic Facebook page. “Is it more concerned with helping the residents of Gaza, or with helping dissident organizations?”

Hamas’s decision to remain on the sidelines so far was reminiscent of a short round of cross-border fighting in 2019. That cycle, too, opened with an Israeli airstrike that killed a senior Islamic Jihad commander, Baha Abu al-Ata, along with his wife, Asmaa Abu al-Ata, and prompted Islamic Jihad to fire hundreds of rockets into Israel.

Over the next two days, Israel killed 34 people in Gaza, including about two dozen militants and several children. But Hamas chose not to join in, containing the scope of the hostilities.

By contrast, it was Hamas that initiated the last major Gaza conflagration in May 2021, when it fired a barrage of rockets toward Jerusalem after weeks of rising Israeli-Palestinian tensions and clashes in the contested city.

More than half a million tons of grain exported from Ukraine, says UN

Why the N.B.A. Won’t Schedule Games on Election…