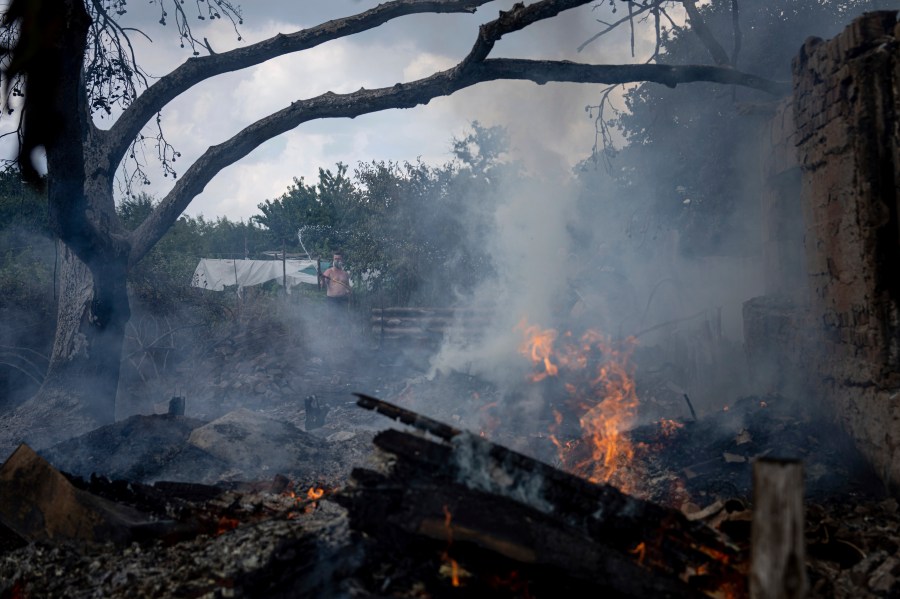 Both cities of Bakhmut and Avdiivka have been considered key targets of Russia’s ongoing offensive across Ukraine’s east, with analysts saying Moscow needs to take Bakhmut if it is to advance on the regional hubs of Sloviansk and Kramatorsk.

“In the Donetsk direction, the enemy is conducting an offensive operation, concentrating its main efforts on the Bakhmut and Avdiivka directions. It uses ground attack and army aviation,” the Ukrainian General Staff said on Facebook.

The last Russian strike on Sloviansk was July 30, but Ukrainian forces are fortifying their positions around the city in expectation of new fighting.

“I think it won’t be calm for long. Eventually, there will be an assault,” Col. Yurii Bereza, head of the volunteer national guard regiment, told The Associated Press.

Russian shelling killed five civilians and injured 14 others in the Donetsk region in the last day, Donetsk governor Pavlo Kyrylenko wrote Saturday on Telegram, saying two people were killed in Poprosny, and one each in Avdiivka, Soledar and Pervomaiskiy.

The governor of the eastern Dnipropetrovsk region said three civilians were injured after Russian rockets fell on a residential neighborhood in Nikopol, a city across the Dnieper River from the Zaporizhzhia nuclear power station. The nuclear plant has been under Russian control since Moscow’s troops seized it early in the war.

“After midnight, the Russian army struck the Nikopol area with (Soviet-era) Grad rockets, and the Kryvyi Rih area from barrel artillery,” Valentyn Reznichenko wrote on Telegram.

Another Russian missile attack overnight damaged unspecified infrastructure in the regional capital of Zaporizhzhia. On Thursday, Russia fired 60 rockets at Nikopol, damaging 50 residential buildings in the city of 107,000 and leaving residents without electricity.

Rafael Grossi, head of the International Atomic Energy Agency, warned this week that the situation was becoming more perilous day by day at the Zaporizhzhia plant.

“Every principle of nuclear safety has been violated” at the plant, he said. “What is at stake is extremely serious.”

He expressed concern about the way the plant is being operated and the danger posed by the fighting going on around it. Experts at the U.S.-based Institute for the Study of War said Russia is shelling the area intentionally, “putting Ukraine in a difficult position.”

The Ukrainian company operating the nuclear power station said Saturday that Russian troops are using the plant’s basement to hide from Ukrainian shelling and have barred its Ukrainian staff from going there.

“Ukrainian personnel do not yet have access to these premises, so in the event of new shelling, people have no shelter and are in danger,” Enerhoatom, a Ukrainian state enterprise, said on its Telegram channel.

Enerhoatom said Friday that Russian rockets had damaged the plant’s facilities, including a nitrogen-oxygen unit and a high-voltage power line. Local Russian-appointed officials acknowledged the damage, but blamed it on the Ukrainians.

__ In Ukraine’s south, two civilians were seriously injured Saturday after Russian forces fired rockets on the Black Sea port of Mykolaiv before dawn, according to regional authorities. That followed a Friday afternoon attack on Mykolaiv that killed one person and wounded 21 others.

__The first of three more ships carrying thousands of tons of corn from Ukraine anchored north of Istanbul on Saturday awaiting inspection, the Turkish Defense Ministry said. The Panama-flagged Navi Star, which is carrying 33,000 tons of grain to Ireland, left Odesa on Friday. It is being followed by the Turkish-flagged Polarnet and the Maltese-flagged Rojen, carrying over 25,000 tons of corn between them from Chornomorsk. The joint inspection center was set up to get grain blocked in Ukraine by the war to the world. On Friday, the center inspected its first north-bound ship as it headed for Chornomorsk.

__In the north, Ukraine’s second-largest city of Kharkiv and its surrounding area also came under Russian rocket fire again overnight, according to regional governor Oleh Syniehubov. A 18-year-old in Chuhuiv, a town near Kharkiv, had to be hospitalized Saturday after he picked up an unexploded shell. Both Chuhuiv and Kharkiv are near the Russian border and have endured sustained Russian shelling in recent weeks.

__The neighboring Sumy region, which also borders Russia, has also seen near-constant shelling and missile strikes. Its governor said Saturday the region was hit more than 60 times from Russian territory over the previous day, and one wounded civilian had to be hospitalized.

__ On the ammunition front, Russia has begun using Iranian combat drones in the war, Ukrainian presidential adviser Oleksiy Arestovych said in a YouTube adding that Tehran had transferred 46 drones to the Russian army.

Follow all AP stories on the war in Ukraine at https://apnews.com/hub/russia-ukraine.

‘Was I vaccinated for polio?’ and other questions, answered

US President Joe Biden to sign massive climate and health care legislation : The…